All my adult life (and most of my childhood) I have owned and ridden bicycles, yeah sure I drive, I learned to drive at 17 and was for a time in my twenties a fully qualified driving instructor, but driving these days just ain’t as much fun as riding a bike. I bought my current bike, a Norco Volante, about six years ago and it has served me well. However, as everyone who cycles knows, the ideal number of bikes can be calculated be the simple mathematical equation i=n+1, where i is the ideal number of bikes and n the number of bike currently owned. So when a friend of mine said that he was going to upgrade his bike with a custom made Ti frame, and did I want his old frame, I leapt at the chance. Thanks Steven!

I was told it would just be a bare frame as all the other components were to be moved to the new frame. However, when the box arrived I found there were a number of other bits which hadn’t been used with the new frame for one reason or another. Just to recap, my new “half bike” is the remains of Genesis Croix de Fer (2009 model) which is a steel framed cyclo-cross bike, with a carbon fork and formerly had cable disc brakes (which is unusual for a cyclo-cross bike, apparently, but something I intend to reinstate).

The box of bits having arrived, I thought it best to check that the frame is the right size for me and to find out what size the new components need to be, before going any futher. I decided that the best way of doing this was to nip down the road to The Tri Centre for a
bike fitting, a bargain at £35. Now, I like The Tri Centre the staff are very friendly and knowledgeable, and the places is stuffed full of bike bling. If I were ever to win the Lottery it would be my first stop in the search for the ideal bike. Of course there is no such thing as the ideal do it all bike, so it would have to be i=n+1 and with a lottery jackpot The Tri Centre is a good place to start.

Mean while back to the story, the bike fitting showed that the was about the right size for me (although I could do with a longer top tube) and with the right sized components could be tweaked to be a good fit. So starts the shopping list; first off wider bars drop (440 mm, the original Genesis Croix de Fer bars were 420mm) and a longer stem (125 mm, the original Genesis Croix de Fer stem was 110mm), the ones in the box will no doubt be welcomed at the Bike Station. Also I now know that when I come to buy, the length of cranks I need is 170 mm. The rest of the drive train I have yet to decide on, but given that I have inherited Shimano 105 STI levers and Shimano 105 Derailleurs, so I have options open to me. As I say above, I am going for disc brakes as I like the better modulation and stopping power of discs, and the fact that you can stop in the wet, also that your rims last longer. The choice here is cable (mechanical) or hydraulic disc brakes, my preference is for cable as they are cheaper and easier to maintain. The original specification gives the brakes as “Shimano BR-R505 Disc”, but I might look around and see if there is a better choice. Then there is the wee matter of wheels, a pair of Bontragers has been suggested, but I am not sure, maybe it would be better to get the rims, disc hubs and spokes separately and have Andrew at the Bicycle Works build them up for me. Or should I take a one day wheel building class at the Bike Co-op and then use the jig at the Bike Station?

Other bits, such as the seat post, saddle and pedals are easy, that is the sort of thing I have already done with my Norco, but I have never actually built a bike before, this is a big learning curve for me. So suggestions are welcome, Oh, and Bernhard, if you are reading this, you are welcome to ride my spare bike next time you visit, so long as you help me build it first… 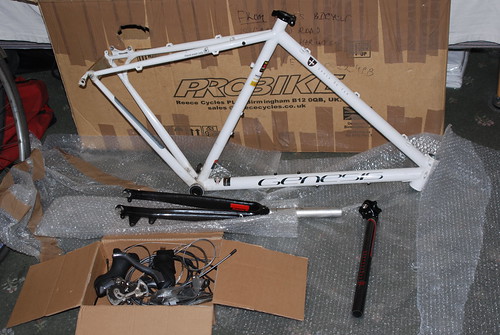 Addendum: Since writing this post, I have found a number of people visiting this series of posts wanting to build their own bicycle using the Genesis Croix de Fer frame set. While I was given my Genesis CdF frame and fork, I have found that you can now buy the frames here and here.

2 thoughts on “Bike build project (part 1): One and a half bikes”