The three of us, Ulli, her cousin Bernhard (visiting on holiday) and myself, were looking for a cycle tour. I had originally intended to use my new bike but we haven’t gotten around to building it yet, something for a rainy day, after we got back.

We had thought of doing something in the west, maybe a few of the islands over several days, but then the weather intervened. So we decided that a trip into the Borders might be a better option, and to keep it to just two days. Knowing that Bernhard liked hills, Ulli and I had a particular hill in mind, which suggested a route over the Lammermuir Hills. We talked about staying overnight at a place in Coldstream where Ulli and I had been before, but decided we wanted to try something new instead. Duns was chosen as a target area, a quick internet search turned up a suitable looking B&B at a place called Ravelaw, which was swiftly booked. Accommodation sorted, all that was left was to plan a route and ride there.

The early parts of the route were relatively straightforward as we were on home ground. For the first part, instead of just picking up the NCN1, Ulli decided which should use the Joppa variation. The Joppa variation has the advantage of avoiding the not so cycle friendly bridge at Brunstane Station. However, it has the disadvantage of a lot of streets with setts. It should be noted at this point that Ulli has the bike with the widest tyres, but it gave us the chance to joke about training for the Paris–Roubaix, once our teeth had stopped rattling.

Past Brunstane Station we joined the NCN1 and followed it out to Whitecraig, just before Whitecraig there is a short steep slope. As we approached I saw two cyclists up ahead at the start of the slope, and decided to take the first few points towards the polka dot jersey, knowing full well these were likely to be the only points I would get on the whole trip. The two cyclists were a wee bit surprised to be overtaken, at speed, by a hybrid bike with loaded panniers on the back, probably because they didn’t know that this was a cat four climb and there were points at stake (OK, I am getting sad in my old age).

As usual we parted company with the NCN1 at Whitecraig, choosing to turn west to Smeaton and on up past the bing on Smeaton Shaw, which is currently being rearranged to make way for a recycling centre. Currently this area is something of a mess. Before the landscaping began, the bing was partly hidden by trees, and in about 20 years time it will be again. We were fortunate that there were no heavy lorries about as we cycled on to Chalkieside to join the old railway which once served the coal pit which produced the bing. Once on the old railway, which is part of Regional Cycle Route 73, we were relatively sheltered from the wind as we rode to Pencaitland.

I haven’t mentioned the wind so far, and this is a good point in the story to bring it in. The weather was bright and sunny, but rather inconveniently the wind was blowing from the South East, straight into our faces. As the day went on, the wind seemed to get stronger, records from Charterhall showed the average wind speed to be 18 mph (28.9 Km/h), gusting to 30 mph (48.3 Km/h). Not the easiest cycling conditions, but I have ridden in worse.

At Pencaitland we rejoined the road and headed on through the Saltoun’s towards Gifford, past East Saltoun we found that the road was being resurfaced. Fortunately for us, the east bound carriageway had been done first and was now beautifully smooth, which made progress a lot easier, in spite of the wind. This was a good thing, as lunch was now calling, and I sprinted into Gifford, only to find that the café (Love Coffee… …and Food?) was already full of cyclists. At first I thought it was some sort of club run, but it turned out they were just couples and small groups who had all turned up around lunch time. No wonder the owners, Pam and Craig, are so keen on cyclists, they have in the past said that these are their favourite customers, now they are talking about selling “Love Coffee… …and Food?” cycle jerseys. Anyway, we managed to find a wee bit of space and had some lunch, and a bit of chat and banter with some of the other cyclists.

Lunch over, we set out again, taking the scenic route which take you around Yester House (said to be Scotland’s most expensive house, although it didn’t fetch the asking price of £15m or probably even the reduced price £12m. In fact, it would appear to be still for sale), but you never actually get you a view of it from the road. You do however get some good views of the Lammermuir Hills and the road up Newlands Hill to Redstone Rig. Turning on to the B6355, I became aware that we were not going to be alone going up to the Rig, there was a Dutch car rally going the same way. This was unfortunate, as the Dutch are some of the worst drivers in Europe, the concept of sharing the roads with cyclists is somewhat alien to them, which was probably why Dutch cyclists need separate cycle lanes. Local drivers were giving me plenty of room, but not the Dutch. All I wish to say to the driver who came within 60cm of me is “Krijg kanker en ga dood, Hoerenjong!” OK, that has got that off my chest, back to the story.

As you reach the foot of the climb, there is a combination of road sign and road marking which suggests that someone in the ELC transport department might have a sense of humour, or maybe not. 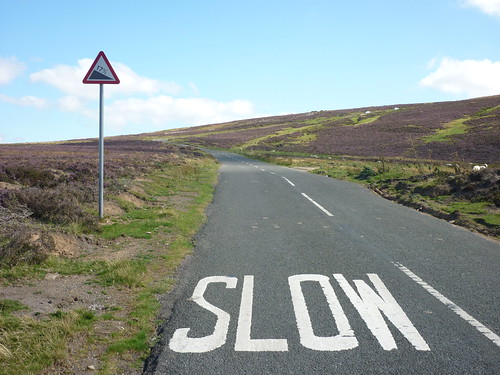 I mean, who else would tell you to slow as you hit a 17% uphill gradient? Given that we were going straight into a strong and gusty South Easterly wind, I took the instruction literally. For me this is a nemesis hill, I have yet to get up it without getting off the bike. Then again trying it without panniers weighing 10 Kg or so would probably be a good idea. Bernhard, on the other hand, just sailed up the hill (a pretty impressive feat directly into the wind), but then he is a veteran of the Ötztaler Radmarathon. So there was never any doubt of who was going to win the polka dot jersey.

Having reached the top, we were presented with the choice of continuing in a SE direction over the tops towards Longformacus or turning east and taking the low road via Cranshaws. This wasn’t a difficult decision, we took the low road, but it still wasn’t an easy ride. On a previous occasion, riding down the road past Mayshiel I hit a top speed of 69.4 Km/h, this time I was struggling to get up to 50 Km/h (I can get up to that speed on the flat). Further down the road, the Whiteadder Reservoir had white horses on it, with dinghies scudding back and forth on a beam reach. Fortunately when we came to the climb on the Hungry Snout, it was sheltered from the wind.

Passing Cranshaws, I saw the oddest tricycle I have ever seen, it was made from an ordinary child’s bike, but with two wheels mounted outboard of the front forks. Beyond Cranshaws, we crossed the Whiteadder at Ellemford Bridge for the last time and started up the dead pheasant highway. I have never known such a road for road kill, it was littered with dead pheasants and the odd rabbit thrown in for good measure, for about 2 Km.

We carried on to the end of the road where it met the main road between Duns and Preston (A6112). Here we were turning left, Bernhard was in the lead and abruptly switched over onto the right hand side of the road, closely followed by Ulli, I found myself loudly clearing my throat and saying in a loud voice “Links, links!”, fortunately there was nothing coming the other way.

Shortly afterwards, we turned right off the main road and wended our way through a maze of wee roads, crossed over the Blackadder and finally found Ravelaw Farm. By now we were getting tired and were confused at not seeing a B&B sign. We carried on another 200 m along the road and up a slight rise before seeing it. Having arrived, we were given a warm welcome and enjoyed a pleasant and comfortable stay.

One thought on “Spinning down to Duns”