Having struggled against a head wind all the way down the day before, we were sort of looking forward to having a tail wind helping us all the way home from Ravelaw (near Duns). Coming out of the B&B after a fine breakfast, we soon noticed the wind was still in the East South East and just as strong, if not stronger, than the day before. A later check of records from Charterhall showed the average wind speed to be 23 mph (37 Km/h), gusting to 37 mph (59.6 Km/h), which is not unsubstantial. Indeed, as Bernhard and I posed for photos outside Ravelaw House, the trees were bending in the wind. 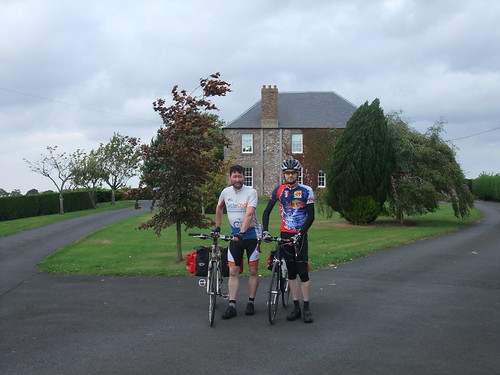 Having set off, we first went south and east, which was odd, because our destination was to the north and west, but then that is what comes of putting a geographer in charge of the navigation, I suppose. The first place we passed through was the village of Whitsome, which has very little to detain the passing cyclist, so we didn’t bother stopping. There was some vague discussion of picking up supplies for the road, bananas, snackie bars, that sort of thing, so we headed for Chirnside with the aim of finding some shops. Having reached the outskirts, a further discussion on buying supplies ensued and it was decided that we didn’t need any. So we followed the A road around the village and didn’t go in, missing out on the delights of the 12th century church and an extra climb. On the subject of climbing, Bernhard, having shown the day before that he was the master climber, was emphasising the point by wearing his Ötztaler Radmarathon finishers jersey.

Just short of Chirnsidebridge we turned off the A road and carried on along quiet little roads, seeing no other traffic. This is one of the things I like about cycling in the Scottish Borders, the number of quiet wee roads there are, but the B6355 seemed unusually quiet. We had passed traffic cones and a couple of blown over signs, but we hadn’t taken much notice, until we got to Nel Logan’s Bridge over the Preston Burn, just outside Preston. The bridge was closed for maintenance, which explained the total absence of traffic, but the workmen allowed us to cross over the bridge. However, we didn’t stop to look at the bridge itself, which is a shame, as it has a rather curious history. The bridge (which is now a Category B Listed Building) was build in 1793 with a single segmental-arch, this was later enclosed to form a gaol cell. According to local tradition, Napoleonic prisoners of war were held here while in transit to larger sites. The bridge is named after Nel Logan, she is said to have been the last person to have been imprisoned there, for the crime of sheep stealing. Apparently inside there are still metal rings in the wall to which, it is rumoured, the prisoners were chained. In the middle of the floor, directly above the burn, is a hole which is said to have been the toilet. There used to be a heavy wooden arch-shaped door, but this apparently fell apart some forty years ago. There are some pictures of the bridge on Flickr, really must stop to take a look next time.

We carried on through Preston, to cross the Whiteadder Water at Cockburn Mill Ford, which is now culverted and only a ford when the water is high. Then we followed the Mill Burn upstream to its watershed. Crossing over the watershed, we came down the dead pheasant highway, which was as heavily littered with road kill as the day before. We tore down the hill with the wind at our backs, fortunately there were no pheasants with suicidal intent throwing themselves before our wheels.

Reaching Ellemford Bridge, we crossed over the Whiteadder Water again, which was to become something of a habit as we crossed it a further four times. 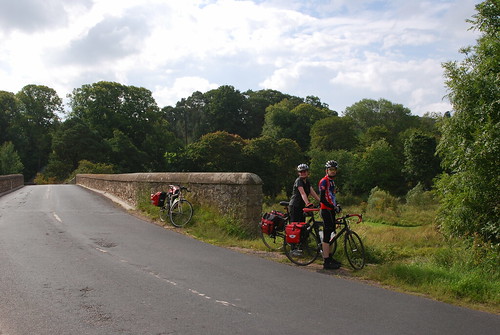 It was easy riding as we wended our way up past Cranshaws, following the Whiteadder Water up stream. I was starting to look forward to the prospect of wind assisted climbing on the Hungry Snout, but before this steep climb there is an easy slope by “The Bell”, which I sailed up this with ease. So when I came to the Hungry Snout itself I was feeling very confident. Having ridden this road before, I should have known better. The sign at the bottom says 14%, and although it looks easy on approach, it should not be underestimated, as there is a sting in the tail when you round the bend, hidden by the trees. However, confidence boosted, I decided to sprint up it. Bad idea. By the time I reached the steepest section, I was already breathing as hard as I could. I somehow managed to get past it, but as the road started to flatten off, my lungs were no longer able to supply my leg muscles with enough oxygen to keep going, and I had to stop and catch my breath. Utter madness, had I taken it slow and steady, it would had been easy. Ho Hum, but it was glorious.

Descending the north side of the Hungry Snout was fun, then we zipped alongside the Reservoir and up to the cattle grid, where we stopped for a snack and some water. Then, instead of going back the way we had come the day before, we turned off to follow the Whiteadder Water to its watershed. This is a great wee road, although the surface can be rough in places, but don’t let that put you off. Over the watershed, we decided to stop at the White Castle hill fort and take some photos, which isn’t so easy when the wind is trying to push you over. 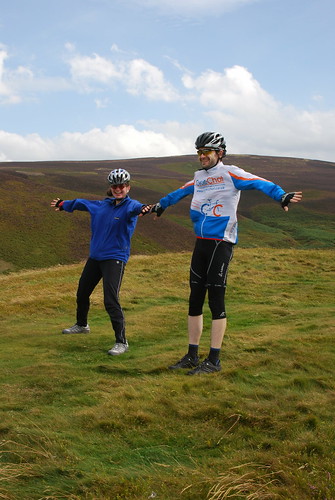 The ride from White Castle to Garvald was an absolute blast! I achieved a new record top speed, 80.63 Km/h (50.1 mph), I hardly slowed on the climb up to Nunraw, it was a real blast. After Garvald, as we rode on to Gifford, we were no longer travelling with the wind, but rather across it, which was less comfortable. As we reached Townhead farm, we met a massive combine harvester, so wide it took up the whole road. Once it had passed, we rolled down into Gifford, for lunch at the café “Love Coffee… …and Food?”. It seemed far longer that the 24 hours since we had last been there, but the welcome was just as warm.

Over lunch we discussed taking the scenic route via Humbie, but decided that, given the wind conditions, we would go back the way we had come out the day before. Back on the road, we were confronted with road works just outside Gifford, with the west bound carriageway still being resurfaced. This prompted another change of plan which involved a dogleg along a minor road we hadn’t used before and then heading into East Saltoun from the south. As we rode along, I started to make a check list of things look for to determine if you were riding in a high wind or not, so…

After passing through the Saltouns we headed for the old Pencaitland railway path and the shelter from the wind it offered. Then on to Whitecraig, where we picked up the NCN 1 back into town. We gave Bernhard the full tour, over the (not exactly cycle friendly) Brunstane Station bridge and the Innocent railway path, including the tunnel.

here is a map of our route here.