As some of you will now know, I have been building a bicycle based on the frame and forks of a Genesis Croix de Fer (2009 model) for some time now. Finally, I have reached the bit you have all been waiting for: I am now riding the thing. Before I go any further, anyone new to this, who wants to know the whole story, start here.

In any bike build project you reach the point where the bike is not quite finished, but it is ridable. At this point it is a good idea to find somewhere quiet to take it for a test ride, somewhere you don’t have to stop suddenly (just in case the brakes fail), and somewhere you can stop suddenly (just in case you need to) without being run over. So what did I do for the first ride? I rode it over to a local bike shop to check whether I had set up the brakes correctly. After a wee bit of tweaking, they declared them fit for use, actually the most useful thing they did was to true the front rotor. I am new to using disc brakes, so I don’t know if this is a normal procedure, but the fact that they had a special tool for doing it suggests that it is. Unfortunately, the mechanic who was truing the front disc, while his colleague was fiddling with the pad alignment on the rear, got bored after finishing the front. Consequently the bike stills makes a zzzing zzing noise as I ride.

Riding home again, I found that the brakes were far more positive. I have been told that disc brakes need time to bed in before they reach their full effectiveness. So, as I ride, I have been giving myself plenty of time to slow down on the approach to junctions, but now I feel more confident. Approaching a major road, I am riding on the hoods, brake a wee bit harder. As my weight moves forward, the right brake lever slips down the bar and I loose pressure on the leaver. In order to stop before crossing the oncoming traffic, I have to deploy both anchors (feet applied firmly to the deck), the important thing is that I stop. After that, I rode the rest of the way home more cautiously, hunkered down on the drops. Having gotten home, I made very sure that I tightened up the bands holding the STi levers, so this wasn’t going to happen again.

Having gotten the brakes sorted and the STi levers securely tightened, the next job on the list was to add some bar tape. I have chosen to use Fizik Microtex bar tape, not the gel stuff, just the ordinary tape. It is not as cushioned as some tapes, but it is strong and said to be relatively easy to apply. As I had never applied tape before, I wasn’t sure where to start, so I did a web search, read a few web sites and watched a few videos. Everyone made it look so simple, so I knew it wasn’t going to be. The best tip I picked up was to try wrapping the bars a few times before you remove the backing from the adhesive strip. I wasn’t helped by the fact that the 3T Bio Morphe Handlebars are ergonomic, not just round, and so far more fiddly to wrap. That is my excuse for not having the most neatly wrapped bars, I will talk about how they feel in use later.

The final thing I felt I needed to add to the bike was mudguards. This bicycle is about function not form. It is not about looking pretty, it is about transport, so mudguards are a must. I wasn’t sure which mudguards, so I took myself off to a local bike shop, in this case Bike Trax, on the basis that they stock the Genesis Croix de Fer, so should ken which guards fit. I walked in with bike and said I was looking for some mudguards. The sales assistant went off and got two sets of guards: Crud Road Racer MkII and SKS Raceblades. I was instantly drawn to the Cruds, they just look so much better. I was a wee bit sceptical that they would fit, as the general wisdom is that they are for a maximum tyre width of 25mm and I have 28mm tyres, but I was persuaded that they would. When I came to fit them, the tyre width wasn’t a problem, frame clearance was more of an issue. Crud Road Racers are designed for road bikes with minimal clearance between the tyre and the frame, but the Croix de Fer is a cyclo-cross bike with loads of clearance, which makes the setting up a wee bit fiddly, but it does work. A really nice touch. Ideally, I need to add some wee brackets to move the guards away from the frame down onto the tyre, which would make them almost invisible, I might get round to this one day. One the features I like about these mudguards is the way the bottom of the rear guard wraps around the tyre to protect the chain and running gear.

But what is it like on the road, I hear you ask. Well it is great fun! It is slightly lighter than my other bike, but not much. It feels faster, but that is more wishful thinking than stats so far, after all, it is using the same engine. Being a cyclo-cross frame, the geometry is more relaxed than a full on road racing bike, this makes for a comfortable riding position. The Shimano Ultegra drive train is really smooth, although I am still getting used to the STi gear changing. I tend to forget which gear I am in (there is no indicator on the leavers, as Shimano would like you to buy it’s Flightdeck computer), and also which lever shifts up and which down, but that will come with practice.

Contact wise, so far I am happy with the Fizik Antares saddle, although I haven’t had a long enough ride to really test this. The 3T Bio Morphe Handlebars are also really comfortable, even with the thin Fizik bar tape. I don’t find that I need any extra padding, indeed, I have found that I can comfortably ride without wearing mitts, which is something I haven’t done for years. Overall, I am really happy with the way the bike has turned out. So all that is left is to take the obligatory bicycle in the kitchen photo. 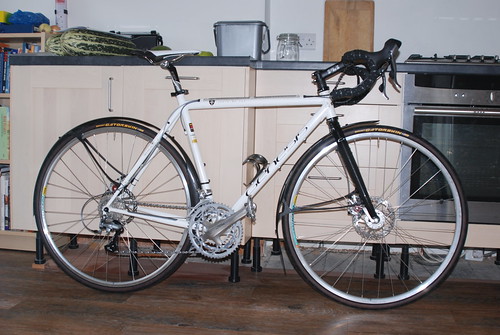 3 thoughts on “Bike build project (part 6): Finishing off and finally riding the thing!”