My idea of a Cargo Bike Club took a small step forward today, but first a wee bit of history:

Back in the autumn of 2010, Ulli and I were faced with the problem of getting a large pumpkin home from the allotment (not a problem that we have had since due to the poor summers). The solution I suggested then was to get a cargo bike, but at that time such bikes were very few and far between in Scotland, not that there are that many more now. This led me to come up with the idea of a Cargo Bike Club as a means of making cargo bikes available to the wider population (and a way of kick-starting the market for cargo bikes in Scotland).

When I first floated the idea of the Cargo Bike Club, it attracted a lot of positive comments. My initial idea was to use the City Car Club model, where the users would pay an annual fee to join the club and then have self service access to the bikes for a small hourly hire rate. There are, however, a few technical issues with security and self service access, which I have yet to overcome.

One person who thought he could over come these problems was Will Vaughan who took my idea (he did contact me and ask first) and started cargobikehire.com. However, he was planning on using a prototype technology from a small German startup called LOCK 8. I have seen the Kickstarter campaign raising funds to develop the locking system, but was sceptical about the level of security it would offer (the cable shown in the pictures is up to Solid Secure Gold level, as required by insurance companies). [Up date: I met Philipp Meyer-Scheling, the MD of Lock8 at EuroBike and am hoping to have another meeting with him in November] At the present time, it doesn’t appear he has managed to get the self service access up and running, but he does have a Bullitt available for hire in the Hereford area, so all credit to him.

The idea of the Cargo Bike Club has continued to gnaw away at me, and I have re-visited the idea a few times, but mostly I have gotten on with other projects like the Edinburgh Festival of Cycling. Where is all this rambling going, I hear you ask? Well, this year the Edinburgh Festival of Cycling Ltd has acquired an Urban Arrow cargo bike, and from today it is available to hire when not in use for company business. 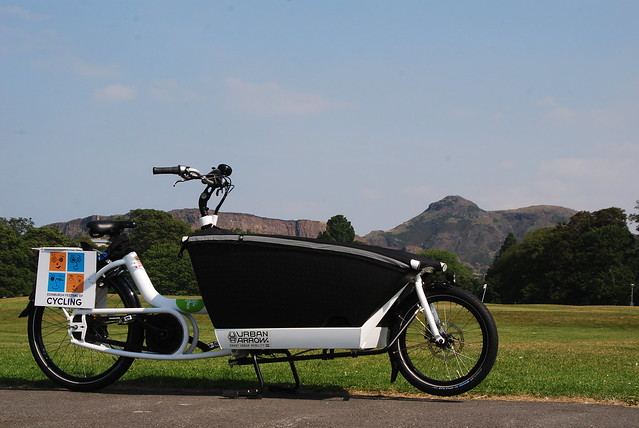 It is a small step, but it is a start, this is currently the only cargo bike available for hire in Edinburgh. Who knows, if this bike proves popular, there may yet be a Cargo Bike Club in Edinburgh. I am still working towards getting it off the ground one day.

5 thoughts on “A small step forward”

"There's a fine line between marketing and grand theft."