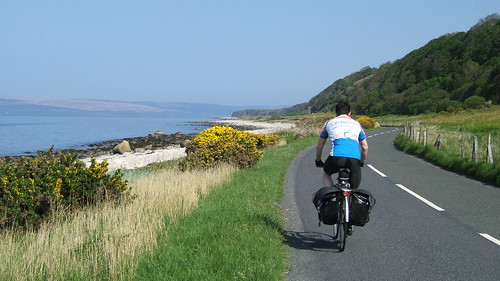 Following a good dinner and a good night’s sleep, we were ready to tackle the remaining part of our circumnavigation of Arran (see Part 1 for further details, or scroll down to “Cycle hire in Edinburgh” where the story really begins). Before starting out, we really needed carbo loading, however the B&B we stayed in was English-run and porridge wasn’t on the menu. Unfortunately it was one of those B&Bs where there is no menu, you just get what you are given, in this case a fried breakfast. No matter we thought, we will just pick up something more along the way. It was a bright clear morning, but the wind was in the North East again, so this time the cycling was not going to be as easy as the day before.

Starting out from Blackwaterfoot, things weren’t too bad, sure there is a bit of a climb going up through Torbeg to reach the giddy height of 54 m ASL (Above Sea Level), but then we dropped back down to near sea level at Tormore. Once we had crossed Machrie golf course, the road runs along a raised beach and we were in the lee of a low cliff to the east.

A digression on raised beaches, these are a particular geological feature of the Scottish coast (and can be found elsewhere in the world too). Raised beaches are caused in part by glacio-isostatic rebound and partly by sea level variation due to climate change. Glacio-isostatic rebound occurs where the accumulation of ice sheets has depressed the land, so that when the ice melts the land readjusts with time. Since the end of the last ice age, about 10,000 years ago, Scotland has been rising slowly (and southern England sinking slowly). Added to this, there have been changes in mean sea levels. At the warmest point since the last ice age, about 5,000-6,000 years BP, the global temperature was about 4°c warmer than at the present time and sea levels were higher. As the earth cooled, sea levels dropped and the sea receded from these beaches, leaving them dry land. However, with the current global warming (the earth started warming up again in the mid 19th century due to the use of fossil fuels and the emissions of greenhouse gases), sea levels have started to rise again, so one day the sea may yet reclaim at least part of these beaches. But enough of this and back to the story…

Pretty much all the way from Machrie Bay to Imachar Point the road runs along a raised beach at about 5 m ASL, and the cycling was easy. At Imachar there is a short climb up above the cliff, about 40 m ASL, before dropping down again at Whitefarland. From there to Pirnmill was easy riding again, as we were back on a raised beach, sheltered from the wind and enjoying the sunshine. As we passed through Pirnmill, I suggested stopping for an ice cream, as the tea room there does particularly nice ice cream, but it was still early and the other two didn’t want to stop. Beyond Pirnmill the road turns more to the North East and we found ourselves cycling into a headwind. So we started to take it in turns to lead the way, forming a very short echelon, with the other two tucked in behind, sheltering from the wind, a technique which cyclists call drafting. The curious thing about drafting is that it is not only the following cyclist that gains, the lead cyclist also benefits, although not as much as the follower. So two people who are drafting can use less energy than two individuals who are not drafting, to cover the same distance in the same time. This may explain how we managed to maintain a relatively high average speed despite the wind.

The road on this part of the island was even quieter than going round the south the day before, which made for pleasant cycling. I was in the lead as we approached Catacol, and saw up ahead a large area of gorse (Ulex europaeus) in full flower on the flat ground surrounding the mouth of the Abhainn Mòr, and its sweet coconut smell was carried on the wind towards me. I often wonder when I smell it, whether the first Europeans to encounter coconuts commented “hmm… these smell just like furze (the old name for gorse)”. We stopped at Catacol to take a few photos. There is a row of picturesque old fishermen’s cottages known as The Twelve Apostles that date from 1863, which are regularly photographed by passing tourists. There is also a rather dodgy bench which I made the mistake of sitting on, that photo is not going on the web. As there wasn’t a shop and it was still early, we decide to carry on to Lochranza before having lunch.

According to Bernhard, the Dictionary of Things There Aren’t Any Words for Yet – But There Ought to Be defines Lochranza as “The long unaccompanied wail in the middle of a Scottish folk song where the pipers nip round the corner for a couple of drinks.” Yep, I’ve been at ceilidhs like that as well.

Arriving in Lochranza it was time for more photos, this time of the castle, which is a bog standard L shaped tower house design so beloved of the Scottish nobility. It is situated in a commanding position on a spit of shingle sticking into the Loch and is also very photogenic. Or rather it will be, when Historic Scotland finish the work to stabilise the walls. Although most of the scaffolding has now gone from the outer walls, the builders hut and port-a-loo remain, while work continues on the inner walls. Photos taken, it was time to think of finding lunch. My first thought on a place for lunch was to try the Distillery visitor centre, however, a coach load of pensioners beat us to it. So we tried our luck at the Pavilion tea rooms by the golf course, where we procured some home-made soup and well filled baked potatoes which fortified us for the coming ride.

On leaving Lochranza, we headed up Glen Chalmadale and the hill which I had been thinking about all day. I was remembering my first visit to Arran and the speed at which I descended from the bealach, at 199 m, to sea level at Lochranza. The prospect of climbing in the opposite direction into the wind did not entirely appeal to me. Fortunately the glen is sheltered by Fionn Bhealach (444 m) to the north which kept off most of the wind. Even so, I soon gave up any idea of keeping pace with Bernhard on this climb, and I lost contact with Ulli before I reached half way. By now I should know better than to expect to keep up with Tyroleans when going up any form of hill. By two thirds of the way up I ran out of energy and had to stop. I was dammed if I was going to walk, so just stood for a while and took a rest. Way up ahead Ulli noticed I had stopped, so she stopped and waited for me. Having caught my breath, I started off again and joined Ulli. We rode together to the top where Bernhard was now waiting with a camera, and as we approached I punched the air to show victory over the hill. I then decided this wasn’t enough and tried doing so with both hands, attempting to convey the impression that I was riding down the Champs-Elysées with the pack following at a distance. Instead of which, as I was travelling at such a low speed, I had a massive wobble with the bike leaning over at a 45° angle. Desperately trying to unclip before I went over completely, I somehow managed to pull myself upright again, seize the handle bars and stabilise the bike, narrowly avoiding a very embarrassing clipless moment.

Having passed over the bealach, we descended from 199 m back to near sea level at Sannox. Still tired from the climb, I didn’t pedal much on the way down and mostly freewheeled, hitting a top speed of only 54.4 Km/h (33.8 mph). We did briefly consider turning off to visit North Sannox Bay, but decided that we had had enough climbing for one day. We carried on through Sannox to Corrie ,where we stopped for some more photos at the small quayside. South of Corrie at Rubha Salach we stopped and pulled the bikes off the road and went to photograph some seals which were hauled out on rocks at the edge of the water. That is one of the great things about cycle touring, you have plenty of time to look around and if you see something interesting it is easy to pull over and take a look. Passing car drivers slowed down to try and see what we were looking at, but soon found that there was nowhere for them to park.

Finally we found ourselves back in Brodick, where we made a bee line for Wooley’s of Arran, to pick up a pick up a few well deserved snacks before catching the ferry back to the main land.

Here are the stats for anyone who is interested:

"Speech is conveniently located midway between thought and action, where it often substitutes for both."