Today is the annual World Day of Remembrance for Road Traffic Victims. According to the World Health Organisation (WHO) there are 1.24 million road traffic deaths every year and Road Traffic Accidents (RTA) are the number one cause of death among those aged 15-29 years. However, it is the young and the elderly who are most vulnerable on our roads.

Here in Scotland I recently discovered that there is a framework for road safety in Scotland, which was drawn up in 2009. As part of this framework there is a 0% casualty target for the year 2020. Sadly in Scotland over the last four years there has been a rise in the number of vulnerable road users killed or seriously injured, which suggests that the strategy currently in place is failing badly and needs to be revised.

Here are a few headlines from the last few days. This is not an extensive list, just a short snapshot:

Just in case you didn’t know today is World Day of Remembrance for Road Traffic Victims 2012. It is commemorated on the third Sunday of November each year – to remember the many millions killed and injured on the world’s roads, together with their families and many others also affected, as well as reflect on the tremendous burden and cost of this daily continuing disaster.

Why do we need such a day? Well death on the roads is now so common it doesn’t always get reported in the press and it is not taken seriously in our courts (a president set after the death of Bridget Driscoll in 1896). It has been estimated that over 1% of people alive today in England and Wales have lost a close family member in a fatal road traffic crash, since 1971. This includes 131,399 parents who had lost a child and 107,384 offspring who had lost a parent. The authors of the paper these figures came from concluded that “this may imply a greater public health burden of road traffic crashes than previously estimated”. Yet out elected leaders still don’t want to take it seriously. They could clamp down on driving offences, or take practical steps to make our roads safer, such as lowing and enforcing speed limits, and providing safer infrastructure. It is time we called an end to this carnage, we have to stop drivers getting away with murder, manslaughter, unlawful killing, or death by misadventure, these deaths are not mere “accidents”, that all tragedies.

Today saw the launch of the “Decade of Action for Road Safety 2011-2020“. Never one to miss a photo opportunity, David Cameron had agreed to help launch the UN’s Decade of Action for Road Safety and managed to get Britain’s two Formula One racing drivers, Lewis Hamilton and Jenson Button, to join him. We also had the announcement from Transport Secretary Philip Hammond of the introduction of On-the-spot fines planned for careless driving, as part of the Strategic Framework for Road Safety. All of this sounds like the Government is keen to do something about reducing the damage done. The Framework clearly says that “Road deaths and injuries are a tragedy for all those affected. And as well as the terrible human cost, they impose a heavy economic burden.” This sounds all very well, but let’s just have a closer look:

First, why were two racing drivers at a photo call to promote “road safety”? Button has a number of convictions for speeding and Hamilton has been charged with speeding in the UK and reckless driving in Australia. Not good role models in a country where 40% of young drivers think there is nothing wrong with breaking the 30mph limit by 10mph or more.

Secondly, there is a major problem with the Strategic Framework for Road Safety in that its central theme is absolving the majority of those drivers from their responsibility for most of the danger on the roads. It does this by diverting attention onto the very worst drivers, but has no serious intention of dealing with these people either!

The new strategy says that, instead of drivers being taken to court for driving offences, police can fine careless drivers. Offenders will get a fine of at least £80 and three points on their licence. This is not about making the roads safer, it is about cutting costs, by avoiding taking people through the court system. It isn’t even intended as a deterrent. In a country where you can be fined £1,000 for dropping litter, why is it proposed that an activity which puts lives at risk should only attract a fine of £80? Why is there such a reluctance to deal with the issue of danger on our roads?

We all have the right to use the roads, on foot, riding a bicycle or riding a horse, there is no right to drive. Driving on the public road is a privilege only permitted by licence, this licence is granted under trust after passing a driving test. The driving test is there to ensure that drivers can drive to a safe minimum standard. It is well known that the majority of collisions on our roads are caused by driver error. This is why there needs to be a clear hierarchy of liability, with those capable of causing the greatest harm taking a greater level of responsibility.

However, we have somehow allowed the situation to arise where the holding of a driving licence is increasingly being seen as a sacred right. There are hundreds of drivers on the roads with 12 penalty points. All too often drivers who have broken the law (and the trust placed in them when they received their driving licence) avoid a driving ban, by claiming such a ban would inconvenience them. The courts will not accept such a defence for any other form of criminal activity, car crashes have long been a greater killer of the young than violent crime, so why such a softly, softly approach to driving?

In this country you can legally hold a shotgun under licence, however if you were to accidentally discharge it over the heads of people in a public place, you would expect to lose your licence. No court would accept the defence that it was OK because no one was hurt, or that it was caused by a momentary lapse of concentration, or that you had been distracted by a phone call on your mobile, or that such a ban would cause you inconvenience. Before anyone complains that this is not a fair comparison, being hit by a motor vehicle is just as damaging as being shot, the level of kinetic energy is about the same. It doesn’t make a difference to the person who is killed or seriously injured, whether they were shot or hit with a motor vehicle, they are still dead or maimed either way. Drivers should never forget, cars can kill!

We have a situation where most people think that they are better than average drivers, but at the same time 40% of drivers feel that they would fail a driving test if they had to take it again tomorrow. Until we have a change of attitude, drivers will undoubtedly continue to blame everyone else on the roads but themselves.

Addendum:
Sadly the Secretary of State for Justice, Kenneth Clarke QC, MP, seems to be incapable of understanding the concept of dangerous driving. Apparently “ordinary dangerous driving” isn’t a serious problem, but then this is a man who doesn’t think all rapes are a crime. All rape is rape and all dangerous driving is dangerous, both destroy lives. I just wish Ken Clarke would stick to playing records on the radio and leave the serious stuff to people who understand the real world. My thanks to Joe Dunckley for the tip off.

More news has come to light, this time from Scotland, where at least 387 drivers have more than 12 points on their licence: 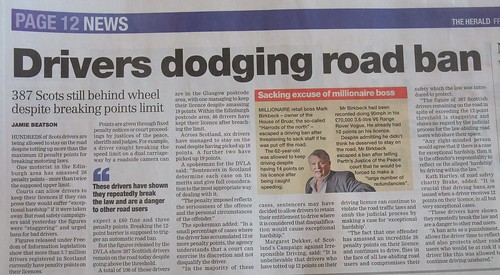 Let us all take a moments silence to remember Mrs Bridget Driscoll of Croydon who died 113 years ago today, in 1896, the first pedestrian to be knocked down and killed by a motor vehicle on a British road. She apparently froze in panic at seeing the oncoming vehicle, a witnesses said that the car, driven by Arthur Edsel, was travelling at a “reckless pace”. Apparently the car was being driven at 4 mph (although the car had a maximum speed was 8 miles per hour, the diver claimed it had been limited deliberately to 4 miles per hour) so why did the driver not stop or drive round her? Since then hundreds of thousands more have died on our roads (and that is undoubtedly an under estimate), which begs the questions: why do we continue to let drivers get away with it, and when will this carnage ever end?

"Nature has a way of compensating for weaknesses,
which is why stupid people have big mouths."