This morning, sitting at breakfast looking out at a dreich and misty Arthur’s Seat, I started scanning the trees nearby, just as something to do. Over the last few years we have seen a wide range of birds around this area, Ulli, seeing me looking commented that we haven’t seen anything unusual recently. Just after she said it I noticed something odd in the top of one of the limes (Tilia Sp.), so I dug out a pair of bins and took a closer look. At first we were both puzzled and took some notes and after a wee bit of searching around we able to identify it as a Great Grey Shrike (Lanius excubitor), not your common or garden urban bird, sadly it is too dull a day for photos.

A couple of hours later there were a number of Long-tailed tits (Aegithalos caudatus) moving though and I started to wonder if I had made a mistake about the Shrike, but am not so sure, it looked bigger than a tit mouse. 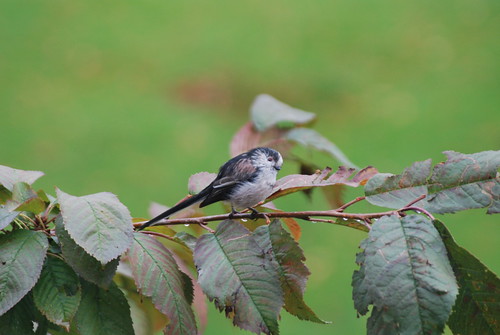 Either way this is definitely a Long-tailed tit (Aegithalos caudatus).

An Edinburgh lawyer, Anthony Robson, has started a new website listing wildlife sightings in Edinburgh. The web site came about because he had taken a load of wildlife photos over the last year or so, and couldn’t find an on-line ‘this is the wildlife of Edinburgh’ resource. So he decided create one and then get people to send in photos and sightings of their own to create a map of wildlife in the city. Great idea Anth, I hope it will be a great success.

The web site EdinburghWildlife.com can be found here.

I didn’t sleep well last night, no particular reason it just happens sometimes, one consequence of this was that I was awake when the first bird started to sing. At 03:27 a robin (Erithacus rubecula) started singing followed by another robin at 03:34, the first blackbird (Turdus merula) to sing a little after 04:00 (did quite catch the time). That last one I identified was a chaffinch (Fringilla coelebs) at 04:57, after that I drifted off to sleep until my alarm went off just before 07:00. The thing that strikes me most is that the chaffinch was the closes one to the sun rise at 04:53, it interesting that they started so early, by the time my alarm went off most of the singing had stopped. Could it be that they start early to avoid competing with the noise of the rush hour traffic?

Just recently I have been watching, with some amusement, a battle between a pair of property developers and a number of prospective but unwanted tenants. This highly desirable city centre property is a renovation of an older property, but which has taken a bit of a battering in recent time. I am keen to see the property developers succeed in their endeavours as I think they will be a good influence on the neighbourhood.

At this point I should, perhaps, point out that the property developers in question are a pair of crows (Corvus corone corone). The property is a nest high in a sycamore (Acer pseudoplatanus) which they built last year. In previous years they have nested in Elm (Ulmus procera yes we do still have elms in Edinburgh) further away from my view point at the kitchen window, so this was an improvement as it gives me a better view. Fast forward to this year, the crows have recently set about rebuilding their nest after the buffeting of the winter storms. The fun starts when they are away from the nest, as there have been visits from a number of prospective squatters. So far there have been a pair of jackdaws (Corvus monedula) who turned up the other day, had a look around then went away again. They came back for another look today and were a wee bit surprised to find a woodpigeon (Columba palumbus) trying the nest out for size. The jackdaws weren’t sure what to do and circled around for a bit, hopping closer branch by branch. At first the woody ignored them, but as they got closer it puffed out its feathers and tried to be scary. At this point the jackdaws decided to make strategic retreat. This left the woody sitting looking a bit smug at having stared down the jackdaws, when it suddenly realised why the jackdaws had made such a hasty retreat. One of the crows had just returned and was not best pleased to find an interloper in the nest. The woody dived out of the nest, closely followed by the crow which took a few feathers off the woody’s neck as a reminder not to come back.

Later, while the crows were away again, a grey squirrel (Sciurus carolinensis) turned up to scope out the nest as a potential drey. At least that is why I think it was taking an interest, as it is a wee bit early in the year for nest robbing. Last year a grey squirrel did attempt to rob the crows’ eggs, but was seen off in no uncertain terms. One of the crows chased the squirrel out of the tree and over a wall. The squirrel then climbed another tree, circling round the trunk trying to hide, but the crow was wise to that move and continued the attack, forcing the squirrel out of the tree and back onto open ground. It then pursued it over another wall out on to a busy road, finally leaving the squirrel to play with the traffic. At this point, the crow ceased the attack and returned to the nest.

The reason I like having the crows nesting nearby is not just that they know how to keep the thieving squirrels in order. It is because they are very good at keeping other unwanted visitors away as well, namely gulls. In recent years there has been an increase in the number of gulls breading in the city, mainly Herring (Larus argentatus) and Lesser Black-backed (L. fuscus) gulls, neither of these species make good neighbours. Fortunately, the crows won’t tolerate these scavenging pests in their territory, so we are able to sleep soundly at night, free of the raucous cry of the gulls. There are gulls thinking of nesting somewhere nearby (but not as I say on mine or the neighbouring tenement), as I saw as couple trying to mob a buzzard (Buteo buteo) the other day. The buzzard did its best to ignore them and continued climbing on a thermal until it could head off over Holyrood Park in search of prey.

Some years ago I wrote a post on the need to reduce the population of deer in Scotland, recently concern about Scottish deer population has come back into the news. Due to the amount of snow we have this winter, a larger than usual number of deer are starving. As anyone who walks in the Scottish hills will know, it normal to find a few dead deer which haven’t survived the winter each year.

So what is the scale of the problem? Well, figures vary, but there are estimated to be between 500,000 – 750,000 red deer (Cervus elaphus) alone in Scotland, in addition there are also more than 400,000 roe deer (Capreolus capreolus) and about 40,000 sika deer (Cervus nippon). To put that in perspective there are about 500,000 in North America. Note the difference, Scotland is a small country whereas North America is a medium size continent, but the numbers of just red deer in Scotland and all deer species in North America are about the same (remember these numbers are just estimates).

There have been suggestions from some quarters that additional feed be put out for deer to help them get through the winter, but the simple fact is the number of deer in Scotland is way greater that carrying capacity of the land area available to them. For the good of the deer population as a whole there needs to be a longer cull this year, and we can all do our bit by eating more (or at least some) venison.