Our original plan had been to ride all the way around the Bodensee (or Loch Constance as we took to calling it). However, time and circumstances conspired against us and we end up with half a day for our ride, so inevitably we weren’t going to get all the way around. For me this made no difference, as it was a ride to be enjoyed, it wasn’t a training ride, it wasn’t about the distance, it was about enjoying riding through three countries in a day.

Riding a bicycle on the mainland of Europe is different to riding in the UK, it is not that you are on the wrong side of the road. No, the difference is that you are doing something completely normal, there is space provided for people to ride bicycles as a normal form of transport. We set off from Lochau along the loch shore, which is a popular place to promenade, but instead of there being one mixed use path the way there would be in Britain (on which cyclists are barely tolerated), here there are separate cycling and walking paths. 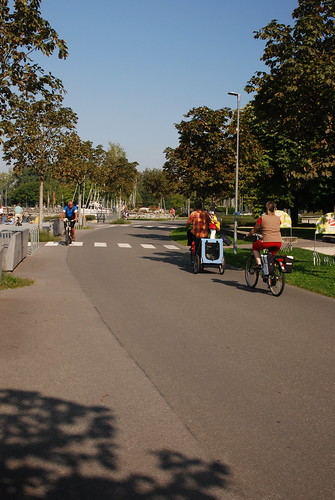 In some places there were footways on either side of the path, with zebra crossings to show that pedestrians have the right to cross. People of all types use bicycles as a way of getting about, it is completely normal and it shows. This means that you have plenty of time to look around and see, you know, the every day sort of things, like oh look there is a floating opera stage, or is that a Zeppelin flying past. Well these are everyday sights when you are living next to the Obersee (the upper loch) or even if you are just a visitor. 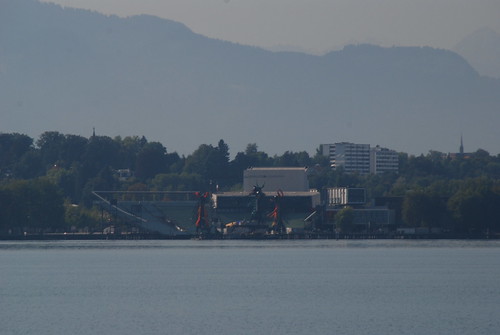 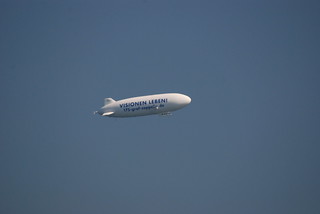 The sight of the distant opera stage intrigued me, so we once we had ridden round to Bregenz, we turned off the path and made a detour of all of 200m to go and take a closer look. The Seebühne (or floating stage) is there for the Bregenzer Festspiele (Bregenz Festival), an arts festival held every July and August. The stage sets changes every couple of years, currently it is set up for Mozart’s Magic Flute. Back in 2008 when they were staging Puccini’s Tosca, scenes for the Bond movie Quantum of Solace where filmed there. As there are no performances at this time of year, people are free to wander in and look about as they please. 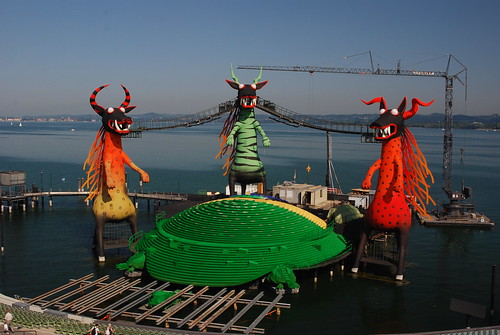 Photos taken, it was time to get back to Bodensee-Radweg, which gave me the opportunity to observe how they do things differently here. As this is a particularly busy section of the route, cycles and pedestrians are clearly separated, only where traffic is light are they mixed. This takes away the sort of conflict that occurs in the UK, where pedestrians resent there being people riding bicycles in motor traffic free areas. In Switzerland there were additional signs for inline skaters, mixing them with cyclists or pedestrians according to surface. However, there were no such instructions for users of skateboards or kick scooters, presumably they are free to decide which group to move with. It is notable that, on the Continent, inline skates, skateboards and kick scooters are all regarded as legitimate means of active transport rather than merely toys, but then the Continentals are more grown up about these things that the infantilised British. 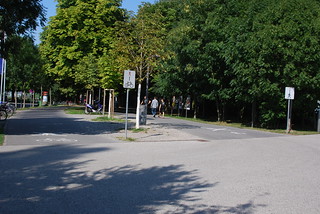 Beyond Bregenz we approached the Rhine delta, the amount of sediment carried into the loch by the river Rhine is remarkable and can clearly be seen from above (i.e. from view points on the surrounding hills and mountains). However, when you come to cross the river it rather disappointing, as it is heavily canalised and looks just like a wide ditch. Much of the farm land around is reclaimed from the loch and therefore below the level of the loch.

As we rode along we were not alone, even though it was a weekday outwith the main holiday period there were plenty of other people about, some just going from A to B, some taking leisure trips. This gave me the opportunity to observe Continental cyclists on their home ground, most were wearing just ordinary cloths, there were a few in Lycra out for training rides. I only saw two riders with Hi-viz jackets, but they were speaking with strong English accents and not locals. Helmets were few, mostly worn by the serious cyclists out on training rides, or tourists who had rented all the gear (easy to spot by the identical sets of bikes and helmets). Also notable was that children weren’t wearing helmets when riding bikes, here cycling is normal and not something to be feared. 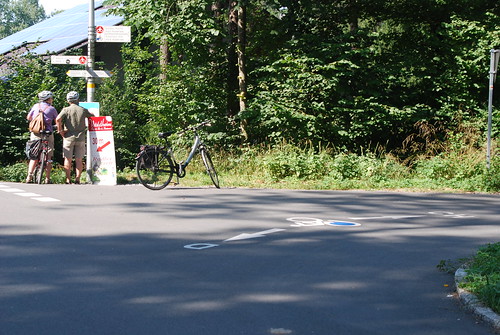 Way finding was easy with plenty of signage to show you where the paths go to, also local businesses adding their own to attract passing trade. Stopping for lunch, it was clear that cycling has quite an impact on the local economy, with generous cycle parking available. Following lunch we headed for the Swiss border. This was rather fun, instead of going through the customs post with the motor traffic, the cycle path crosses the road in front of the customs post then crosses the Alter Rhein (the Old Rhine) and therefore the Swiss/Austrian border on a small wooden bridge. 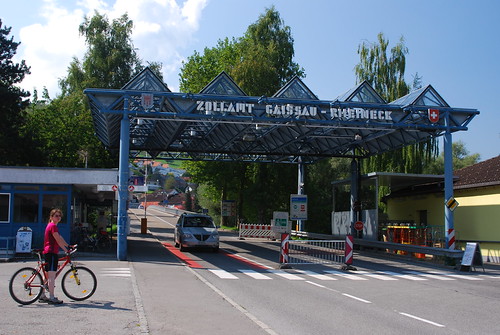 The first thing that tells you that you have just crossed an international border is that the direction signs change colours. Not far beyond the border, the cycle route skirts round a small airfield, whose main purpose seems to be to provide air taxi services to Vienna and the Swiss cities, for the opera fans going to the Bregenzer Festspiele.

At Rohrschach we came across the MV Sonnenkönigin (Sun Queen), estimated to have cost some €13m to build, she is the largest and most expensive vessel on the Bodensee. The Sonnenkönigin is an extraordinary looking vessel and with a daily charter rate of around €12,000 (just of the vessel and four man crew) she is the ultimate gin palace. Conservative opponents of the project don’t like the modern design, complaining that it looks like a gigantic shiny iron. We hadn’t expected to see her along side in Rohrschach, as her home port is Bregenz. 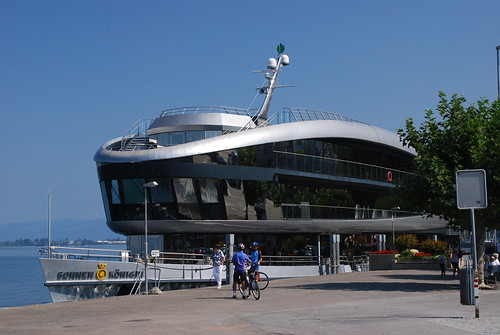 It was in Rohrschach that I almost landed a SF150 fine for cycling in a pedestrianised area, the Swiss are very keen on minor rules and equally keen on enforcing fines if you breach them. It was also in Rohrschach that we started to ride on the road with traffic for the first time. The interesting thing about this was that the speed limit was 30 Km/h (18 mph) and the riding was very much more relaxed that on an equally busy road in the UK. Before long we were directed to an offroad route once again, and the Bodensee-Radweg carried on as a mix of offroad paths and quiet roads. It was notable that on the few occasions where the Radweg was on a busier road, that the speed limit was not above 30 Km/h.

We arrived at the outskirts of Romanshorn just in time to see the ferry setting off for Friedrichshafen. We had decided in advance that this was a sightseeing ride and we weren’t going to have time to go all the way around Bodensee, this was the ferry route we were going to use. Seeing the ferry heading off, we knew that we had an hour for a bit of sightseeing. During the 45 minute ferry crossing of the third largest freshwater body in Europe, we had a chance to do a wee bit of yacht spotting. When the Swiss first entered the America’s Cup to challenge for the Auld Mug, there were a lot of voices asking what do the Swiss know about sailing. The Swiss’ answered this by winning said Auld Mug. Looking at these yachts drifting along in light airs, you start to realise what skilled sailors they are, after all anyone can go fast in a fresh breeze, but to make the most of light airs requires real skills. 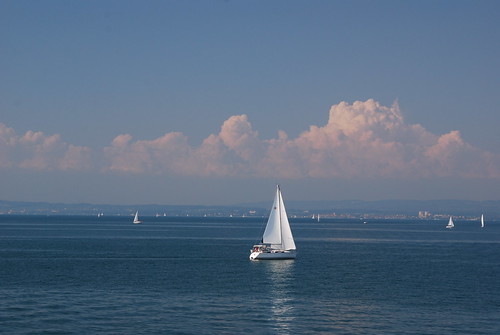 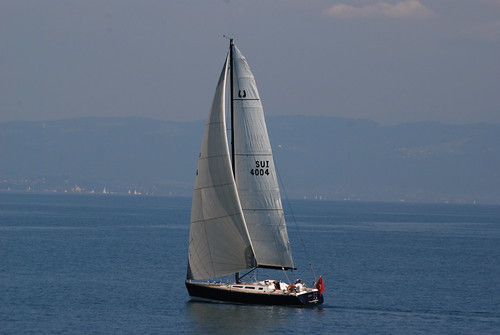 Arriving on the German side of the pond, we rolled off the ferry in Friedrichshafen and left the motorists to go through the customs post, while pedestrians and cyclists dispersed into the town. I had hoped to meet a twitter friend here, but as it was a week day she was busy elsewhere. We drifted into town looking for coffee and cake, and found a café just across from the Zeppelin Museum. We decided to give the museum a miss as we had agreed to be back in time to go out for dinner in Bregenz.

Finding our way back onto the Bodensee Radwag was easy, just go back to the port and look for the signs. Of course we were now in the third country of the day, so the colour and style of the signs was a wee bit different but that wasn’t really a problem. Riding through Germany we came across more unmetalled off road paths than we had experienced earlier in the day, however, they had a smoother surface than some roads back home in Edinburgh, and way better than most similar Sustrans paths I have come across, so this wasn’t a problem on a road bike. 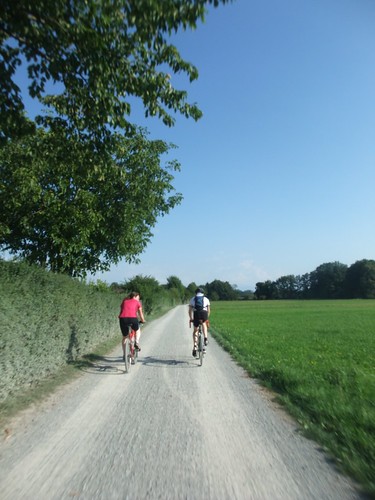 Another thing which was notable in residential areas were the 20 Km/h speed limits. Coming from somewhere where 20 mph speed limits, that is 12 mph, are still a controversial idea, this was a real eye opener. It was great riding down these roads, absolutely no hassle. Why can’t Scotland have roads like these? As we were keen to get back to Bregenz, we didn’t have a lot of time to stop and take photos or to visit the island of Lindau (but we did visit Lindau a couple of days later by bicycle). 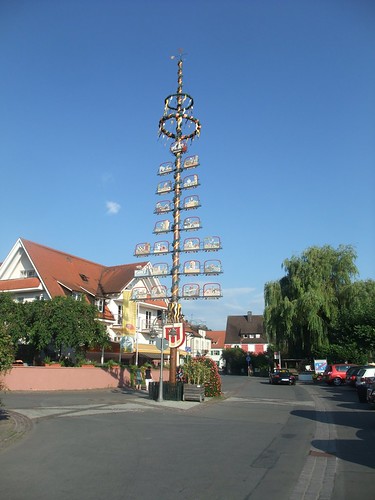 One thought on “A short ride around an inland sea”

BikeAbility offered free to 3,000 adults from next month https://cyclingindustry.news/bikeability-offered-free-to-3000-adults-from-next-month/

Why does anyone need to fly from Teesside to London? When you factor in all the airport security train will be quicker. Planet is burning and your flying unnecessarily https://twitter.com/DehennaDavison/status/1280018162575122434