Today was one of those (supposedly) rare occasions, a sunny bank holiday. By way of celebration we decided to make uses of our Historic Scotland membership and visit one of their properties. One of the great things about living in Edinburgh is that there is so much to do within easy pedalling range, for today’s wee outing we chose Seton Collegiate Church, which we had not visited before.

Rather than join the tin box bampots, who seem to love sitting (fuming) in long stationary lines of traffic, we chose to follow much of the newly opened John Muir Way, mostly along off road paths, listening to the bird song. On reaching Musselburgh, we were please to find that the Electric Bridge was open (it being a race day) ,so we didn’t have the faff of negotiating the barriers at either end of the footbridge. For those confused by this statement, maybe I should give a brief explanation: the Electric Bridge was built in the 1960’s a few hundred metres north of the “New Bridge” built in 1806 (to replace the old bridge built by the Romans on their short holiday in Scotland, c. AD 71 to AD 213). The Electric Bridge was built was to allow transport of the turbines to Cockenzie power station. Having used it once and installed the turbines the Central Electricity Generation Board (CEGB) then offered the bridge to the Town Council for a nominal sum, but the offer was declined. As a result, gates were installed and the bridge is only opened on race days to allow access to the local racecourse. However, with the recent closure of Cockenzie power station (in March 2013), there is uncertainty about the future of the Electric Bridge.

The River Esk safely crossed, we headed down stream to the confluence of the Esk and the Forth, where we paused to look back to Edinburgh and take a few photos (note today I only had my phone with me and not the usual SLR).

Had I had the SLR with me, I could have zoomed into the National Disgrace on Carlton Hill which was clearly visible. But I hadn’t, so we carried on around the coast past the former ash lagoons, now grassed over, to Prestonpans where we rejoined the road. From Prestonpans through Cockenzie to Port Seton, this was the least pleasant part of the ride, as you have to ride along a busy main road engineered to generate conflict. However, today the majority of motorists were tolerant (I have had bad experiences here in the past). Having survived this, we pulled off the road to look at the map and were passed by a smiling, waving Chris Oliver, AKA the Cycling Surgeon. The first time I met Chris we were viewing an x-ray of my clavicle, but that is another story.

The map consulted, we knew that just before the caravan park there is a wee path running up through the woods to the Seton Collegiate Church. We were greeted by Linda (?) of Historic Scotland who was very friendly and told us to leave our bikes along side her wee hut/office, as there is no cycle parking provided. She then gave us a brief history of the site and suggested the best way to view it, basically go left to the remains of the of priests’ accommodation, then peek over the gate at Seton House Castle (you are not allowed to go in, but peeking over the gate is free), and then enter the church through the west door. History wise, the original church was built in 1242 to serve the parishioners of Seton. Over time it was extended and adapted, it also became the private place of worship and burial vault of the Seton family. In 1470 the 1st Lord Seton introduced a college of priests, whose primary role was to pray for the souls of their benefactor, his wife, and his family. Evidently the Seton family had a lot of sins to atone for, as the “college” consisted of a provost, six priests, a clerk and two choir boys.

Over the years the church suffered damage during the various troubled periods of Scottish history, for instance during the Rough Wooing by the English army under the Earl of Hertford. They looted and stripped the vestments, communion vessels and stole the bells and organ, before setting fire to the timber work. Lady Janet, widow of the 3rd Lord Seton, did her best to repair the damage, demolishing the earlier chapel built by Lady Katherine St Clair (to house the tomb of her late husband, Sir John Seton) and building the present transepts and bell tower. A bell, cast in Holland in 1577, was installed, but the steeple was never completed. The church was further damaged around 1668 during the Scottish Reformation, with a number of the carvings being defaced by a mob of zealous Covenanters. Also at this time its role as a Collegiate Church came to an end, and for a short time it served as the parish church for Seton, until Seton was joined with the parish of Tranent and therefore was no longer needed.

The church finally left the control of the Seton family after the Jacobite Rising of 1715. The Setons were supporters of the Old Pretender (the self-styled James the 3rd and 8th), who caught a cold (or was it man flu) after the Battle of Sheriffmuir and beetled off back to France, leaving it to his son, the Young Pretender to carry on the family tradition of romantic (or romanticised) failed rebellions. Anyway, I digress, back to the story, the kirk was desecrated, this time by the Lothian Militia in search of “hidden treasure”. Following this, the estates of the Setons passed to the Earls of Wemyss, who partially restored the kirk and used it as a burial place of deceased members of their family, until 1946 when they gave it to the Scottish people (probably in lieu of death duties). Enough writing, time for a few photos: 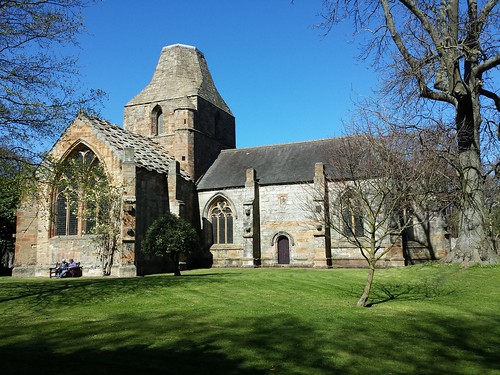 The wee hoose next door 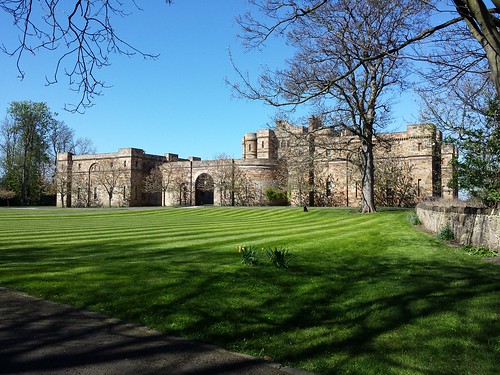 Some of the Carvings 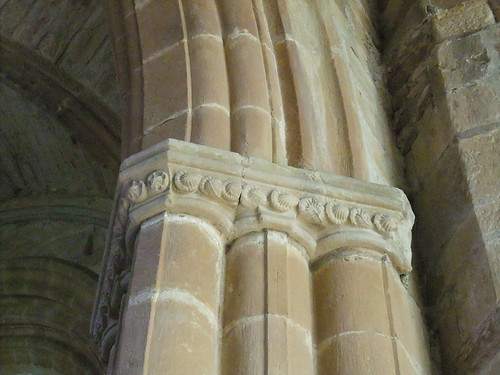 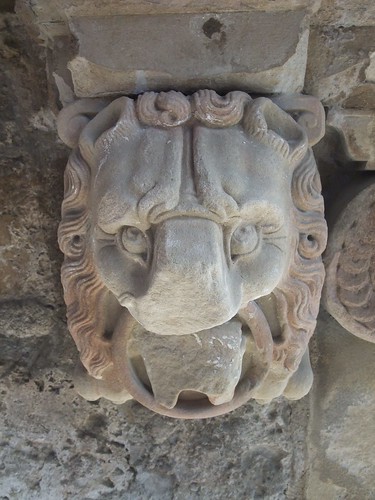 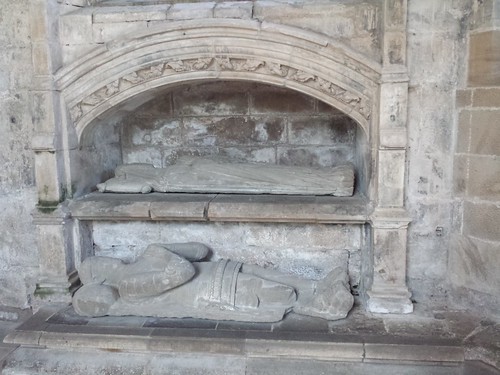 And a final carving, this one of Lady Janet Seton. If you are wondering about the colours, it is due to the sun coming through the stain glass windows. 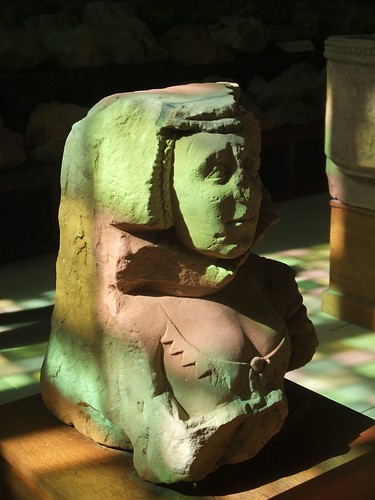 The bell. The kirk’s original bell was stolen along with the organ by the English Army in the 1544. This bell was cast for the 5th Lord Seton in 1577 by the Dutch. 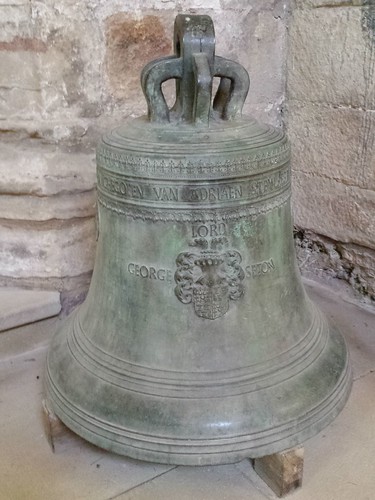 There were an number of Peacock butterflies (Aglais io) flying about the place, and this one dead on the floor 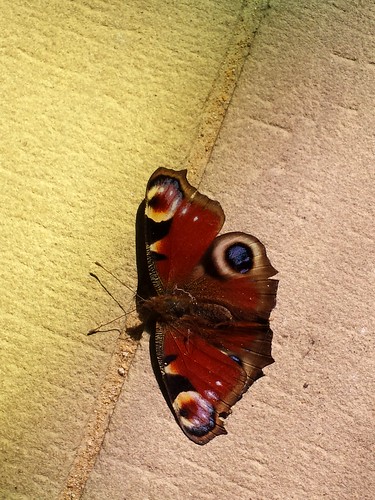 After an enjoyable hour or so wandering about the place, we decided it was time to head in to Longniddry to find a spot of lunch. Ulli suggested that we should go to the Summer House which has a wee café. The building was gifted to the village of Longniddry as a Reading Room in 1890 by the Countess of Wemyss and March. Its other claim to fame is that the Scottish Women’s Rural Institute held its first meeting there in 1917. There is a seating area outside where it would have been very pleasant to sit in the sun and eat, if it hadn’t been for the traffic noise which blights the village.

We returned to Edinburgh by much the same way as we had come. 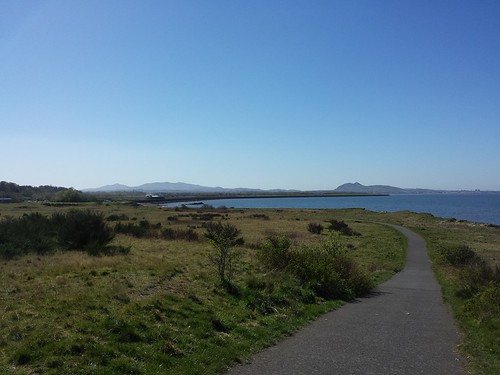