It is often said that a cycling culture, with riding a bicycle as transport, is only common in flat places. However, on my regular trips to the Alps I am always struck by just how many cyclists you see on the streets. So on my most recent trip I tried to take a few photos to show a wee bit of Alpine Cycle Chic. My first opportunity came on a couple of trips into Innsbruck, but I wasn’t allowed to go on a full-on cycle chic photo safari, just grab the odd photo.

So to start with, a few ordinary Innsbruck cyclists: 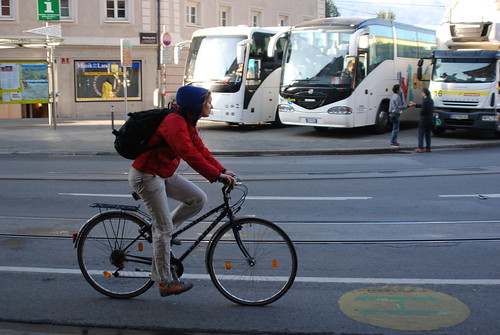 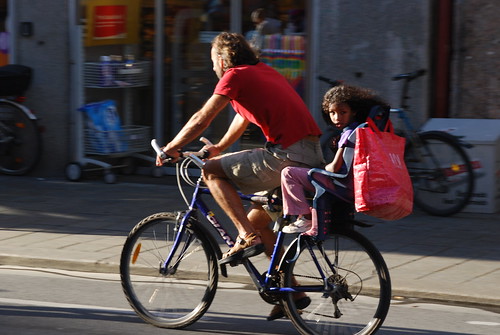 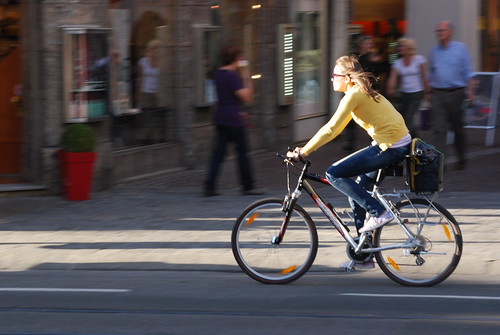 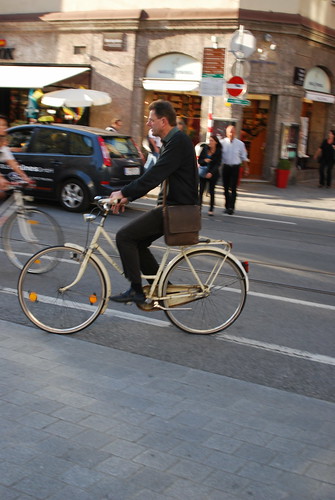 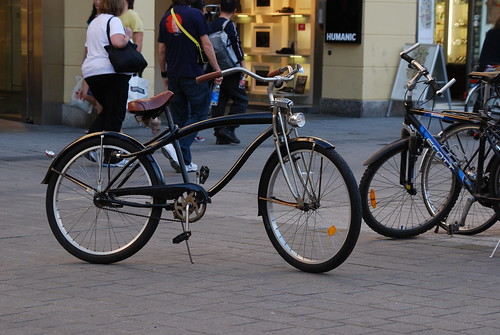 As you can see, Innsbruck has a healthy cycling culture, sadly I wasn’t quick enough to get a picture of the Christiania cargo trike in Maria Theresien Strasse. Interestingly, there was a recent attempt by the city council to ban bicycle parking in the pedestrianised part of Maria Theresien Straße, but this was rejected after complaints from the owners of shops and cafès along the street who worried that this would have a negative impact of trade. Spend a while sitting at a pavement cafè and you will soon see why, getting about by bicycle is very popular.

Given the levels of congestion of motor traffic in Innsbruck, it is no surprise that cycling is so popular. This is despite Innsbruck having other forms of traffic which UK based cycle campaigners would tell you are bad for cycling, such as trams, bendy buses and heavy lorries (there is a large amount of building work at the present time), etc. It helps that there are wide cycle paths along either side of the Inn which give access to the centre of the city. There is also an extensive network of cycle lanes, here are some pictures: 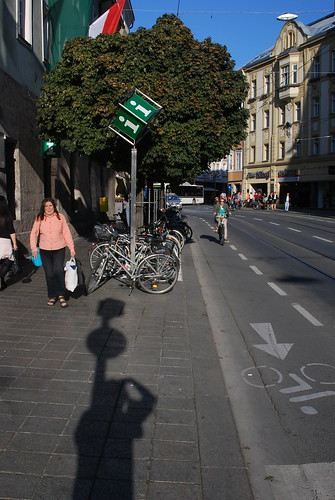 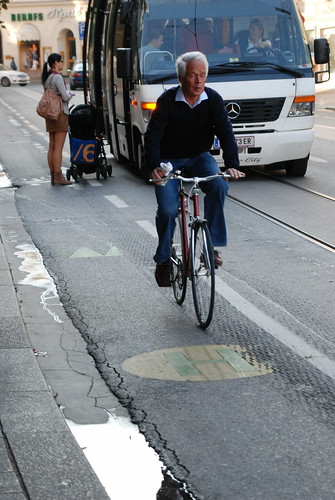 Note the the bus stop (Haltestelle) marked with a H, and that the buses stop to the left (outside) of the cycle lane. In the UK this would be seen as potential conflict point, but here the cyclists either stop or ride slowly around passengers getting on and off the buses. 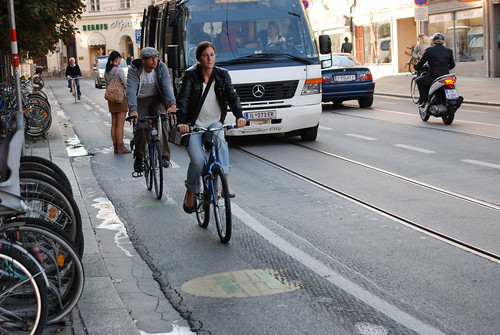 While on the subject of cycle lanes, at traffic light controlled junctions there are not only advanced stop lines for cyclists, but separate lights as well, which allow the cyclists to move off 30 seconds before the motor traffic. 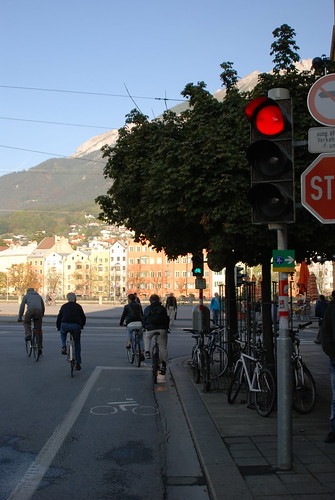 As you will have seen from the photos above, cycle parking along the streets is plentiful, as is residential cycle parking, with apartment blocks all having some form of covered cycle parking. The newer ones often have secure cycle parking built in. Cycle parking is also provided at transport interchanges, such as this bus/tram interchange. 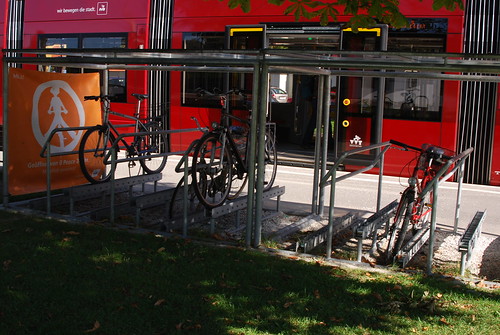 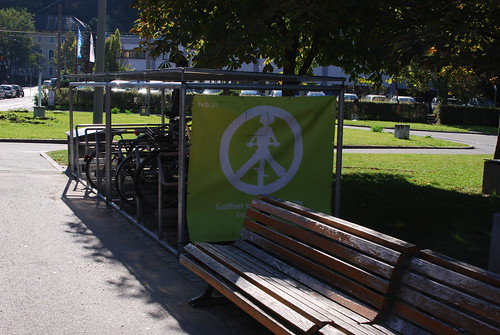 You can of course take your bike on the tram if you want to, 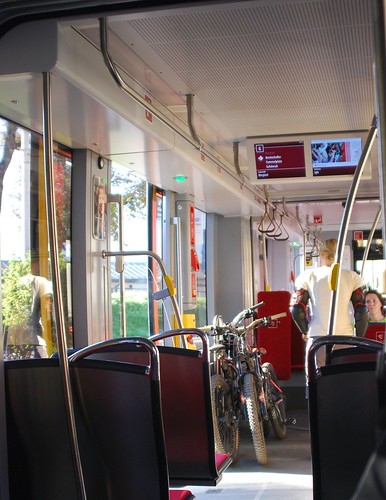 and you can take your bicycle on the bus as well. Unfortunately my pictures of the bike space on the bus didn’t come out too well, but there is space for a up to four bikes, if it isn’t in use for prams or wheelchairs as these passengers have priority for the secured spots. On routes where bike carriage is popular, the buses also carry bikes on the outside. These racks can also, rather conveniently, be modified for carrying skis in the winter. 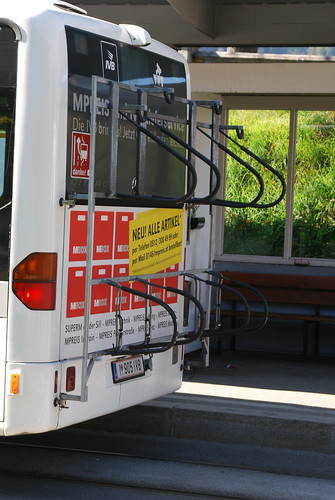 Sorry if you feel I have veered away from cycle chic and onto infrastructure, but it takes good infrastructure to develop a healthy bicycling culture.

Addendum: the modal share of cycling in Innsbruck is 14% and rising.

As we try to make more #spacefordistancing in Edinburgh, it would help of we could not cover the little space we already have in traffic signs and parked cars.

Someone’s been busy in Glasgow. #BlackLivesMatter

will mean an increase in the deployment of mobile speed camera vans and targeted patrols AND SAFE SEPARATED CONTINOUS CYCLE PATHS would help massively. https://twitter.com/NewCycling/status/1268588244566003718