It started out as a conversation on Twitter about The Times’ Cities fit for cycling campaign. We were bemoaning fact that it was all centred around London and there was nothing in Scotland. Dave Brennan, aka Magnatom, who writes The Mind of a Helmet Camera Cyclist blog, was the first to break and announced “I am going to write a blog post about this”, well someone had to. He came up with this call to arms, urging people to ride to Holyrood on 28th April, then sat back and waited to see what would happen. My response was to draft my own version of The Times’ eight point manifesto.

It wasn’t long before more tweets, then e-mails began to fly, a core group formed, and the whole thing started to snowball. A thousand e-mails and a little over a week later we had formalised our manifesto, drafted a press release and produced a website, thus Pedal on Parliament was born!

It wasn’t long before we started to get positive press, but the big surprise was the coverage we got from the Edinburgh Evening News, a paper which hasn’t always been friendly towards cyclists, but this is a very welcome change of editorial direction. We also received support from Mark Beaumont, who said: I support the manifesto points and hope that the politicians do take notice of them. There have been some tragic accidents in recent months and small changes could make the difference between life and death. I’m also glad that the Pedal on Parliament organisers understand that cyclists and motorists must share the road, too many times cycling safety campaigns get bogged down in adopting a them and us stance. I’m both a cyclist and motorist myself and I’ll do my best to be there on the day, too. Thanks Mark, we really appreciate your support!

On Monday morning, I was asked if I could get some people together for a photo call that same afternoon! At that time, only three members of the core group were in Edinburgh (of the others, three are in the west of Scotland and one in the centre), and I did wonder if it could be done. But fortunately, a call on social media for volunteers was picked up by an other blog and the local Edinburgh Cycling Forum. So by five o’clock there was a reasonable turn out for the photo call, and we gained a new member for the core group.

We also have coverage in the cycling press, from road.cc and bikebiz. Day by day the momentum is building, you can now follow the campaign on twitter and FaceBook. There are an increasing number of posters available, with more to come, great work Andy!

As this is a campaign to make Scotland’s roads safer for everyone, whether you live here or visit, you can join in by signing the newly launched petition. Those of you who do live in Scotland, please write to your elected representatives and urge them to support the manifesto to help make Scotland a healthier, happier, safer place for us all to live in. Don’t forget that the Scottish local elections are on 5th May. Now is the time to focus the minds of your local councillors and persuade them to follow the City of Edinburgh’s example and commit 5% of their transport budget to active travel. We can do it, we can make Scotland a cycle-friendly nation again, if we work as if we are in the early days of a better nation!

“Never doubt that a small group of thoughtful, committed citizens can change the world. Indeed, it is the only thing that ever has.”
Margaret Mead 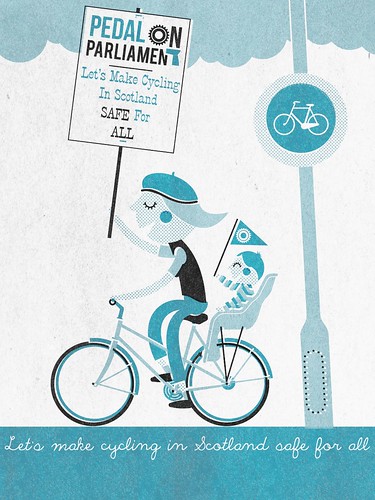 Please sign the petition and get your friends and family to sign it to, and if you can please join us on 28th April at two o’clock on the Meadows, to set off at three o’clock to Pedal on Parliament!!

2 thoughts on “An accidental revolution”

No-deal Brexit would relegate UK to 'minor leagues', says former WTO boss https://www.independent.co.uk/news/business/news/brexit-no-deal-wto-pascal-lamy-trade-a9661161.html Pascal Lamy, who was DG of the WTO, between 2005 & 2013, said there was a stark choice for the UK between 'minor' & 'great' trade relations with the country’s largest trading partner

@kim_harding Not to mention that Cobalt is almost all mined in Congo, in areas controlled by warlords, under appalling working conditions by virtual slaves. Cobalt is the e-car (indeed e-bike or smartphone) equivalent of the Blood Diamond.

What a fantastic gesture by Timpson dry cleaners. Free dry cleaning for the unemployed who have a job interview.

In #Belarus people insisted on what so many of us are taking for granted; democracy, human rights, and a say in the future.

What they got was rigged elections, crackdown on rights, and the ruthless brutality of #Lukashenko’s riot police. https://twitter.com/franakviacorka/status/1292583294576537600

On the left we have a dangerous invader come to threaten our way of life. On the right we have a proud "patriot". Don't know about anyone else but I know which of them is welcome in my home. #supportrefugees