Having successfully picked up the CycleChat Relay Jersey the day before and had a good nights sleep, we rose to a splendidly sunny day. After a hearty breakfast we set off from Coldstream towards Edinburgh, as the weather showed signs of changing with clouds bubbling up and the wind in the east. We jinxed our way along a sequence of side roads to Duns, with a short, sharp hail shower to wake us up; this was pleasant easy cycling. The Scottish Borders are often described as being a cycling paradise (mostly by the Tourist Board) due to the number of quiet wee roads. We were surprised by the number of big houses about, it seemed that everywhere you looked there was a castle here and a mansion there. Ok, so that maybe a wee bit of an exaggeration, but it was obvious there was a lot of old money about.

From Duns we swung East along the A6112, which was quiet for an A road, here again the cycling was easy. After a couple of Km we turned off north onto the B6365 and left the traffic behind. Until this point we had been gently climbing, but the road now turned downhill, which was a wee bit disconcerting as we knew that there was a lot of climbing ahead. Still, there was nothing to do but enjoy the ride, so off we went and sure enough after a couple Km, at Milburn Bridge, the road started to go up again. The hill wasn’t steep but it was long climbing 100m over 2Km. Then another short downhill to Ellemford Bridge, here the road turns and follows the Whiteadder Water up stream. Passing Cranshaws, we lamented the fact that the tea rooms there have closed, as there was no chance for a cake stop before the big climb. At this stage we were climbing but it was gentle easy stuff. 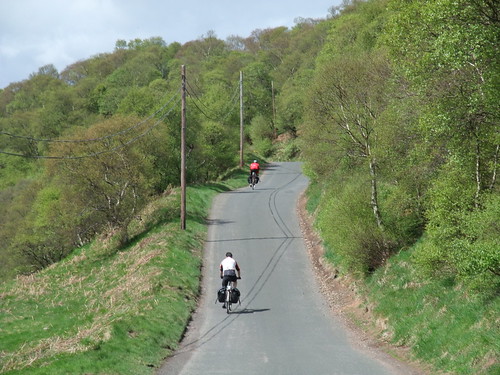 As we approached the dam wall of the Whiteadder Reservoir, we prepared for the short steep climb up the Hungry Snout. This is then followed by a slightly shorter but equally steep drop down the other side. Then there was a gentle pedal along side the Whiteadder Reservoir, contemplating the big climb up to the top of Wanside Rig. Again this wasn’t a steep climb but a long one, gaining 190m in 3.5Km. I had come down it a couple of weeks before reaching a top speed of 69.4Km/h (43 mph in old money) and was fully aware that I wasn’t going to be doing anything like that speed on the way up. Ominously there were dark clouds gathering ahead, we had seen the odd rain shower in the distance, but so far nothing had hit us. So before starting the climb in earnest I stopped and put on a waterproof jacket, then about half way up I had to stop again and take it off again as I getting to hot. As I reached the top, the storm finally burst, throwing rain and hail at us, so there was a scramble to put waterproofs back on again. 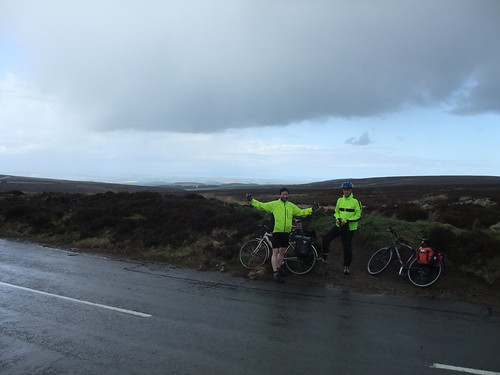 The hill conquered, we were back on the road we had come on the way out, and we headed down the hill we had struggled up the day before. This hill is unfinished business and I heard David shout “I’ll be back”, just like the Styrian Quercus. The road being newly wet and there being a sharp bend half way down, no speed records were set. We then headed straight for Gifford, taking in the Danskine dip along the way, this is 17% downhill followed sharply by a 17% uphill, which is much more fun going north. Arriving in Gifford we took the opportunity for a cake stop at “Love Coffee and Food”.

Try as hard as we could, we couldn’t quite manage to finish the chocolate cake (and we did try hard), it was very nice. Talking to the owners of the café, they told us that cyclists were their favourite customers, as they were always the happiest people. David put forward a theory that cyclists, when they reach a cake stop, are on an endorphin high and therefore happier than the average member of the population. Cake stop over we pushed on to Edinburgh following the mixture of wee roads and off road paths we had used on the way out. Then before the parting of ways we had one last photo stop in Holyrood Park to celebrate the arrival of the Relay Jersey in Auld Reekie, the Athens of the North. 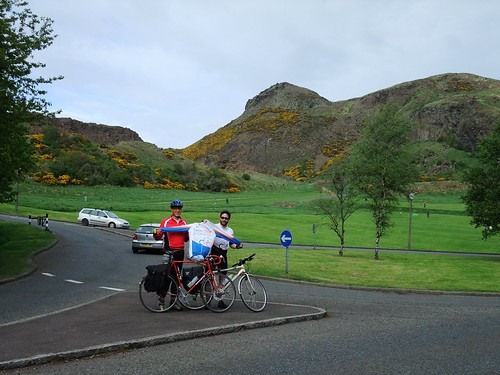 A route map of the journey is here.

"When cargo bikes are used more as a means of transport, social acceptance goes up, costs go down, technology improves, investments in safe infrastructure and better equipment increase, and their influence increases." https://cargobikefestival.com/news/the-contribution-of-cargo-bikes-on-limiting-the-temperature-rise/ The car is so last century...

This driver was already disqualified before wreaking such havoc and risking the lives of police officers. And then only received a further driving ban of 4 years 11 months! Serious question: What does one have to do to receive a lifetime driving ban? https://www.standard.co.uk/news/crime/disqualified-driver-damaged-cars-jailed-a4495541.html

“A time-honored way of providing an immediate lift to economies is to fund infrastructure.” Key question we must ask: what priorities will guide this building, this spending? #GreenCities #FasterSmarterBetter https://infrastructure.aecom.com/2020/the-future-is-now-infrastructures-role-in-economic-recovery

Odd how lets spend £7bn on extra red tape was written on the side of a bus...

More evidence that economy will only recover when virus is sufficiently suppressed. People have changed their behaviour & consumption to make decisions they feel are ‘safe’. The virus is killing the economy, not just lockdown measures. https://twitter.com/bethrigby/status/1282928519627124736