It started with a message on Twitter @kiwikelz Bikepolo #flashmob Festival Square #edinburgh, 5.30pm, Monday 6 June…spread the word… I was intrigued, I had heard of Bicycle Polo, but never actually seen it in action.

Just in case you have not heard of bike polo before, I will give a wee bit of background: Bicycle polo started in Ireland around 1891 and was much like traditional polo, only with bicycles rather than ponies. Within a few years it went international, the first international match being played between Ireland and England in 1901. It was played as a demonstration sport at the 1908 London Olympics, with Ireland taking gold and Germany silver. In the UK bicycle polo reached its high point in the 1930’s and then went into decline. Nowadays, the form of the game most commonly played is “Hardcourt Bike Polo” or “Urban Bike Polo”, and this was the form of game I had come to see being played in Festival Square.

When I arrived at Festival Square (on Lothian Road in the centre of Edinburgh), a court had been laid out in the middle of the square… 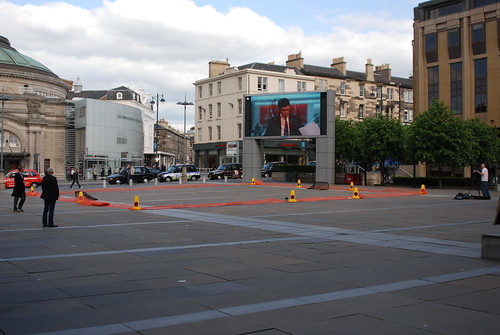 … there weren’t any players about, but soon a couple of guys appeared and started to knock a ball about… 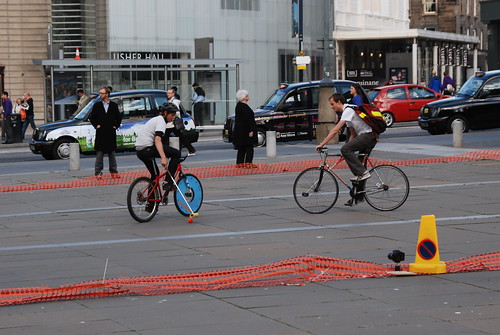 This was just the start, soon there were half a dozen riders on the court, riding up and down. I wasn’t sure if the match had started, but then they separated, three going to each end, there was a shout of 3,2,1 POLO! This was followed by a mad dash for the ball, and a melee ensued. 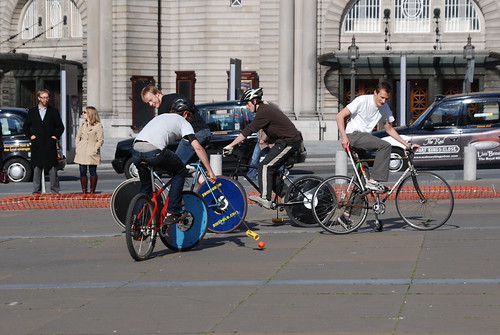 After about 10 minutes it all came to a halt. It wasn’t clear to me who had won or what the score was, but it had been entertaining to watch. From the flyers being handed out, I gathered these were members of the Edinburgh Bike Polo club, and that the game had been staged to get publicity for the up and coming UK Bike Polo Championships, which are on the 16th / 17th July 2011 in Murrayfield, Edinburgh.

Want to know more about how to play bike polo? There is a handy video here, or just go along on a Thursday evening to see it being played in Morningside or Leith (check the Edinburgh Bike Polo forum to see which court they are playing at).

You can see a collection of my pictures from the event here.

One thought on “Bicycle Polo in Festival Square, Edinburgh”

The Tories' planning overhaul is a ferocious attack on democracy | Planning policy | The Guardian ⁦@L__Macfarlane⁩ https://www.theguardian.com/commentisfree/2020/aug/07/the-tories-planning-overhaul-is-a-ferocious-attack-on-democracy

i love that the geniuses of the police department with all their military surplus crap can be rendered completely neutral with some shit from the fourth century BC https://twitter.com/joshuapotash/status/1291962889323020288

Solidarity to all the kids protesting the SQA exams scandal in George Square, but especially to the lad with the “Justice for scheme wains” sign. Iconic.