Saturday morning: Galashiels. We had arrived by bicycle the evening before, having ridden along the NCN 1 from Berwick upon Tweed. The route had been well signed posted until we entered Galashiels along the old Tweedbank railway line and had then faded out. This hadn’t bothered us the evening before as, at that time, we were more interested in finding our B&B for the night. However, in the morning it became more of an issue, we rejoined the old Tweedbank railway line and followed it west, but this led us to a dead end. We looked at the OS map we had with us, and found that this showed the NCN 1 stopping in Galashiels, then starting again some miles away at Peel, to the south of Clovenfords.

We found our own way to Clovenfords along the A72 which was not ideal, as even early on a Saturday morning it was a busy road. When we reached Clovenfords, we noticed a few cyclists hanging out outside the Clovenfords Hotel in the middle of the village. Then, as we turned off the A72 on to the B710, we saw a temporary sign say “Watch out for cyclists”, and we started to wonder if there was a cycling event somewhere in the area. At Caddonfoot, we briefly picked up the A707 before crossing the Tweed to join the old road and the NCN 1, at Peel. This road is a very pleasant ride, undulating above the river Tweed, through fields and along the woodland edge. It is sufficiently far from the new road, on the far side of the Tweed, that you don’t hear the traffic noise and the views are better. Indeed, in many places along the old road you can’t even see the new road. 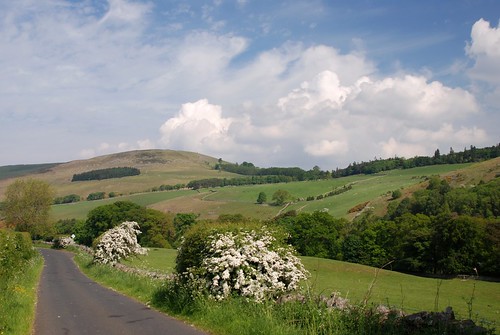 It is a single track road with passing places and gets very little motor traffic, but, on the day we were riding it, there seemed to be lots of cyclists coming the other way. When the first rider came past with an event number on his bars, we thought it might be a local race, but then we passed more riders, not all of whom where on road bikes and they didn’t seem to be racing. It turned out to be the Bethany Trust Cyclosportive, we were meeting outbound cyclists on the 72 mile (115.9 Km) route, there was also a 111 mile (178.6 Km) route. We found this out from a marshal standing at the junction of the B709, where we turned right across the Tweed.

Arriving in Innerleithen, we found that there were bicycles everywhere, many of them attached to cars. Unfortunately some of the drivers of these cars seem to be unaware that cyclists have the right to use the roads, which is rather sad, but that is mountain bikers for you. Our first stop in Innerleithen was a supermarket to pick up some cake, then on to see some friends. In my experience arriving at friends bearing cake is a sure way to be warmly welcomed, especially if said friends have a child under the age of six months and are unlikely to have had the time to prepare anything ahead of your arrival. As predicted, we (and the cake) were welcomed with open arms and invited to come sit in the garden, at which point I asked if we could sit in the shade, as it had been rather hot cycling in the sun. We sat in a cool shady place and were plied with drinks (and ate most of the cake) by our wonderfully hospitable hosts, for a pleasant hour or so.

Suitably refreshed, we set out once more to tackle the big climbs of the day, following the B709 north out of Innerleithen to cross the Moorfoot Hills. At first the road climbs so gently that you hardly notice you are climbing, but that doesn’t last long. The road first follows the Leithen Water. 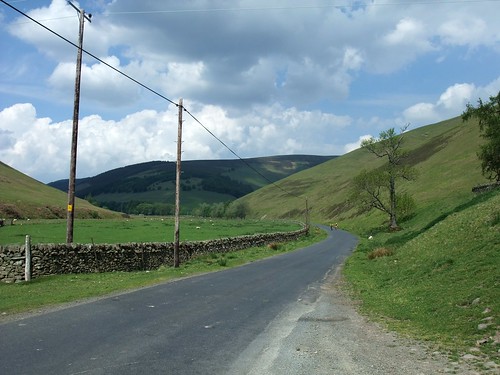 Then after Colquhar it turns to follow the Glentress Water along a narrow glen, the hills seem to close in and enfold you as you climb. Crossing the watershed at the head of the Glentress Water, the road levels briefly before trending downhill along the Dewar Burn. As we had been climbing up along the Glentress Water, there had been an anabatic wind, warming adiabatically, blowing down the glen, but now after crossing the watershed we were met by a cold anabatic wind blowing up the glen. Above us, dark cumulus clouds were forming, we had the feeling that there would be thunderstorms later.

On the way up we had only seen a few cyclists come down towards us, none of them part of the cyclosportive, but as we passed the road coming in from Heriot, they started to appear again. By now we were climbing once again, rather gratifyingly the cyclosportive riders weren’t passing us any speed, they were on road bikes and we were on loaded hybrid bikes with panniers. Topping out of final climb on the shoulder of Broad Law, we were disappointed to find the view to the north obscured by haze, on a clear day this would be a spectacular view. I was also disappointed to find that, here as well, there was an anabatic wind which would have been a delight to a hang-glider pilot, but to a descending cyclist looking for speed it was just a nuisance. Indeed the only decent speed I achieved was on a relativity modest slope after turning left towards Middleton, which was sheltered by trees. 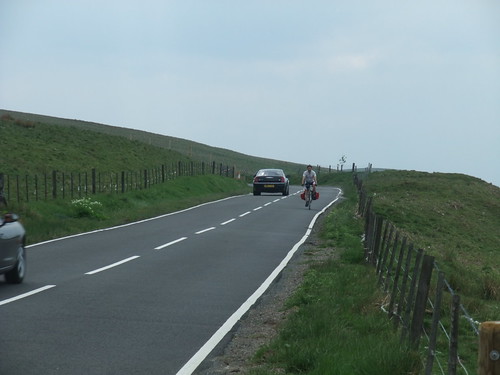 The road beyond Middleton is appalling, with the surface breaking up badly. At one point there was a traffic cone at the side of the road, just past it there was a hole over 1.5 m deep and almost 1 m across. Fortunately there was little traffic other than cyclists on the road, as to be forced over by a motor vehicle into one of these pot holes could be fatal. There are quarries marked on the map, it is not clear if these are all still active, but if they are, this would do a lot to explain the state of the road.

Eventually we popped out on to the B3672 just east of Temple. We followed it west to the Braidwood Bridge, and we were back on familiar ground, so we carried on to Carrington, where we stopped to decide which way to go next. Neither of us was keen on taking the NCN 1 route into Edinburgh. We decided that going home via Polton, as we had done the week before, was not such a good idea, as we knew just how steep the hill was (there is an arrow on the map indicating a 14% gradient on both sides). I suggested going via Auchendinny, but that was too far out of the way, so as a compromise solution we settled on going via Roslin Glen. We were aware that there was a bit of a climb on the far side, but there were no arrows marked on the map. When we crossed the bridge over the North Esk, it came as a bit of a surprise that there was a sign giving the upward gradient as 16%. We both dropped into the granny ring and prepared to grind our way up. Personally I was surprised to find that I was able to smoothly pedal all the way up without resorting to the smallest sprockets, Ulli didn’t seem to struggle either. However, we did pass a couple who were pushing mountain bikes up. Beyond Roslin, we picked up the main road at Bilston and followed the familiar commuter route home. Just after reaching home ,the threatened storm finally broke and the rain bucketed it down, with thunder and lightening in the distance over the Moorfoot Hills.

My stats were (mostly lost):

👨‍👨‍👦‍👦Are you thinking about ditching your family car? Be a role model for your children and give #CargoBikes a try!

🚵The next @CycleLogistics webinar will explore why every family should rethink their choice of transport.

I’ve seen a glimpse of 2024, post-COVID and face coverings are still being debated in the UK. #marr Scotland has just made them mandatory in shops & public transport & compliance seems good. Enough circular debates on what to do & more focus on implementation & logistics.

Sadly not in Edinburgh, which is currently going backwards...

First time using the Baldoyle Greenway. What a wonderful piece of infrastructure!!

Shame it doesn't connect to either village, forcing people to cycle the first & last few kms on the busy main road. A little more ambition would make this wonderful facility accessible to everyone