In my first post on Bringing home the harvest I wrote about how I was unsure as to just how we were going to get the biggest pumpkin of this year home. The ideal solution would be a cargo bike, but where to get a hold of one?

However, before I go any further I think I should just introduce the biggest pumpkin we have grown year… 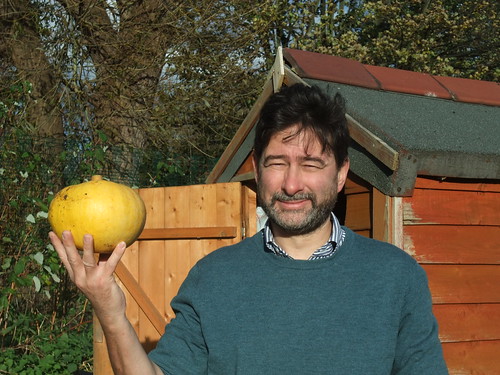 No not that one! This one… 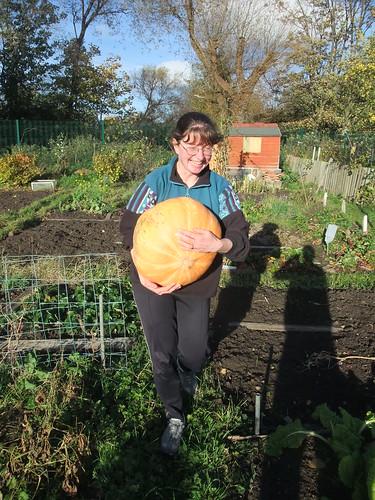 Right, so now you get some idea of the scale of the problem, there was no way that thing was going to fit in a pannier. So the options were either hire/borrow a cargo bike, borrow/hire a bicycle trailer, or get a friend with a car to drive it back for us. Well, the last one was a sign of desperation, the preferred option was either one of the first two solutions. So where to get either a hold of a cargo bike or a trailer? I knew that the Bike Station do have a number of cargo bikes, and that there used to be something about hiring cargo (and vintage) bikes on their website (alas no longer), so I sent them an e-mail asking about it. So far, I have yet to get a reply.

Having failed to get a response from the Bike Station, I decided to experiment with the new social media and posted up a request to hire/borrow a cargo bike or a bike trailer, on Twitter and on a local cycling forum. The first reply was from the cycling forum with an offer of a Revolution child trailer. I also received offers of another cycle trailer from Greener Leith on Twitter and a Nihola family trike, also on Twitter. The Twitter offers came in just after I had accepted the offer on the cycling forum.

So far, so good, but of course things in the real world never run as smoothly as in the virtual world. I was discussing the collection arrangements with the person who offered the loan of the bike trailer (we will call her S) over the forum’s Private Messaging (PM) system, when we both lost the PM thread. Her PM thread disappeared first, so we started a new one, at which point I should have taken note and made a backup (or just written it all down on paper). Then I lost the PM tread about about an hour before I had planned to pick up the trailer, just as I was about to confirm the details. Therefore, I didn’t have S’s phone number or address, I just knew that she lived (conveniently) part way between my home and the allotment. Fortunately, I noticed that the forum admin was on-line, so I e-mailed him to ask if he could pass my phone number to S. Ten minutes later S phoned me and we were able to get things back on track, phew.

From the PM discussions I had had with S, I knew both my bikes might have a problem mounting the towing hitch, on the CdF because there is a protective cuff around the rear drop outs, and on the Norco because the rack mount is very close to the QR skewer. I took the Norco anyway, and sure enough, the towing hitch didn’t fit. Fortunately Ulli had brought her Trek, which was an easy fit. Having picked up the trailer, it was on to the allotment to load up the pumpkin, and also to do a wee bit of harvesting of other things and tiding up before the winter. Given the size of the pumpkin, we decided that it was best strapped into the child harness in the trailer, to stop it moving about in transit. 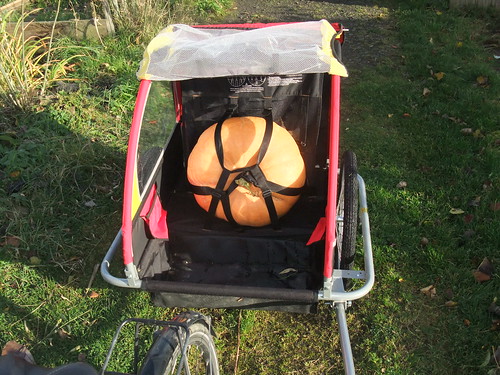 After a short discussion, it was decided that we would take it in turns to cycle the pumpkin home. I don’t normally like riding Ulli’s bike, but in this case I was going to make an exception. Ulli took the first half of the ride and chose to go along via the canal, I expected her to struggle a wee bit on the road up to the canal, but she managed it fine. However, on the short down hill section from the bridge to the tow path, she found the limitations of her brakes and was lucky not to go straight into the canal. We got some interesting/ed looks and comments as we proceeded along the tow path, especially when people saw the pumpkin. The most pleasing comment was from a couple with a push chair, who, on seeing the trailer, said “we could do with one of those”. 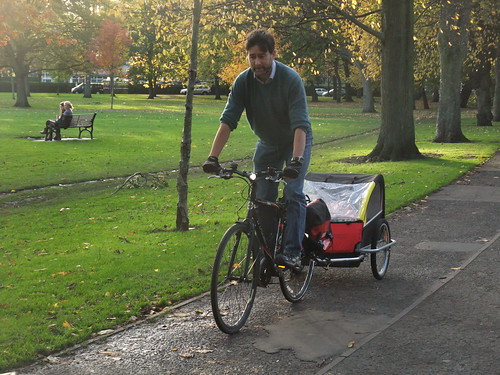 It wasn’t until we got to the Meadows that I was finally given the chance to have a go at towing the trailer, it was an interesting experience. Pulling away required a bit more effort that usual, probably as the bike needed to be in a lower gear than usual and wasn’t, first lesson leant. While getting up to speed, there was an odd slight jerking, but this stopped once I was at cruising speed. The loaded trailer was surprisingly stable and easy to ride with, for the most part other traffic gave us plenty of space. However, there was one idiot who misjudged the length of cyclist and trailer, and had to stop mid overtake when the on coming driver started flashing lights. (There had to be one, sigh.) Overall it was a great way to get the harvest home.

Yes, I'm an activist. I believe in things and feel passionate about causes like all other humans. That doesn't make me less of an academic or scientist. Academia should stop this silencing in the name of rigour. It's toxic. Being true to self cannot be bad for science.

This appears to be caused by lightning. The moist insides conduct electricity better during a lightning strike. The sappy interior is heated, the pressure probably cracked open this trunk. If conditions are dry these fires can spread 1/2

The one transportation choice where the journey is at least as good as the destination.

A cycle in Holyrood Park in three photos...

Try a @cyclehire_edi bike, think Holyrood Park will be a good place to try cycling, immediately feel unsafe, and ride on pavement instead.