For a long time Ulli has talked about visiting Bute, “the Jewel of the Clyde”. Also, there have been a number of searches which have visited this blog looking for information about cycling on Bute (visiting posts where I have written about cycling on other islands with a view to Bute). So it was that Bute was the obvious place to go for a long weekend. Despite the annual Jazz Festival happening over the same weekend, we still managed to book a B&B in Rothesay. Rothesay is the capital of the island and the only real town, there is very little accommodation outside Rothesay, unless you want to wild camp. However this isn’t a problem, as Bute, unlike some other islands, doesn’t have a circumnavigatory road, so staying in one place and making out and back trips and loops are the way to see the island, without having to carry all your luggage around all day.

Getting to Bute was easy, train to Glasgow Queen Street, then a short walk/cycle to Glasgow Central (as usual I managed to miss the turn off into Gordon Street half way down Buchanan Street), train to Wemyss Bay where the ferry terminal is attached to the station., For cyclists to get onto the ferry, you have to buy the tickets at the foot passenger ticket office inside the terminal and then go around the outside to board via the car deck. I like ferries, feeling the vibrations of the deck plates coming up through my feet always reminds me of my sea time with the Grey Funnel Line. The crossing was smooth, although the sky was grey and there were heavy showers moving along the Firth of Clyde, not the weather we had hoped for, at the beginning of May.

Once alongside the pier in Rothesay, we were piped ashore, busking at the pier seems to be a popular way of supplementing their pocket money among the local teenagers. Then it was just a short ride to the B&B to drop off a pannier. For some reason it seemed to be the lighter one, I spent the whole trip lugging 5 kg of bike tools and a camera around with me. The next task was to find lunch. As the Jazz Festival was on this, was supposedly one of Bute’s busiest weekends of the year, but we soon found a wee tearoom by the Craigmore Old Pier (the Pier is long gone) with space and sea views and didn’t have to resort to buying rolls from the Co-Op.

Lunch over, it was time to get down to the serious business of exploring the Island, first stop the Isle of Bute Discovery Centre which gives a broad overview of the islands past and present. We discover that the island is transected by the Highland Boundary Fault, with the north being more Highland like and the south more lowland, although this is less pronounced than on Arran. We decided to take on the north first. Riding along the shore road through Port Bannatyne we saw a sight which wasn’t mentioned in the Discovery Centre, but one that stops tourists in their tracks and has them reaching for a camera. I refer of course to the “Hanging bike of Port Bannatyne”, no I don’t know why it is there either. 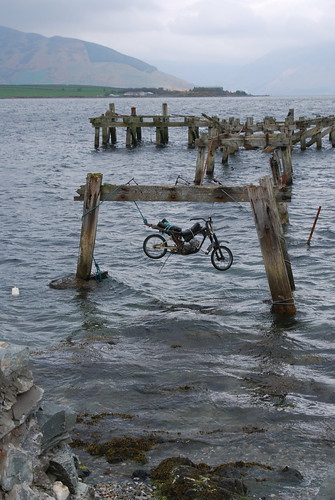 Having exited Port Bannatyne, we turned left at Kames Castle onto the road for Ettrick Bay. There is a short hill here, nothing challenging, but it does give a good view point down on to the castle, which is one of your bog standard tower houses so favoured by Scottish lairds, in fact they like them so much at Kames there are two. At the crest of the hill we passed St Colmac with its ruined church, built in 1836 by the second Marquess of Bute, closed in 1980 and now being left to collapse. Just there, the road forks and we took the right fork, alongside which runs the line of an old tramway. Back in the halcyon days of Bute’s tourist past a tram ran from Rothesay to Ettrick Bay, where there was a dance hall and tea rooms. Well the dance hall is long gone, but tea rooms are still there and the ice creams they serve are very good. Beyond Ettrick Bay, the black topped single track road runs along a raised beach as far as Glecknabrae. It is possible to follow the farm track to Kilmichael, but disappointingly the road doesn’t continue to Buttock Point and the Maids of Bute. We decided to turn round and go back the way we came (not that there was much choice).

Having crossed the island back to the eastern side, we turned north once again, up along the east coast, where the raised beaches are far less pronounced. We went as far as the Rhubodach ferry. Just after the slipway there is a short stretch of new tarmac and the road bends. I turned to ask Ulli how much further the road went (she had a map on her handle bars), as I turned to look forward again I saw that 10 m ahead there was a closed gate with a rough track beyond, which kind of answered my question. Time to turn around again. At least this time the wind was at our backs.

Photos from Bute are here. Day two is here and day three is here.

There is a map of our route on day 1 here.

My stats for day 1 were:

One thought on “Biking about Bute – Day 1”

BREAKING: "I declare today the resignation of this government."

Lebanon's PM Hassan Diab announces the resignation of his gov't amid anger over the Beirut blast.

Petition: Fund the construction of segregated cycle paths alongside all A roads https://petition.parliament.uk/petitions/320918 come on, this needs more signatures. Please, sign and retweet...

Petition: Fund the construction of segregated cycle paths alongside all A roads https://petition.parliament.uk/petitions/320918