One of the good things about living in Edinburgh is that there is no shortage of people wanting to come and visit you, this time it was Ulli’s cousin Bernhard. Now Bernhard is a keen cyclist so we want to be able to take him out cycling, but he wasn’t too keen on trusting one of his bikes to tender mercies of an airline baggage handle. So we decided to rent a bike for the week he was here. After a wee bit of research I established that there were two options for cycle hire in Edinburgh: Biketrax who offer city bikes, mountain bikes and Bromptons, none of which were ideal for what we had in mind. Then there was Edinburgh Cycle Hire (aka Rent-a-Bike Edinburgh) which also offered city bikes and mountain bikes, but more interestingly road bikes as well.

Having asked around, I had been told that it was best to phone in advance if I wanted to use Edinburgh Cycle Hire, as their opening hours could be unpredictable. So when I phoned and didn’t get an answer, I thought that renting from them was out, but to my surprise within five minutes of my putting the phone down, Peter from Edinburgh Cycle Hire phoned me back and apologised for having missed my call, obviously someone who wanted to do business. So I asked what sort of road bike did they hire, and was told they had a couple of Dawes Galaxies available, this sounded ideal for the cycling we had in mind, although at a £100 a week it was not cheap. After consultation with Bernhard it was decided to rent a Dawes Galaxy for the week that he was here.

Bernhard, having arrived in Edinburgh, and I went to pick up the Dawes Galaxy from the shop in Blackfriars St., which had been brought down from Perth the night before. The first surprise was that the bike wasn’t exactly in the first flush of youth, this wasn’t what I had expected as their web site states “Every year we sell-off our fleet of rental bikes and renew our stock”. Still, the Galaxy is a classic British touring bike and, so long as it is well maintained, will last for years. A quick inspection of the bike showed that it had two left pedals (or one of the toe clips had been attached the wrong way round?). Bernhard had brought his own SPD pedals, so these toe clipped pedals were quickly removed and the thread inspected, fortunately it had not been stripped. A further inspection of the bike showed the brake blocks to be badly worn. Peter explained that the mechanic whom he had just employed for the season had left after two days, and this was one of two bikes which had just be returned from a two week hire the day before, and that he hadn’t had time to check them over fully. Bernhard offered to change the blocks himself, so long as new blocks were provided, and a set of V-brake blocks (the only ones in the workshop) were duly provided. As an offer of good will Peter threw in a pair of panniers and a bar bag for free (normally £15 for a week’s hire), even though Bernhard was happy to do without them.

Having got the bike home, Bernhard set about changing the brake blocks, after much cursing of cantilever brakes, the rear blocks were fitted. Then, as he set about making the final adjustments of the blocks, he noticed that the wheel was out of true. On closer inspection we found that there were cracks in the rim around some of the spoke holes and that several of the spokes were loose, one was even kinked. So after a short phone call, we were off back down to Blackfriars St., where Peter was waiting with a rear wheel off one of the hybrid bikes. However, a quick inspection showed that this had a 9 speed cassette and the Galaxy an 8 speed cassette and indexed gears. After some discussion, Bernhard offered to swap the cassettes over himself, and after some further haggling a 10% refund on the week’s hire was agreed to compensate for the repair work.

The details of the cycle trip will be covered in further posts, but at the end of the week, when we asked Bernhard what he thought of the bike, he commented that, if he were to buy a touring bike, it would probably be a Dawes Galaxy. 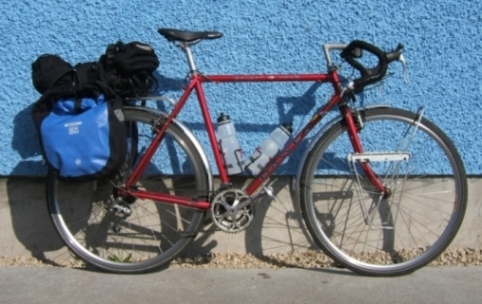 Addendum: Since this post was written in 2008 the number of place you can hire bike in Edinburgh has increased considerably, you can even hire a cargo bike.

4 thoughts on “Cycle hire in Edinburgh”

No!
No!
No!
Hey @SurreyRoadCops you have let me (and all the others who had your twitter account right up there with those of @WMPTIU @MetCycleCops @SuptAndyCox ) DOWN*.

CARS do not "lose control".

Modal filters like this help create safe, low-traffic neighbourhoods whilst retaining emergency and residential access - who wouldn't want this at the end of their street?!