Just over five years ago (in September 2009) I wrote a blog post “Cycle parking, please can we have more…” in which I talked about the problems with lack of secure bicycle parking in Edinburgh. I flagged up issues the particular problems for tenement dwellers in Edinburgh, where storage is often a very real problem (as it is across most Scottish cities), added to which people living in tenement areas are less likely to own a car.

Three years ago things were looking positive as there where the first glimmerings of hope that something might actually be happening. There had been an announcement that City of Edinburgh Council (CEC) has proposed a Pilot of on-street residential cycle parking. I was one of the first to put in an application and waited with bated breath, well almost. As the closing date for application was December 2011, it seemed reasonable to expect that here might be something on the ground by the summer of 2012. In early May a letter arrived inviting all those who had applied to be a part of the trial parking project to a site meeting to consult on how it might work in practice. So it was that my self and one of my neighbours met with a number of officials, including the CEC’s cycling officer (Chris Brace), a CEC Project Engineer (Scott Mannion), one of the environmental manager (David Doig) and LBP Crime Prevention Officer (Carol Menzies). We had a wide ranging discussion, as we stood in the spring sun shine, covering all aspects of how that cycle parking (and its location) could affect the street, from accessibility to security, from refuse collection to turning space, and more. The meeting ended with a general consensus that the best location for the cycle storage was at the southern end of the street on the west side, on an area of concrete pavement which is currently just dead ground. It felt like something was really about to happen after two years of campaigning and lobbying, finally we were getting what was needed.

For a couple of months nothing happened, no information, nothing. In late July 2012 a letter arrived saying that the council was going to hold a written consultation for all residents in the street. A number of my neighbours came to ask me about this as they wanted to know more about the proposal, everyone I knew who lived in the street was in favour of the idea of having a secure cycle parking facility (even those who owned cars and those who didn’t own a bicycle). The written consultation was than followed with a series door to door interviews, and it was beginning to feel like someone at the Council was doing all they could to find an objector, so that they could stop the scheme (maybe I am being too cynical here).

Following all this consultation things went quite again until late June 2013 when another written consultation arrived, this time with plans showing the proposed location of the cycle storage on the opposite side of the street from that which residents said they wanted in the earlier consultation. I am told that there eleven responses to this consultation, all in favour of having the cycle storage on street and three saying explicitly that it should be on the far side of the street (the other made no comment on the location). One wonders why it is felt necessary to have quite to much “consultation” when they don’t bother to take notice of what the people who are going to live with the infrastructure actually have to say. It strikes me that a large amount of public money is wasted in this way.

Move forward to June 2014 and the City Council break their radio silence again with a letter to say that three different types of secure on street cycle storage across five locations across the city. The three types of storage chosen were the Cyclehoop Fietshangar, Cycle-Works Velo-Box lockers and Cycle-Works Streetstores (the latter a somewhat experimental design to judge by their website where there are several different prototype designs shown). The letter went on to say that the installation would be completed by the end of July 2014.

By this time I was starting to feel I would only believe when I saw it, so you can imagine my surprise and delight when I was told of shiny new Cyclehoop Fietshangars had been sighted in the city! 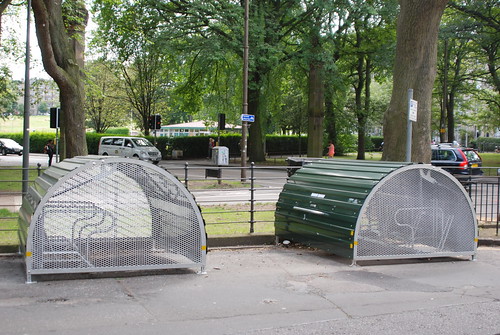 Then came the news that Cycle-Works Velo-Safe lockers had also been sighted. 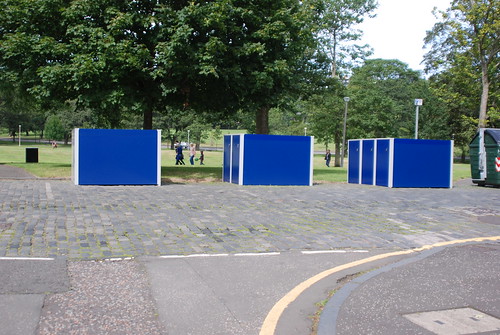 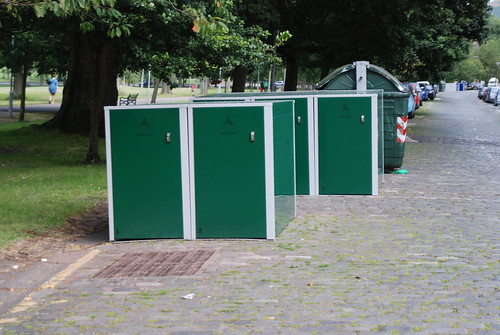 This was real progress at last! But wait where were the Cycle-Works Streetstores? There was no sign of them anywhere and again silence from the City Council, after some prompting there was a few vague comments that they were coming soon. July turned to August, the Festival came and went, September, still nothing, then finally in October Streetstores were sighted for the first time! 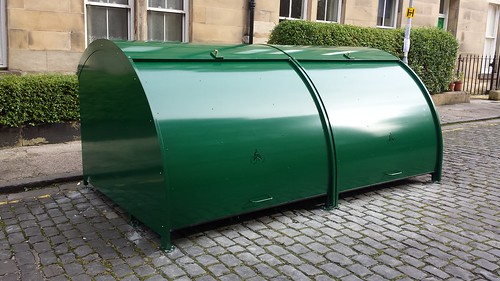 How does the scheme actually work? Now there’s a question I keep getting asked, well, places in the cycle storage is offered to first to residents living within 100m of the stores. Only two places per flat are allowed per flat (which is rather unfair on students living in Houses in Multiple Occupation or HMOs) and place are allocated on a first come first serve basis. Each person gets a gets an individual contract and must give the details of the bicycle they are intending to store. The contract also states that the storage can only be used to store “a security-tagged bicycle belonging to or in the care of the member”, later in the contract it talks of bicycles with a permit and displaying a permit sticker.

As to costs and pricing, the contract states that “during the period of the Scheme the Council will not make a charge for participation in the Scheme. The Council may bring the pilot Scheme to an end on giving 14 days’ notice to the Members, and thereafter charge the Member for continued participation in a new scheme and take a deposit for the access key”. Nowhere, in the contract does it give any indication of how long the pilot Scheme will run for, nor is there any mention of how much the charge might be in the future. Elsewhere, it has been stated that the “cycle parking would be … trialled for around 2 years“. Also “It is expected that there would be a charge of around £5 per month per user for the use of the covered storage options to help cover running costs”. This would mean that it would cost £60 a year to park a bicycle compared with £31.50 to park low emission car in the same permit zone. When you bear in mind that ten bicycles can be accommodated in the space required for one car, this seems rather excessive, no doubt the Council will say that this reflects cost of maintaining the cycle storage, whilst blithe ignoring the costs involved in controlling car parking in the city. If the council are to introduce such a high charge for cycle parking, then it would only be reasonable that all subsidies for car parking be dropped and that the cost of car parking be brought up to a matching level.

One thought on “Cycle parking, things are finally moving on…”

Leave a Reply to Andy in Germany Cancel reply

Right...any more MPs grown a backbone so they can stand up and be counted? You can't pretend to serve your constituents and then completely ignore them?

Absolutely terrible to hear about all the looting happening right now. Someone should intervene https://twitter.com/CNBC/status/1263510923056164870

@redhistorian Horrific. You'll be saying next that the Government get to pick which 50 MPs are allowed in. How DO they decide? Why is the Speaker leaving it to Govt to devise a voting scheme? Insanity.

6. Ministers could do this, in the teeth of cross-party opposition, merely by refusing to table the necessary Standing Orders. If we are to maintain proper democratic scrutiny of govt, we *have* to loosen the grip of the Executive over the institution that holds it to account.END

5. The govt did not choose to have a pandemic that made it so hard for Parlt to function. But it can choose how to respond. The goal should be to expand participation, not shrink it; to use every possible tool to allow MPs to participate. Instead, it has barred the digital gates.