The borderlands of southern Scotland must be one of Scotland’s best kept secrets. Few of Scotland’s visitors ever stop there, preferring instead to just head straight through on the big roads towards the far more famous Highlands. This provides those of us who enjoy touring by bicycle with an opportunity and a challenge. The opportunity: to ride and explore an area of dramatic and contrasting landscapes, which is relatively free of motor traffic. The challenge: to get there from Edinburgh while avoiding the big roads with fast motor traffic. At this point I should make it clear that when I talk about the Scottish Borders, I am referring to them in their historical context, rather than the modern administrative area of the Scottish Borders Council

After a late spring and a poor early summer, we were both keen to get out touring but were less fit than in previous years (well I was at least, less fit that is). So the first question was, where to go? Having explored some of the eastern side of the Borders previously, we felt it was time to have a look at some areas further to the west. I had long wondered about going down the west side of the Pentland Hills as an access route to the Borders. However, Ulli is not so keen on the idea of riding on the A70. After a (long) period of staring at the map we realised that there was a network of wee roads just to the west of the A70 and these could give us the quiet access route we where looking for. Having found a way in, we had to decide where to go next. We thought it would be a good idea to swing east, and stop overnight in Broughton. Then the next day we could head over to Innerleithen to see some friends, before heading back to Edinburgh along the NCN1.

Well that was the plan, and plans are there to be changed. The first change came when we decided to miss out the tedious bit out to Livingstone and use the train instead. The purists may object to this approach, but I prefer to take a pragmatic approach and enjoy the bits I choose to ride. Besides which, bikes travel free on trains in Scotland and the fares for the two of us weren’t going to break the bank.

Having left the train at Livingston (South) station, we set off to find the next place to deviate from the plan. This didn’t take long as we sailed past the left turn we should have taken and ended up on the A71 instead. Now this road does have a cycle lane painted on it, but several motorists seemed unaware of its purpose and insisted on trying to drive down it. Fortunately we managed to find an industrial estate to cut through and get back to the planned route.

With the urban sprawl that is Livingston behind us, we were out into open countryside, a mixture of buggered heathland, buggered acid grassland, and plantation forestry. We also had a fine view of some of the West Lothian bings, a legacy of one Scotland’s previous energy booms (whether it be oil shale or coal). Ahead of us, looming up out of a forest plantation, was a symbol of the next Scottish energy boom, a couple of the turbines of the Pates Hill Wind Farm, towering above the trees. 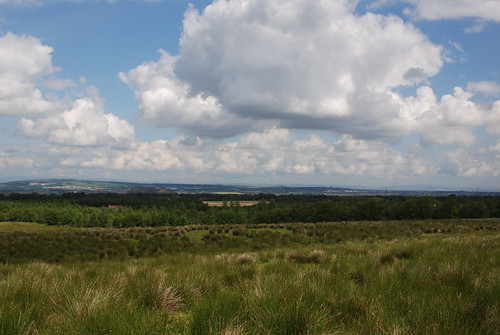 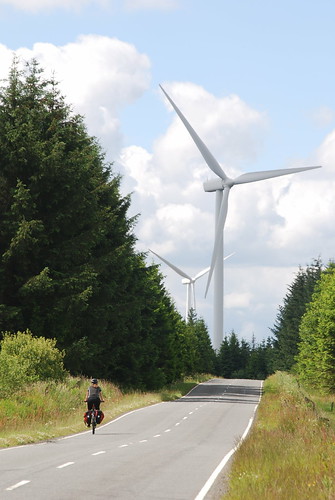 Personally I find these structures majestic, I know they are not to everyone’s taste, but they are a lot more benign than Scotland’s previous energy booms. Up close, I was surprised by how quiet they were. The sound of the 107 m blades turning was drowned out by the noise of a bunch of model aeroplanes being flown by the West Calder & District Model Flying Club. Whether this would be different in higher winds, I know not.

We crossed out of West Lothian into South Lanarkshire, and passed by a row of former miners’ cottages at Woolfords, another legacy of the oil shale industry, no other obvious sign of the open cast mining could be seen. This was the first time we had cycle toured in South Lanarkshire and we weren’t sure what to expect. The area has a grim post industrial reputation, but we saw little sign of this, for the most part it was just rough grazing. Dotted about the place there were new built houses which did look totally out of place. They were mostly of brick construction and no architectural merit, they wouldn’t have looked out of place in Essex, but were totally wrong for southern Scotland, there was nothing of the vernacular about them. The people we passed (or were passed by) were all friendly, no hassle from the few drivers we saw on these quiet back roads, there were nods and smiles from two guys standing outside a pub.

Reaching Carstairs, we decided it was time for lunch. However, there was no café or tea rooms. There had been two pubs, the Village Inn (now boarded up) and the Carstairs Arms Hotel (now converted into a B&B), so we just went to the Co-op (the only shop). The village has seen better days in its long history, originally Caisteal Tarrais (Castle/Fort Land) the castle is said to have been demolished and converted to a church by the Bishop of Glasgow under orders from the Bishop of Rome in the 12th century. Another theory is that it was named after the Roman fort about a miles SSW of the village. It was made a Royal Burgh in 1128 by David I, 14 years before Lanark. Now it is better known for the nearby Hospital and the nearby railway station at Carstairs Junction, where the west coast mainline divides, sending trains to Glasgow and Edinburgh.

Him: Excuse me, do you mind if I ask how far you ride that bike?
Me: Do you mean a day? [bemused]
Him: Yes
Me: Um, about 50 to 60 miles [80km – 100km is our normal daily distance for touring]
Him: 60 miles a day!?! [as if I had told him I rode the Tour de France, although I could use a wee bit of EPO, anyone know the combination for Contador’s fridge?]
Me: Yes [even more bemused]
Him: Do you not find that you burn out?
Me: Um, no [100km is a normal daily distance for touring, why would I burn out?]
Him: Well you are looking very well on it, very fit and healthy… [actually I am 5Kg over my idea weight, which I was at last year]
Me: Thank you.
Him: Thanks, Cheers..
With that I retreated to a picnic table on the green to eat lunch.

Lunch over, we set out again, heading south through Carstairs Junction (which seems bigger than the original village), shadowing the railway line and crisscrossing the River Clyde. At Covington, I tried and failed to get a satisfactory photo of the ruined tower house and the Doocot. At Thankerton, Ulli insisted on stopping to take photos of some Clydesdale horses. Ah, the joys of cycle touring, no rush, just stop and take photos where ever you think you can get a good picture. 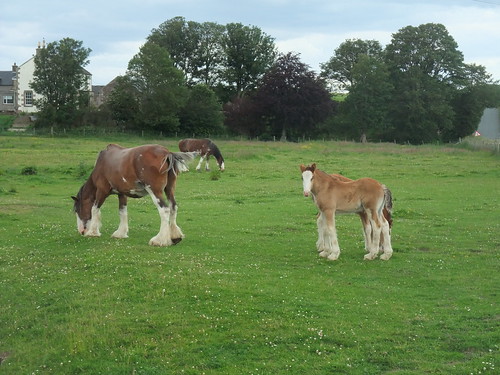 Clydesdale photo taken, we crossed the Clyde for the last time and headed for Biggar, a busy wee market town on the banks of the Biggar Burn. There has probably been a settlement on the Biggar Burn since Mesolithic times as it is a natural cross roads, sitting as it does on the watershed between the rivers Clyde and Tweed. It also sits astride one of the main routes from SW Scotland to Edinburgh (A702) and the modern road follows the course of the earlier Roman road. These days, one of the most notable features of Biggar is that it is aiming to be the first Carbon Neutral town in Scotland. One thing is certain, it is most definitely not a clone town, it is full of independent shops which make it a great place to stop and browse. So naturally we had to find a café where we could sit outside with tea and cake.

Beyond Biggar, we had a choice of routes for passing the Hartree Hills, either stay on the north side or take the slightly shorter route around the south side. This might seem like an easy choice, but the difference in distance is only about 30m and there is the small matter of the two chevrons shown on the map for the southern route. After a short discussion we decided to part and meet up again at Kilbucho Place, needless to say that I was to take the high road. The climb between Knowehead and Crosscryne was interesting, a gain in elevation of 70m in the space of 500m and that was just to the junction. Having turned left around the end of the wood, I was disappointed to find there was another 20m of climbing before I could start the downhill. Yippie, but, it wasn’t a rapid descent as I couldn’t be bothered to push it, and I hadn’t even got half way to Kilbucho Place when the hill ran out. The onward road was undulating, fortunately this wasn’t a race because Ulli was there first by about a minute.

On the corner opposite Kilbucho Place we were introduced to Angus… 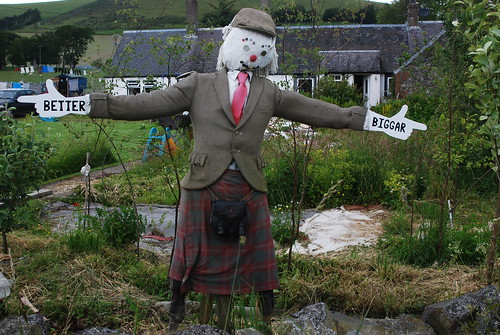 … the sign post across the road didn’t show the way to Biggar and the owner of the cottage got a wee bit tired of being asked which way to Biggar, so he set up Angus to let people know. We didn’t need to ask direction to Broughton, as we could now see it nestling among the trees below its Heights. 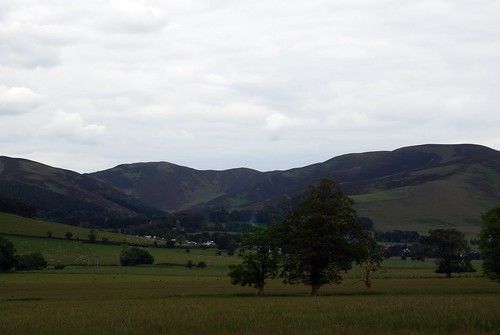 Having arrived in Broughton we headed for the B&B, unloaded the bikes, went out to explore Glenholm glen, before heading into Broughton for supper at the Laurel Bank Tearoom Bar & Bistro. After all we had to make sure that we had done our 80 Km for the day.

My stats were (Station to B&B):

Details of the return ride are here.

Yes yes yes! When we looked at this issue for cycling, we found 94% of crashes went unreported https://eastoxfordgroupe.files.wordpress.com/2008/10/oxcamcycling-survey1.pdf https://twitter.com/TrafficSafety/status/1352278258398633985

I didn’t realise until now that the Paris Climate Agreement was actually about the climate in Paris. https://twitter.com/sentedcruz/status/1352040800646029312

This looks like a photoshop job, but who can tell truth from fantasy in this sovereignty filled utopian form filling bureaucracy any more.

If you're not doing so already...Please buy British bananas 🇬🇧
Grown in abundance in the sunlit uplands, under the rainbow of mis-truths.
Go on. Spoil yourself.

'The long-term danger to cities isn’t that downtown jobs will disappear; it’s that commuters will need their own car. Cities don’t have room for a car-driven recovery—which would worsen racial & economic disparities. We cannot allow transit to implode.' https://www.theatlantic.com/ideas/archive/2020/12/public-transit-has-come-back/617435/