If you haven’t read part one (Saturday to Tuesday), it is here.
Which brings us to Wednesday: it rained, so we watched the Olympics on TV and made just one brief foray out to the Lockerbie Truck Stop, to get a paper.

On Thursday, we had two objectives: one, to visit a Historic Scotland property so that we could use our membership card and two, to meet up with a fellow blogger. Given these requirements, the obvious places to go to were Caerlaverock and Dumfries. The ride down to Caerlaverock was fairly straightforward, riding along the pretty, quiet roads of Annandale, although it was somewhat into the wind. At Dalton we had the novelty of finding a village with a pub (which hosts a Thai restaurant), but it was too early for lunch so we carried on south. Apparently, Dalton also has a Pottery Art Café, which is the sort of business which I had hoped to see more of, but we didn’t, because we took an even quieter road (and there were no signs for it in the centre of the village).

Further along the road, before reaching Ruthwell, we missed the opportunity to see the Ruthwell Cross, one of the finest Anglo-Saxon crosses in the UK. I think there was a sign for this, but it wasn’t until I did the research for this post that I realised it was worth a detour. Oh well, next time. We also missed the Savings Banks Museum, this one was clearly signed posted in Ruthwell, another thing to visit next time round. It was at Ruthwell that we picked up the NCN 7 Lochs & Glens (South) cycle route. For few miles we were side on to the wind for a change rather than a head wind, but it wasn’t to last. At Bankend we turned straight into the wind once again, I took the front forging forward allowing Ulli to shelter behind me. It was hard work but didn’t mind, well until the road started to rise up I started to flag, at which point Ulli promptly nipped out and dropped me. That girl watches too much pro cycle racing on TV… *Sigh*. (She tells me she was doing a Froome, to my Wiggins being left behind, without the race radio calling her back.)

Arriving at Caerlaverock Castle, I was relieved to find that Historic Scotland has a lovely little café with friendly staff and good food. The castle was the seat of the Maxwell family, and in times past would not have been a comfortable place for a member of the Johnston clan, but those days are gone. In the August sun I rather enjoyed wandering about taking photos of this relic of the past in complete freedom. 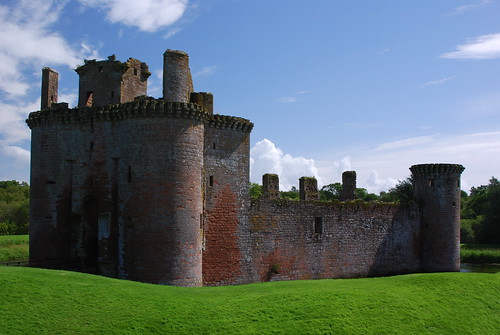 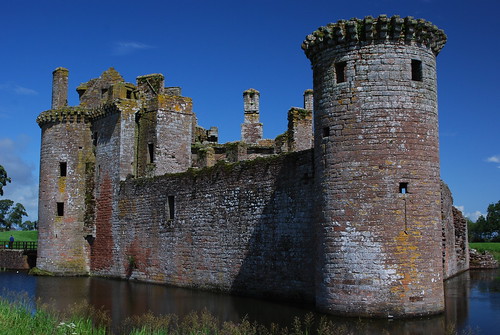 It was also interesting to take the short walk through an area of wet woodland to the site of an earlier castle, it was fascinating. There is very little of this type of woodland left in Scotland today, but at one time it would have covered large areas of southern Scotland. So much so that the Romans thought that Northern Scotland was an island cut off from the south by a sea of bog and swamp.

The other good thing about visiting Caerlaverock Castle is that it has a café (have I mentioned the café already?), which is probably why the cycle parking was also full. As it was now late lunchtime, we took full advantage of the café facilities, before setting off for the place a blogging friend of mine calls Big Town, yes, the mighty metropolis that is Dumfries. To get there was simply a case of following the NCN 7, but some of the signage is rather interesting in its suggested routing. 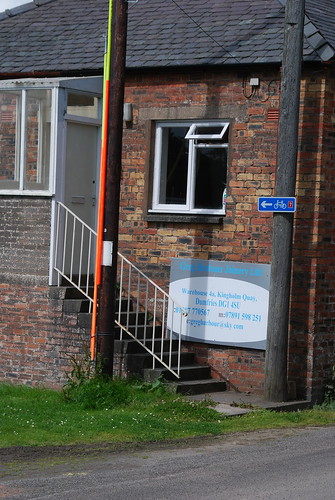 Once you have found your way across the Nith, it is a straight forward ride into Dumfries. 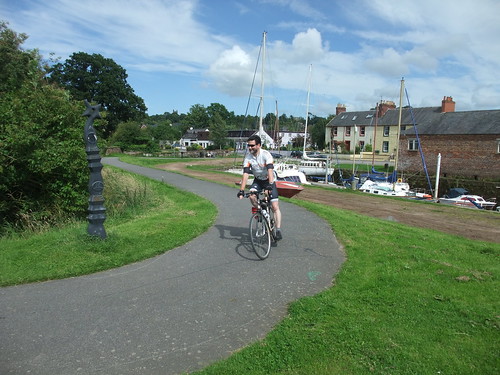 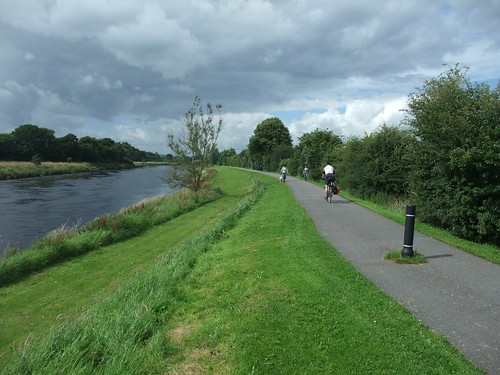 Once in the great metropolis, we looked for the café where we had agreed to meet the lovely Sally Hinchcliffe AKA Town Mouse, who is not nearly as disgruntled as she likes to make out (unless you leave a cheeky comment on her blog). The café in Dock Park would make an idea cycling café, if they went to the effort of adding some cycle parking.

It is one of the ironies of Dumfries and Dumfriesshire that with a little effort it could be a cycling paradise, if they invested in decent infrastructure and made it more welcoming. This is an economically fragile area which has great tourism potential but, they really are missing a trick. A recent European study found that cycle tourism is worth over €44 billion per annum. That is a very big cake, and it is growing. It is also one which Scotland should be trying to take a large slice of, an argument I am sure Cycling Dumfries is making to the powers that be on a regular basis.

After a wee infrastructure safari around Dumfries, looking at the bike hire scheme, some of the pedestrianised centre and some badly congested roads which could easily be sorted out by a Dutch traffic engineer, we could easily see what great potential Dumfries has. If only the town council could see it, Dumfries could be a true cycling town and a very much more pleasant place to live and visit. Interestingly, there are quite a few bike shops in Dumfries, which suggests that bicycle ownership is fairly high. As I was having a wee bit of bother with getting smooth changes on my rear gears, we were taken to probably Dumfries’s best bike shop: Kirkpatrick Cycles. New gear cable fitted, we wended our way home.

Friday: as this was our last full day for touring, we chose to have a relatively flat day, taking in Ae and Lochmaben. The day was punctuated with threats of rain, this never really came to anything (if you discount one short shower where we took cover beneath some trees for ten minutes). This however did offer the opportunity to take a dramatic landscape photo. 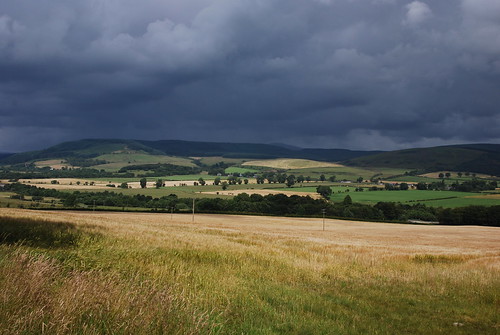 The Forest of Ae is a part of the 7stanes (a network of eight mountain biking centres in southern Scotland), and as such I had expected to find a café and shop. But no, the 7stanes website tells me that “Ae, Scotland’s shortest village name is only 20 minutes from the M74 motorway” and “No catering or bike hire available onsite until further notice. Nearby Dumfries has plenty of food and drink options” which says a lot about how this area is failing to capitalise on it cycle tourism potential, they don’t actually expect people to cycle there. Riding up to the village of Ae, there is a pub, but it is only open in the evenings, great.

So onwards, next stop the Barony Country Foods farm shop, or at least that was Ulli’s choice of next stop. However as the Carse of Ae is on a rather good downhill run, I shot straight past and didn’t stop until the road flattened out. Ulli wasn’t best pleased as we pedalled back up the hill. Shopping completed, we carried on to Lochmaben in search of a café for lunch. Fortunately there is a baker’s and café in the middle of the High Strett which served the purpose, sadly no cycle parking outside.

Lunch over, we headed off to see Lochmaben Castle which is now much ruined. It has had a long and turbulent history until the mid 17th century, by which time it had seen its last siege and was gradually abandoned. Originally build by the orders of Edward I of England in 1298, it should not to be confused with an earlier castle built by the Bruce family a short distance away, which is now one of the greens of a nearby golf course. This Lochmaben Castle consists of a few substantial ivy covered walls which could pass for a lost temple in a rain forest. To make sense of it, you really need to read the interpretation boards. 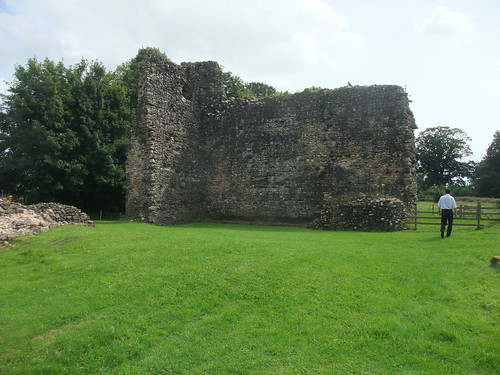 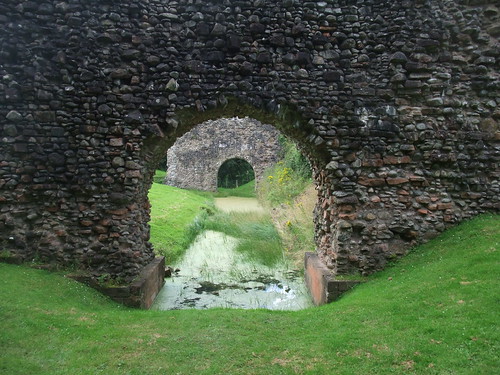 It changed hands throughout the wars of independence. At one time it was under the control of Archie the Grim, 3rd Earl of Douglas. Sometime later during a lull in the wars between England and Scotland, James IV stopped by for an evening of cards with Lord Dacre, Warden of the English March. According to the Lord Treasurer of Scotland, James lost 46s 8d that night. Another royal visitor was Mary Queen of Scots who slept there, well she did get around a lot. A relative of Mary’s, the Earl of Bothwell, captured the castle in 1592, after he entered disguised as a woman and left a door open for his followers. It also played a role in the bitter feud between the Johnstons and the Maxwells, as did most of Dumfriesshire. At some time after 1628 Lochmaben Castle fell into disrepair and stone was robbed out to build Annandale House on the High Street in Lochmaben.

Saturday: We had to be out of the cottage a couple hours before we were due to catch the train we had a reservation for, so we took the long way to the station. Due to a slight disagreement over route, it ended up shorter than intended, however this did mean that we had to fill in time by going to a bakery in Locherbie and putting more money into the Dumfriesshire economy.

One thought on “Down Dumfriesshire way (Part 2)”

The Value of Cycle Tourism in Scotland? £239m per year... And growing... https://transform.scot/what-we-do/research/the-value-of-cycle-tourism/

How much is the cycling industry worth? https://cyclingindustry.news/how-much-is-the-cycling-industry-worth/ A lot more than many people might think. Put it this way there is a static bicycle company that is worth more than Ford motor company...

You can see why Andy Cox is speaking at the @CyclingScotland online event next Thursday 5th November. For details of the event, on creating a safer environment for cycling and a greener future, and to attend for free, follow the link: http://orlo.uk/qAzNR https://twitter.com/AndyCoxDCS/status/1321808592270483456

The smart mobility innovation during the recovery won't be ride apps, hoverboards or flying cars, it’ll be building a city where you don’t need to drive in the first place. Talking with Michael @kimmelman about streets, transit and the 15-minute city.
https://open.spotify.com/episode/6rClzgtU2kUiESm53xNrUU?si=MD4qq0JaSkStFBYEqizq9g