Oh to being the highlands now that a temperature inversion has come! I woke this morning to hear the weather forecast talking about a temperature inversion in Aviemore. They reported that it was -1° C in Aviemore and 12° C at the weather station on the summit of Cairngorm, with a layer of cloud trapped in between. These are idea conditions for seeing a Brocken spectre! Unfortunately, I have things to do in Edinburgh and can’t just rush off to go Brocken spectre hunting.

Just in cast you are wondering what a Brocken spectre is I will give a quick explanation. A Brocken spectre or Brockengespenst, is a figure that appears out of the mist like a ghostly apparition, often with glowing halo-like rings around it head. It is fact your own shadow cast on to the near by clouds, the shadow seams to be magnified as you lack reference points to judge its size. The halo is caused by another optical illusion, a glory, where the sun is reflected by uniformly-sized water droplets in the cloud, which you are looking at, and diffracted light being reflecting back to you. This reflecting of diffracted light can only be seen from a narrow viewing angle, so generally you will only see the halo around your own shadow. If there is someone else standing near you, unless they are very close to you, you will see their shadow without a halo and your shadow with a halo. Likewise, they will see your shadow without a halo, but a halo round theirs, which just adds to the fun.

A few years ago, Ulli and I were lucky enough to anticipate a temperature inversion in the western Highlands on a weekend. So, we hired a car, booked a B&B and headed west for the weekend. We choose Ben Lomond as a likely place to spot a Brocken spectre that Saturday. When we set off from the loch side, the cloud was low and we couldn’t see the summit, we headed up the Ptarmigan Ridge, reasoning that this would give us a good angle to the sun as we climbed. It didn’t take long for us to enter the cloud and the loch was lost from sight. As we got higher, we started to come out of the cloud and we began to see our shadows as Brocken spectres, much photo taking ensued. 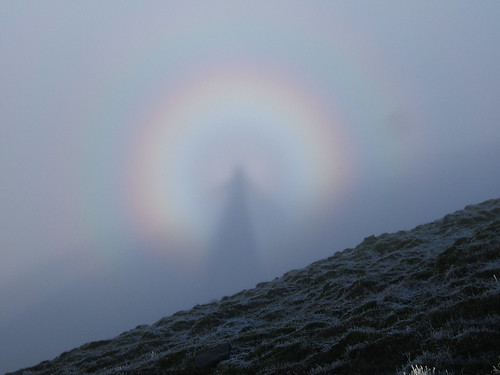 It was the photo above that led to my having a part in the a short film about The Big Grey Man of Ben MacDhui. In which I had to given an explanation of the Brocken spectre phonon, I would like to point out that I did so off the cuff without a script. The first, and so far, only time I have had to give a talk to camera like that.

Of course you don’t have to go all the way to the highlands in order to see a Brocken spectre. On days when the haar rolls in from the Forth, you can see Brocken spectres while standing atop of Arthur’s Seat in Edinburgh, as famously described in James Hogg’s novel The Private Memoirs and Confessions of a Justified Sinner. Where ever you go to spot your Brocken spectre, it is well worth going out looking for one when the conditions are right!

One thought on “Dreaming of Brocken spectre spotting”

Tomorrow, June 3rd, is a special day. It's Martyrs' day & a public holiday here. It's also the World Bicycle Day: the day the cycling world celebrates the bicycle! Please task your government to develop and implement cycling friendly plans. I wish you a happy day, tomorrow. 🚴‍♀️🚴‍♀️

Feeling helpless, but have at least donated some cash to Black Lives Matter.

With the approval of @NicolaSturgeon & after discussion with colleagues, I’m with a small group of @theSNP MPs who’ve been compelled to travel to Westminster today to argue against the disenfranchising of MPs who can’t be here for #COVID19 related reasons

Will the Coronavirus lead to an increase in cycling in Scotland? https://www.scotsman.com/lifestyle/outdoors/will-coronavirus-lead-increase-cycling-scotland-2867750 It is a genie which a lot of motoring groups would like to shove back into the bottle...