June is possibly one of my favourite months to be in Edinburgh, it is that period between the students leaving and the tourists arriving en masse. The city is quiet, it’s just the locals, the long term residents, who are in the city. We who actually live here have our city to ourselves for a short while.

As I write today, the sky is blue and the sun is shining, but the weather in June is not always so kind. A few days ago it was decidedly dreich, not for nothing has Edinburgh been described as the Reykjavík of the south, we are on the edge of the sub Arctic here. Another effect of this is the length of the day, visitors from the middle latitudes are surprised to find that it is still light at 10:30 at night. We are not so far north though that there is enough light to read by at midnight without turning the lights on (I have experienced this in Norway). At this time of year the nights are short, and so birds start singing early. It reminds me of my student days, wandering home as the birds are starting to sing.

Although the tourist masses have yet to arrive, that doesn’t mean that there is nothing going on in Edinburgh in June. There is the Edinburgh International Film Festival, although this is a shadow of its former self and no longer attracts the big stars that it once did. There is the Meadows Festival, the Royal Highland Show, which in spite of its name is actually held at Ingliston out by the airport, and a number of other events.

Then there are those quintessentially Edinburgh things, such as a group of archers doing a spot of target practice in the middle of a public park, because that is what they have always done since 1676. Health and Safety be hanged, it is important you know, without this essential target practice, how can they be expected to guard the monarch when she visits Scotland, if they don’t practice?

If you want to eat out in Edinburgh in June, book early, as the Graduation season has moved (in my day it was in July). The new graduates of Edinburgh’s four universities and their (rightly) proud parents, dine out in the better restaurants across the city, but worry not, there are plenty of good places to eat in Edinburgh.

Another feature of Edinburgh in early summer is the rash of For Sale and To Let signs that appear across the city. This usually starts in May, with a sudden rush of For Sale boards (although in recent years it has been less pronounced) and is followed by the To Let signs in June, as the students end their studies and exit the city. For savvy students looking to rent (or their parents looking to buy), this is the time to find the good flats. The ones with easy access to their chosen university and/or the fleshpots of the city centre.

The denizens of this southern Reykjavík are always ready to celebrate the appearance of the sun. This is done by heading to the parks and open green spaces to show copious quantities of white flesh to the sky in the hope of frightening the sun away. Should this tactic fail, they resort lighting fires to sacrifice burnt offerings to the gods of rain. This tactic usually works. 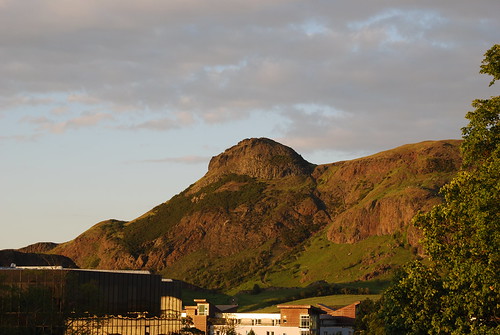 Arthur’s Seat on an evening in June.

Life in Edinburgh is never dull, however, June is rather more laid back.

It's rumoured that Dominic Cummings will sack Liz Truss soon because she wrote a letter about the actual challenges of Brexit. She should have learned the lesson from my dismissal, you can't talk about things that are real.

These are the people are conveniently forgotten about in discussions about the "cashless society".

👨‍👨‍👦‍👦Are you thinking about ditching your family car? Be a role model for your children and give #CargoBikes a try!

🚵The next @CycleLogistics webinar will explore why every family should rethink their choice of transport.

I’ve seen a glimpse of 2024, post-COVID and face coverings are still being debated in the UK. #marr Scotland has just made them mandatory in shops & public transport & compliance seems good. Enough circular debates on what to do & more focus on implementation & logistics.