The plan was simple, ride out to Gifford, have lunch, pootle around East Lothian for a bit and take some photos before going home again. Well, that was the plan. It was one of those autumnal days when the air was clear and the sun bright, so I packed my big camera in a pannier and we set off, heading out through Holyrood Park, with the intention of picking up the Innocent path below the tunnel. Arriving at the park, we found there were lots of people running along the roads. Although the roads are normally closed on a Sunday, there aren’t usually this many runners around, nor are they usually as muddy as this lot were. We noticed a sign proclaiming “Survival of the Fittest” and realised this was some sort of race, also they were being directed down the path towards the Innocent tunnel. At this point we decided to carry on to Duddingston instead and join the Innocent Path and the NCN 1 after that. So far so good.

At Brunstane we had the absurdity of having to carry the bikes over the footbridge to cross the railway line. This always grates, it is typical of the couldn’t care less attitude of British transport planners. This bridge could easily be made accessible to wheelchair users, parents with pushchairs and cyclists with a little thought, but no, just put up something that is inadequate and tell people to make do. Certainly in the past, the same attitude has been shown by Sustrans, describing this as part of a Traffic Free route and the National Cycle Network. Why do we have to put up with second rate crap? For that matter why does Sustrans think this is suitable for an international long distance cycle route? Rant over*.

We departed the NCN1 at Whitecraig, and where we headed towards Smeaton Shaw, when we had to stop to investigate a strange rattling coming from the back of Ulli’s bike. It turned out to be a loose cable from her rear light, cable tided away we carried on. We had not gone much further, to the turn off onto the old railway line to Ormiston, when I noticed a strange rattling coming from the back of my bike. On stopping to investigate, I found this to be rather more serious. One of the bolts attaching the pannier rack to my bike was hanging loose and the spacer between it and the frame was missing (as I now have disk brakes, there has to be a spacer to stop the rack from pressing on the calliper and applying the brake). Fortunately we only had one pannier each, so I could swap mine onto Ulli’s bike. However I was reluctant to go on, as I was worried about the bolt shaking loose and being lost, so we decided to head home again.

On reaching the Esk, the bolt was still holding firm and Ulli suggested that we head to Musselburgh for lunch instead. We followed the path down the Esk to the town, but couldn’t find anywhere that looked interesting to eat. Rather than retrace our route, we headed west along the coast to Portobello. So it was that for a second weekend in a row we found ourselves on Porty Prom, this time I decided to get the camera out and take a few photos: 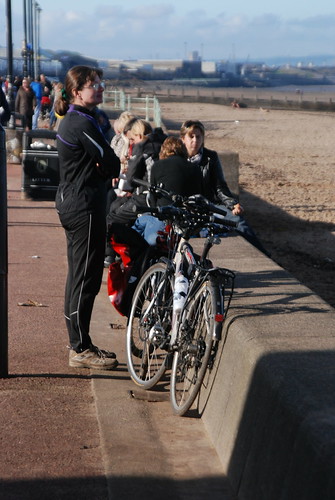 Looking across the Forth. 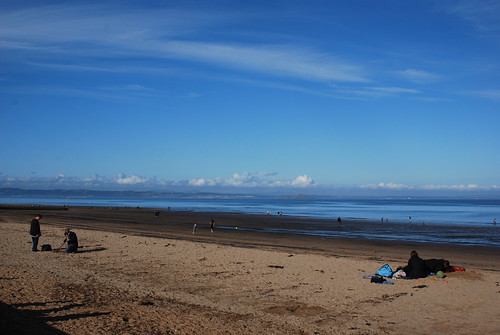 Porty beach on an autumnal day. 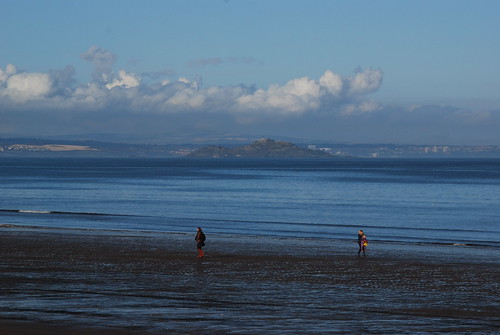 The tide was out, people were wandering about… 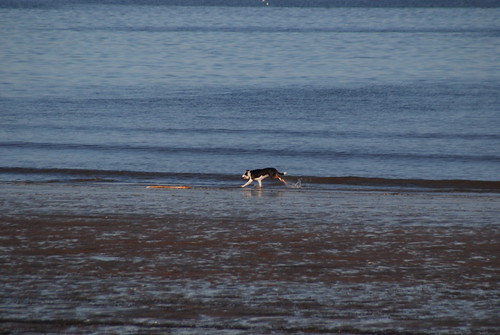 … and a dog was fetching a stick.

There were some odd looking vessels out the Forth. 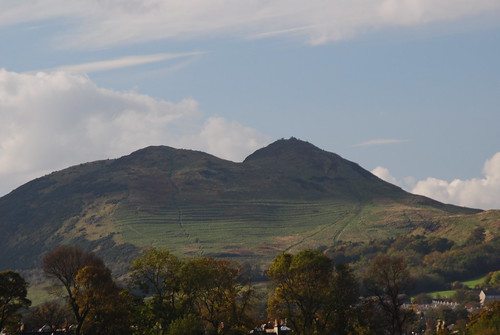 Then, on the way home we took in the view of Arthur’s Seat from the other side, the low angle of the sun showing up the prehistoric cultivation terraces.

The morale of the story, it is always worth carrying a camera…

* I have now been told that there is a way round without going over the bridge.