Having arrived early in Blackwaterfoot on the first day of our circumnavigatory tour of the Isle of Arran, we dispatched three ice creams (one each, I hasten to add). Then we (Ulli, Bernhard and myself) took the opportunity to leave out panniers at the B&B and head out to explore the famous standing stones at Machrie Moor. Given that it was only mid afternoon, the sun was still high, and we wanted to take photos when we got there, we took the longer way round. Instead of heading directly out to Machrie itself, we took a loop round it, so that we would be arriving when the light would be at its best.

So from Blackwaterfoot we headed up the String Road through Shiskine. The String Road cuts across the island and provides the access from the south west of the island to Brodick and the ferry, consequently is much used by tourists rushing to catch the ferry, which probably explains why it was on this road we had more problems with bad driving (and there were only few) than anywhere else on the island. For the most part the drivers were very good, the islanders themselves are very patient with cyclists and can follow you for a mile or more without trying to overtake. Indeed some won’t overtake until you wave them past, a novel experience for an urban cycle commuter.

Having passed through Shiskine, a quiet linear village, we found ourselves cycling past small farms on improved ground to the left and rising hill ground to the right, the road only rising gently. This would have been easy going if it had not been for a strengthening wind which took its toll on our tired legs, but was fun nonetheless. About 2.5 miles (4 Km) out of Shiskine we turned left onto the road leading to Machrie and crossed Machrie Water. With the wind finally behind us and just when the road was looking good, there was a sign saying ramp and a metre wide chunk cut neatly out of the tarmac, evidently some form of road repair is in progress. The first one took me by surprise, I managed to jump the bike up to avoid the worst of the impact, but judging by the noises from behind me the others were not so lucky. The next bit of fun came in the form of a cattle grid, now the trick with cattle grids is to keep the speed up and cross at right angles to the bars, which takes a wee bit of confidence, but isn’t too difficult. Faster is more comfortable but requires more confidence, and whatever you do, don’t brake or even think of turning the handle bars…

There was another cattle grid just before the golf course. Having safely crossed it, the sight of the sea told us that we were nearing the end of the road. We turned left again and headed back in the direction of Blackwaterfoot. Having re-crossed the Machrie Water, we started to look for the gateway on the left which gives access to the Stones. Cars are made to park on the far side of the road a little way back, but there is space to leave bikes at the entrance. There is a sign saying “no bikes”, no matter it is a pleasant enough walk. On the way in we heard our first Cuckoo (Cuculus canorus) of the year, yes spring is definitely here.

If you have not been, it is best to arrive with no expectations, that way it is all the more surprising and enchanting when you do go there. So if you have not been there yet and are planning to go soon, stop reading now.

As you follow down the track towards Moss Farm, now a ruin, the first sign of ancient activity you come across is a Neolithic chambered cairn surrounded by a ring of stumpy Bronze Age stones, interesting but, to be honest, not hugely exciting. If this is your first visit, you start to wonder if it was really worth walking a mile for. But if you walk on round a corner, you see the ruins of Moss Farm and just beyond a few big beech trees the first large standing stones. As you walk further in, more and more stones seem to pop up out of the landscape and you notice that there are standing stones and stone circles all around. The landscape has a magical quality to it, these stones where set up during the Bronze Age, somewhere between 1800 to 1600 BC, before the surrounding blanket bogs had even started to form. The chambered cairn which you have already passed is even older, and you start to wonder how much more there is buried under the peat.

Photos taken and the site explored, the cooling breeze persuaded us that it was time to head back to the bikes, well that and the thought of dinner. The two and a bit mile ride back to Blackwaterfoot was fairly straightforward, apart from nearly being taken out by a bunch of local teenagers in a beat-up old car but ho-hum that sort of thing can happen anywhere. 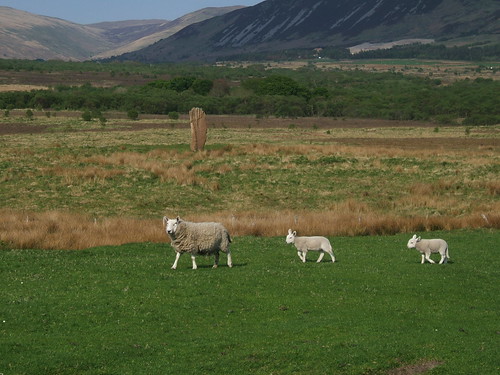 A view of one of the stones and some sheep. According to legend, the giant Fingal (Finn MacCumhail) tethered his dog Bran to this stone while he had dinner here one evening. If you look really carefully you will see there are more stones…

No-Deal Brexit May Be the Trigger for Bank of England to Use Negative Rates https://www.bloomberg.com/news/articles/2020-09-18/no-deal-brexit-may-be-the-trigger-for-boe-s-journey-below-zero Which will mean the very rich get richer at a cost to the rest of us...

Women from all over the world will go on colourful and empowering bike rides this Sunday. Join in:

1 Plan a short cycling route in your city, invite a couple of friends
2 Wear something fancy/fun
3 Ride, laugh, capture your moments with photos/videos!

In excess of £5bn in arms and training sold to Saudi Arabia to do this to Yemen, with @JamesCleverly's @Conservatives the only UK political party consistently opposing a ban.