Among my Christmas presents was a VDO Cytec C4 cycle computer, which I fitted to my bike as soon as I got home. However the weather was so inclement that taking it out for a satisfyingly long test ride was out of the question, until today.

The gales that have been battering Edinburgh and caused the cancellation of the Hogmanay street party have, at least temporarily, ceased. So as the 2nd January is still a holiday in Scotland, Ulli and I set out for a wee jaunt to Fife and back, not a huge distance but fine for a winter afternoon.

It was a fine ride along the No. 1 Cycle Route (this is an odd thing the No. 1 is supposed to be the Atlantic Coast Route: North Cape to Sagres, but for some reason it includes a route from Edinburgh to Inverness which is really the part of the No. 12 North Sea Circular Route, is designated as the No.1 (see ECF website for details) but I digress), the effects of the gales were clear to be seen with bits of shredded trees littering the path, which slowed things down a wee bit. As did the fact this was the longest cycle Ulli had undertake in sometime, probably since mountain biking in the Alps in September/October. All the other cyclists we met were really friendly with a nod, a smile or a greeting from most.

On the Fife side of the Forth road bridge we stopped so that Ulli could take another ‘intrepid cyclist’ photo of me, see below. 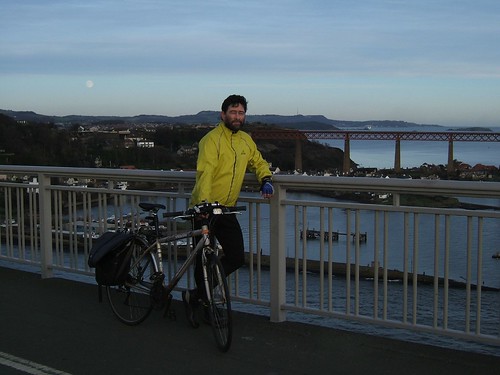 Stats from the new toy:

@Telegraph 27 April: "The PM returned to Downing St on Sunday night to take full-time control of the coronavirus crisis" https://www.telegraph.co.uk/news/2020/04/27/boris-johnson-coronavirus-news-work/

@Telegraph Somebody reminded Boris Johnson of his own words on the steps of downing street did they?

@Telegraph so an open admission that he's done nothing apart from push #Brexit since becoming PM then.

If Johnson is now to take "direct control" of the Government's handling of the coronavirus crisis, it begs the question, who was in charge until now? Isn't that part of the PM's role?