This September Ulli and I took a well deserved holiday on the mainland of Europe. We took up the invitation to visit France, Germany, Switzerland and Austria. Here are a few things I noticed on my travels. First off, arriving at EuroAirport (Basel Mulhouse Freiburg), you clear passport control to enter the Schengen area, collect you bags and then have a choice of two exits through customs, you can either clear Swiss customs or EU customs to enter France/Germany. The airport consists of two separate parts, a French part and a Swiss part, and you can pass between the two parts without a ticket (but you must carry a passport or ID card, in case you are asked to show it). This caused us some confusion as we weren’t sure which side our host was waiting for us, also we didn’t know at that time you could just walk across the border within the airport.

Having exited into the Eurozone, we wandered out into the late summer heat of the Alsace, looking at views across the Black Forest to the northeast (more of which later). We were staying in a small French village with views (on a clear day) to the high mountains of the Bernese Alps halfway across Switzerland, ~140 Km away. 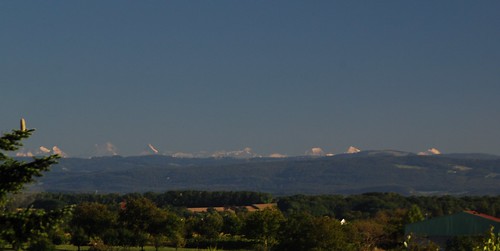 Driving though small French towns to get there, I noticed there were zebra crossings everywhere, they seemed to be every 100m. Also where there were cycle lanes, they were separated from motor traffic with just solid lines, nowhere did I see a car parked on a cycle lane, or for that matter on the pavement (Footway).

Although we were staying in France, we spent most of our days out in Germany, visiting Staufen im Breisgau whose most famous resident was one Dr Faust who died there in 1539, having allegedly sold his soul to the Devil. The other thing the town is famous for is geothermal drilling controversy. Back in 2007 there was a plan to utilise geothermal energy from the depth of the Rhine valley for heating and cooling purposes. However, things didn’t work out as planned, in 2008 it was noticed that the centre of the town had sunk by about 8mm. This is thought to have been caused by disruption of the water table, as a result drilling was stopped. But this wasn’t the end of the story. In 2009 it was noticed that parts of the town had started to rise and by September 2010 some parts of the town had risen by up to 30cm. This uplift has been caused by water seeping into a layer of anhydrite, so causing it to convert into gypsum which swells when wetted. All the geological activities have caused massive cracks to appear in many of the buildings, some of which now have stickers which read “Staufen must not break”. 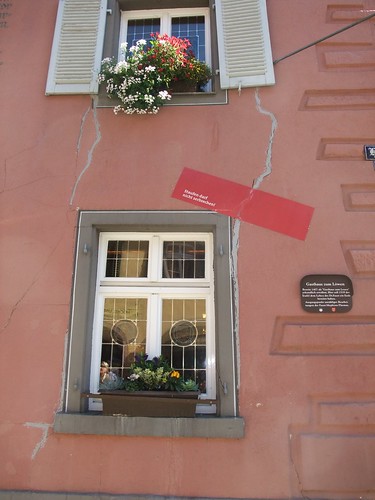 There is also a ruined castle on hill above Staufen which was burned down by the Swedish army in 1632 during the 30 years war. These days it is a pleasant to walk up to the castle though the vineyards. 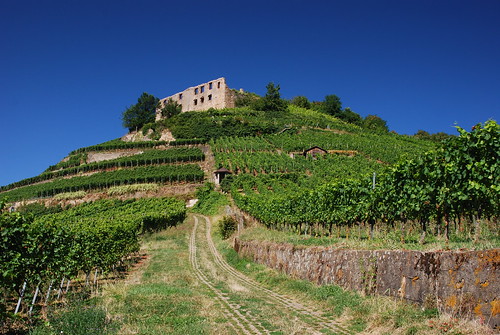 The following day we went for a walk in a range of hills called the Kaiserstuhl (literally: “Emperor’s Chair”) in Baden-Württemberg in southwest Germany, but I think that deserves another blog post. After our walk we visited Freiburg, which gave me more opportunities to observe the urban environment and particularly the cycling infrastructure. Freiburg is a cycling city. That said, the first thing that caught my eye after we left the underground car park next to the station was the display of air pollution data. 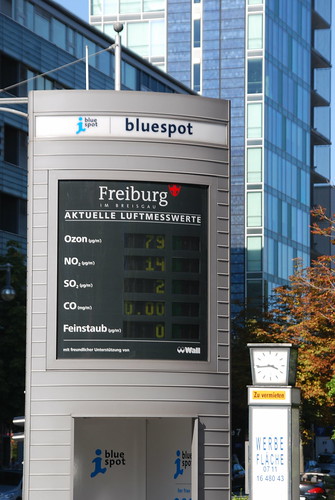 Coming from a country where the powers that be prefer to ignore the issue of air pollution rather than facing up to it and taking real action to tackle the problem, this openness is surprising. But then maybe there is a reason, back in the 1980’s people started to notice that large numbers of trees in the Black Forest were dying. People started to put a visit to the Black Forest on their bucket list, to see the Black Forest before it died. The Black Forest wasn’t the only forest to suffer such damage but it was the most iconic, seeing so many trees in so much trouble caused waves of protest across Europe which resulted in EU directives to reduce air pollution. As a result the levels of long range pollutants were massively reduced and the Black Forest recovered. . Of course it isn’t just trees that are damaged by exposure to air pollution, people are, too, and local air pollution in cities can be very damaging. Maybe it was the experience of seeing the Black Forest dying that has made the people of Freiburg more aware of the issue of air pollution. Certainly they have chosen to do something about it, there is an extensive tram network in the city (powered by renewable energy) and active travel is encouraged, this is, as I have already said, a cycling city.

In the UK we are told that our roads are too narrow to accommodate separate space for cycling, here they just take the space away from the more polluting means of transport. It works! 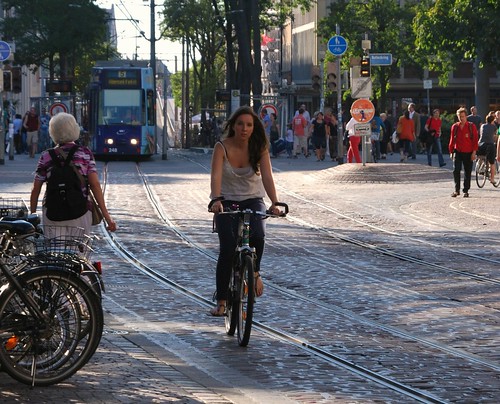 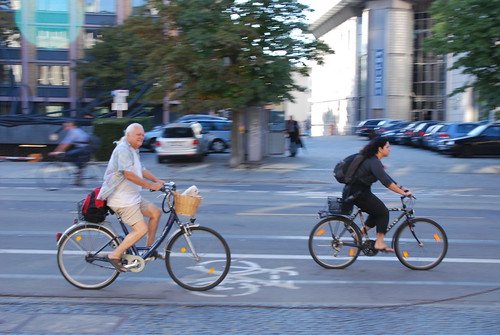 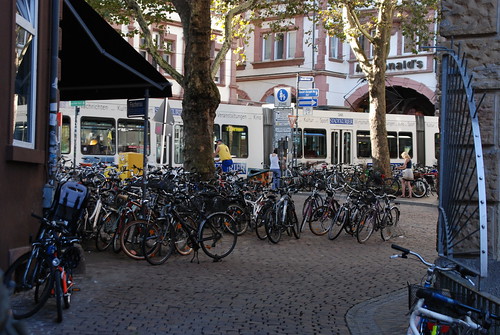 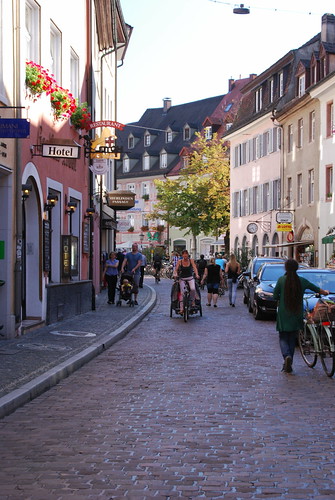 It’s not just in the city that you see lots of people on bicycles, you see them up in the mountains of the Black Forest, too, although the older folk sometimes need some extra assistance.

Following our trips to the Black Forest, we set off on the next stage of our tour, moving to the Austrian end of The Bodensee (or Loch Constance as we took to calling it). We were based in Lochau for a few days, the original plan had been to head off and cycle all the way around Bodensee. However we found we didn’t have the time to go all the way round (as we had been warned not to try it on a weekend because the paths get very busy), so we just went part way and took a ferry as a short cut. I think to do this ride justice, it needs to have a blog post of its own. Needless to say, cycling through three countries in one day (or rather half a day) was easy, as the infrastructure was seamless and the signage easy to follow.

A trip across the Arlberg (a famous pass) showed that going up hill was considered no barrier to cycling either, no matter what your age. Ten years ago, Vorarlberg was the federal state (Land) which had the highest cycling modal share in Austria. Since then, it has been overtaken by the states of Tirol and Salzburg, partly as these states have latched on to the economic benefits of getting people to ride bicycles for transport and/or leisure.

The next stop on our multi centre holiday (I mean tour) was the Tirol (or Tyrol if you insist). To get there we took the scenic route over the Arlberg pass rather than taking the tunnel. After all, once you have seen the inside of one alpine tunnel, you have seen them all, and the Arlberg tunnel is 14 Km (9 miles) long which is rather dull. You miss out on the views from the top and the chance to look for blaeberries (Vaccinium myrtilis) which are also called Arlenbushes, and there is a theory that the pass thought the mountains is named after them.

Of course, those who chose to travel by bicycle, have either to cycle over the pass or take the train, as they are not allowed to use the Arlberg tunnel (not that you’d want to). We passed a dozen or so cyclists on the way up the 1,793 m pass, even though it was mid September, outwith the main tourist season.

Having arrived in the Tirol, the weather then proceeded to change which rather limited our opportunities for more cycle trips (lack of mudguards). However, we did manage to get a couple in, including one from Ötztal to Absam along part of the Inn Radwag (the Inn cycle route), but I think that is also best covered in a blog post of its own, as this one is getting rather long.

A few final observations, in all four of the countries we visited, the bicycle was used by all sections of society as a way of getting about. Cycling on the mainland of Europe is normal, most people don’t wear helmets, I don’t think I saw a single child wearing a helmet. Most of those who were wearing helmets were adults engaged in serious sports, also the Austrian mountain bikers only wear their helmets for going down hill, when riding up hill or along the roads their helmet is mounted on the handle bars.

During the three weeks we were away, we crossed international borders over 20 times, although we carried our passports with us, we were only required to show them when entering the Schengen area at EuroAirport, and when leaving it again from Munich Airport and to get back into Scotland at Edinburgh Airport.

@TimMcKenna5 @kim_harding I had a good laugh at this one 😂 as I was so hopeful for a great year. But it does remind me that optimism and humour is so important for our wellbeing.

Dutch transport minister:
'Stop all micromobility innovations. Safety above everything. Caution needs to prevail over speed and innovation.'

2020 just keeps on delivering. But it feels like one of the later seasons where they get a team of new writers who don't really want to follow the narrative arc of previous seasons so throw in some random plot points which jump the shark. https://twitter.com/Scriblit/status/1318523884308660225

Hi @lmacinnessnp Do you know if the Transport and Environment Committee happens to have more up-to-date figures for the below, or how I'd go about getting them? Would this be done via a freedom of information request to @EdinburghPolice ?
Source: https://democracy.edinburgh.gov.uk/Data/Transport%20and%20Environment%20Committee/20140114/Agenda/transport_and_environment_committee_-_140114_-_part_1_-_items_41_to_710.pdf (p 180)