Edinburgh is currently in the process of getting a new tram system, this has not been without controversy, not least the issue of cycling and tram tracks. The early threat to the off road cycle network, the removal of on road cycle lanes and would bicycle be allowed on the trams, were a few of the issues. Fortunately the plan to replace an off road cycle track with the tram was dropped before work started. Also the tram company, TIE, offer to carry bikes on the trams, not something which was in great demand among Edinburgh’s cycling community. Most of us are quite happy to ride our bikes to where we want to get to, if we allowed to. This is just as well as the City of Edinburgh Council has signed the Charter of Brussels committing it’s self “To set a target of at least 15% for the share of cycling in the modal split of trips for the year 2020 and of further growth if this target already is achieved.” The greatest problem appearers to be a lack of thinking about how integrate the new tram system into the existing transport network, rather than just adding to it and expecting it all to work together without any further planning.

The first street in Edinburgh where tracks have been laid for the new tram network is Princes Street. So when Princes Street re-opened two weeks ago, there was great interest in seeing how the new mix of trams, buses, cycles and taxis would work (cars are not allowed on most of Princes Street). OK, so there are no trams yet, they won’t actually arrive for another year, which is just as well, as there are things which need to be sorted out before they do. As soon as Princes Street reopened, people went to see what it was like and took the opportunity to cycle along it for the first time in a year. Almost straight away, there were reports of strange signs, a lack of cycle facilities and accidents. It was this sudden spate of accidents that prompted TIE to act and offer training to Edinburgh’s cyclists.

Now, I am all in favour of training , especially when there is someone to pay for it, and so it was that I found myself on a Sunday morning on Princes Street with a couple of colleagues from the Bike Station, giving advice to cyclists on how to cross the tramlines. I was stationed at the west end, where there was a section of the street which was conveniently blocked off. When we first arrived, we looked for a place to lay out cones and noticed there was ice everywhere, as the sectioned off area had not been gritted. There was no one from TIE around to ask about getting some grit put down, so we were left with having to tell people to watch out for ice (until it melted away around midday). However, this still allowed us to explain the principles of how to cross the rails safely to the cyclists and give them opportunity to practice in a traffic free environment. 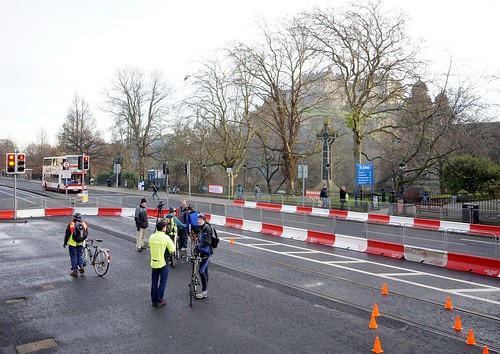 The important things to remember when crossing tramlines on two wheels are:

Having had this practice, they were then offered the opportunity to ride along Princes Street, accompanied by one of my instructing colleagues. 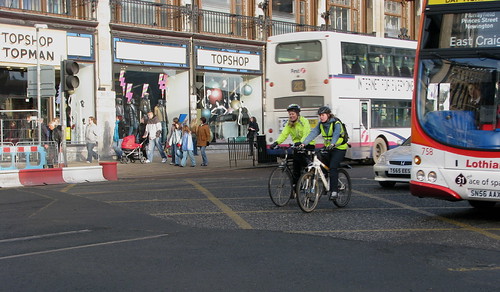 Overall the training session was a success, with everybody who took part saying that they felt more confident about cycling with the tramlines.

For me, the one downer of the day came when I was cycling back along Princes Street. I had moved across between the tramlines to pass a bus, wanted to cross back again and checked to see that I was well past the bus before starting to cross the rail. I turned to cross the rail at a 45°, but without thinking, I took another look back, and my rear wheel slipped and down I went.

This evening I was talking to my mother on the phone and telling her what I had been doing. She then told me about cycling in the city when she was young, before they removed the old tram tracks. She said the worst thing was going downhill, getting a wheel stuck in the tracks and going over the handle bars. When I said I had come off, she commented “well at least you weren’t wearing a skirt”.

5 thoughts on “Of tram tracks and cyclists”

A civil suit against Donald Trump & #JeffreyEpstein alleging they raped a 13-year-old girl was dismissed in California in May 2016, refiled in New York in June 2016, and dropped again in November 2016.
@realDonaldTrump #DonaldTrump
https://www.snopes.com/news/2016/06/23/donald-trump-rape-lawsuit/

A petition to keep cycle lanes, set up as a temporary measure during covid, permanently.
Great idea and much needed for #BuildBackBetter #GreenRecovery https://twitter.com/GreenRupertRead/status/1279659149509476352

There's no actual 'culture war', is there? It's just a new way of describing disagreements between people who hate racism & discrimination & people who love it. Meanwhile, 'woke' has just replaced 'politically correct' as the most pretentious way of saying 'not a massive bigot'.