Some time ago I wrote about how Ulli and I planned to buy a Persian carpet. Well now finally after three years of waiting, things are finally starting to work out the way we hoped. So it was time to buy that Persian carpet which I had promised Ulli. First, we had to find the shop. We had first thought about getting such a carpet when we came across Isfahan Carpets in that (formerly) great Edinburgh institution, Jenners. However, since that time Jenners has sadly gone downhill and no longer stocks high quality genuine Persian carpets from Iran. Fortunately we were able to find from Isfahan Carpets’ web site that they have moved to an industrial estate in Broxburn.

At first this didn’t look too good, how to get to Broxburn without a car? Well it is possible to cycle there from Edinburgh by following the Union Canal, but cycling home carrying said carpet was not appealing. So how about a bus? A quick look at Google Earth (see here) showed that there was a bus stop just a few minutes’ walk away. A quick search for buses going from Edinburgh to Broxburn showed that First Bus operates two routes, the number 12 and 16, which between them provide a 15 minute service Monday to Saturday, and half hourly on Sunday (the 16 doesn’t run on Sundays), from Princes Street.

Having found our way out there, we were warmly welcomed by Caroline Allan, who gave us a cup of tea and showed us a large pile of carpets which were on sale. For more that ½ an hour we sorted through the pile, picking out a shortlist of our seven favourite rugs. Caroline then came back to us and told us something about each of the carpets we had selected. Mostly we had selected Kashgai tribal pieces from the South West of Iran. While many of the Kashgai (or Qashqai) are now settled, these carpets where made by people who still migrate with their flocks between summer pastures in the Zagros mountains and lower winter pastures to the north of Shiraz (where the well known grape variety comes from, aka Syrah). She also pointed out the abrash, the colour variation which comes from the wool being dyed at different times as it is needed. They don’t have batch numbers and it is this variation which gives the carpets their great individuality and charm. She told us about the motifs incorporated into the designs. The flower and plant motifs represent rich fertile pastures and successful flocks, a symbol of wealth. Some carpets also showed ancient fertility symbols, some of which came to have a very different meaning in the 20th, century western mind, and the meaning of others has been lost with time.

Caroline told us how the designs change with different stages in the lives of the women who weave them. The dowry carpets are woven to impress the father in-laws with their skills at weaving and dyeing, and tend to contain lots of colours. The mid-life carpets are made to fill out the tent as the family (and the tents) get bigger. In families where there are more boys than girls, this turnover is much slower as it is only the women folk who weave carpets. Then there are carpets woven during later life, these are characterised by their highly intricate patterns as they are made by ladies with long experience of weaving as well as more time available to them and the patience to make them. There are the children’s carpets which are made to celebrate the birth of a child, for some reason these often feature a lion with a rather flattened face which makes them look friendly and would look great on the floor of any nursery.

Over the space of another hour and a half, and another cup of tea, we slowly whittled down the selection from seven to one. Deciding between the last three was the hardest part, all of the carpets which we had looked at where inwith our predetermined size range (it is important to realise before setting out to buy, that you are not going to find the exact size of carpet you looking for, and that you therefore need to decide rough maximum and minimum dimensions for the carpet you are looking for) and below the budget ceiling which I had decided (although I probably could have been persuaded to go higher if needed). Sadly things aren’t going well enough for me to be able to offer to double the budget, so that we could buy two, although I was tempted to do so.

We finally chose a Kashgai mid-life carpet which had been woven over the course of several seasons, you can see in it the points at which the tension had been taken off the loom as the family moved between their summer and winter pastures. It was used by the weavers family for about 35 years before they tired of it, wove a new replacement and sold the old one on. After it had been bought by Isfahan Carpets, it was taken to a carpet washing “factory” to the south of Tehran, where it was given a heavy duty wash and brush up, before being dried in the baking sun. Now, in the weaker sun of the Scottish winter, the colours are still rich and vibrant, the carpet is a thing of beauty and a delight to us.

As Sir David Attenborough wrote of Kashgai weaving: “Their abiding appeal rests on these qualities which were so treasured by their anonymous creator – a pride in craftsmanship, a joy in pattern and invention, and an unquenchable delight I colour.” 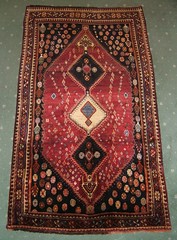 It cold out there, so much so that this bumble bee has hardly moved in the last 5 minutes, which makes talking photo easier

In this Age of Untruth, BBC Journalists Are Being Taken for a Ride https://bylinetimes.com/2020/05/28/in-this-age-of-untruth-bbc-journalists-are-being-taken-for-a-ride/ Former BBC producer Patrick Howse considers the different approaches of Laura Kuenssberg and Emily Maitlis and what this tells us about the state of the public service broadcaster

Our #RieseAndMuller #electriccargobike has been busy, thanks to the heroes at @streetwork @SimonCommScot who have been delivering food donations to the homeless. If you see it out and about, the cyclist deserves a thank you! #GiveHope #covidheroes

Jeez, no. At the very least any scrappage scheme should only be for electric cars, but adding in e-bikes on an equal footing would be pretty awesome. https://twitter.com/Green_NewDealUK/status/1268085342063689728