Following my letter to Marco Biagi sent by e-mail (sent via WriteToThem.com) on the 2nd November 2011, I have now received this reply, which I give below.

Spokes was kind enough to publish my original reply of 12 October to the many campaign emails I have received on this topic from Spokes members (http://www.spokes.org.uk/wordpress/wp-content/uploads/2011/10/1110-G-Raab-ANON-to-Marco-Biagi.pdf). In that I undertook to investigate further, and I have been doing so. I am however happy to reiterate the points made in the original email [to the SPOKES cycle campaign 12th October 2011].

The SNP manifesto promised to “increase the proportion of transport spending on… active and sustainable travel.” This includes more than cycling and walking, such as the Green Bus Fund, to which I referred previously. There is no basis to suggest that will decrease with the current levels of information on how much will go to active and sustainable travel from the £50m Future Transport Fund. It may also be that the proportion is being calculated over the three years of the spending review. It is therefore simply wrong to accuse the Scottish Government – or indeed, individual MSPs since we stood on that manifesto – of ‘reneging on promises’ without more clarity. I am still attempting both to secure information on this from the Scottish Government and to emphasise the importance of active and sustainable travel personally upon Ministers.

On checking the Scottish Government budget I found that what was described in your email and by Spokes as a dramatic increase in spending on trunk roads and motorways does is mainly made up of the Forth Replacement Crossing, an increase in winter preparedness funding and the ever-rising bill from Private Finance Initiative contracts signed by the pre-2007 Scottish administration. I do not therefore think it is a useful comparison. 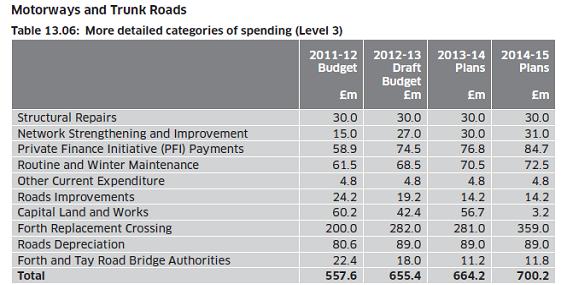 There is a very broad – though I appreciate not unanimous – agreement that the FRC is necessary. We can however all recognise that this is a single, one-off project. As this is such a distinct and one-off project I would argue that it deserves its own budget line rather than being brought in to a recurrent line such as Motorways & Trunk Roads.

I’m afraid we also disagree on the role of local government. As I pointed out in the first email, Scotland’s local authorities are currently responsible for local roads, pavements and cyclepaths. They contribute to attaining national objectives through the generous funding they receive in their annual grant. This core funding next year will total £10.02bn. They are already expected to meet ambitious national expectations using this funding in schooling, child protection, homelessness, waste management and a whole range of critical areas. If the people of Scotland do not think they are doing an adequate job of this they are entirely entitled to vote their local councillors out. My intention to engage with the City of Edinburgh Council on their local delivery, which I referred to in my original email, was based on this recognition of the state of affairs and my desire to live in a more sustainable city. It was in no way ‘cheeky’ as Spokes have suggested. Indeed, Transform Scotland’s ‘Civilising the Streets’ report from June 2010 highlighted both Stockholm and Freiburg as examples of good practice of substantial increases in cycling, and in both cases singled out strong local government leadership as crucial to this goal. Edinburgh has tremendous potential for increasing cycle uptake and I would hope to see this city become a similar example of good practice for other cities to look at and emulate.

While I welcome Marco’s desire “to see a healthy, active and sustainable Scotland”, I find his commitment to achieving this rather less convincing. The logic of his arguments given above is rather weak and to off load the responsibility of meeting targets set by the Scottish Government on to local government without providing the additional funding to achieve these targets rather feeble. It also sends out the wrong signal, that because we are now suffering the effects of past short sighted transport nothing can be done to give us a better future. If fail to learn the lessons of the past, we are doomed to repeat the a same mistakes.

One thought on “Reply from Marco Biagi MSP”

Why do the British hate the idea of giving children freedom? Why can't we have this everywhere? Why do selfish adults in cars hate children?

There are some extraordinary findings in this thread, Airbnb is having a deeply corrosive effect on the city

Public health experts in Britain feeling the same. At least those of us who have pushed for ‘Zero COVID’ did everything we could to push the evidence & data to No.10. Doesn’t make it easier to sleep at night, knowing what’s to come. https://twitter.com/theatlantic/status/1281444385645789184

Do pollinators prefer pesticide‐free plants? An experimental test with monarchs and milkweeds https://besjournals.onlinelibrary.wiley.com/doi/abs/10.1111/1365-2664.13711