On Saturday we went out for a short ride, as you do. We decided to check out some quiet back roads and off road routes. We got as far as the Inch Community Centre, following the road through the park looking out for its speed ramps, there to slow down motorised traffic. Only I failed to see one: it being a bright sunny day, my wearing sun glasses and it being in the shade with no markings to make it more visable. This caused me to rapidly dismount, forward over the handle bars. Well it has certainly slowed me down.

After Ulli had lifted my bicycle off me, I got up and started a damage control check. Legs looked OK, a few superficial scrapes but nothing serious, waved arms about, seemed to be moving fine. Turned to bike, front wheel badly buckled, so much so that it was fouling the frame. Started to wonder about the my body again, ran a hand over each shoulder, left side just didn’t feel right, big bump mid shoulder. So we decided to take the bikes over to the shopping centre at Cameron Toll, lock up mine, then I would take the bus to the Royal Infirmary, Ulli could ride down.

Felt a bit odd catching a bus in cycling gear, but there you go. On the approach to the hospital I stood up and moved towards the door, gasped as the pain started to kick in, the driver slowed down and drove gingerly to the stop. I thanked him as I left. In A&E, I was asked what I wanted at Reception, I said I had probably broken my collar bone and could I see someone. I was asked had I been wearing a cycle helmet? No. Had I hit my head? No. After about 45 minutes I was summonsed to see a medic, who took me to a side room for a spot of prodding and poking, then off to X-ray, and sure enough I have a broken clavicle. Interestingly there was no follow up one the possibility of head injury. Maybe I should have said I had bumped my head (and been seen sooner) and added to the non helmet wearing statistics.

So for the next six to eight weeks, I will have my arm in a sling and enjoy the delights of one handed typing 🙁 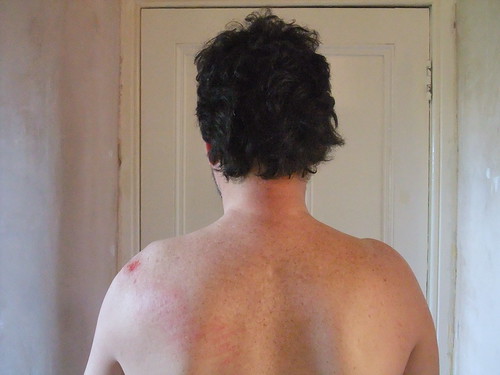 Addendum: This is how it looked from the inside: 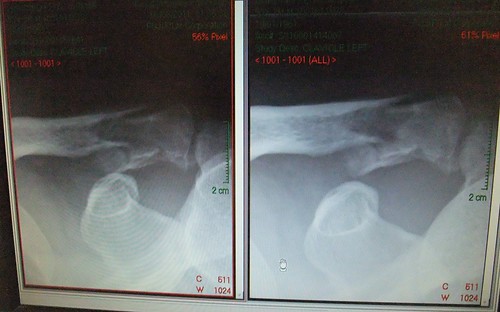 5 thoughts on “Slowed down…”