It has been a funny old year so far weather wise, summer arrived in April before the leaves were on the trees. This short summer was followed by a long extended autumn which started in May. Overall this has given frustratingly few opportunities to get out and do things, especially when one has been tied down with other things such as buying and selling houses. So it was that, with the forecast of fair weather, we grabbed the opportunity to take a day off and get out on the bikes. Ulli helpfully suggested that we do the T de F.

T de F, I thought heading off to the bathroom to prepare a B sample, where am I going to get EPO at this short notice? Then I thought, hang on a minute, the Tour de France, that great competition between cycle pharmacists, takes place in July not August. Suddenly the penny dropped, the T de F Ulli was referring to is the Tour de Falkirk in Fergal MacErlean’s wee book “Bike Scotland, 40 great routes form central Scotland”. That made far more sense.

So we set out under a gloriously blue sky for Haymarket station and the train to Falkirk. The train journey was straightforward, but, having arrived at Falkirk High Station, there was the small matter of which way to get out. The last time we had taken the train to Falkirk High, we encountered some difficulties with route finding, the book simply says leave by the pedestrian exit from either platform out onto Slamannan Road. So we asked directions and were told to cross to the north platform, as there was no exit from the south platform (the one you get off on when arriving from Edinburgh). This leads you out on to High Station Road, if you then follow the directions in the book you end up going in the wrong direction. Strangely there is a sign for the Union Canal pointing up some steps from the south platform, it turns out that this is the pedestrian exit. The problem is station staff see a bike, think like drivers and send them out via the car park, even though this involved carrying the bike out over the bridge between the platforms.

Having established the location of Slamannan Road, we were then able to take the right turn on to Glenbrae (B8028), up the hill to the roundabout at the top, straight over and down the other side. Heading down the hill I ignored the road forking off to the right and swept on round the bend at the bottom. As I did so, I heard a strangled cry from behind, looked over my shoulder just in time to see Ulli taking the fork to the right. Bugger, done it again, I thought as I turned round to go after her. Back on the right road again, we crossed over the Union Canal, this canal was built between 1817 and 1822 to link the Edinburgh with the older Forth and Clyde Canal. From a cycling viewpoint one of the interesting things about the Union Canal is that it is a contour canal, built without locks to control the level of the water, and so is flat all the way along its length.

Having crossed over the canal, the road climbs up through rolling farmland towards the Gardrum and Darnrig Mosses. Once an area of extensive raised bog, Gardrum Moss is now heavily cut over to provide peat for the garden trade. Fergal describes Darnrig Moss in summer as having a white fluffy blanket of bog cotton. Today, being mid-August, the Eriophorum is no longer fruiting, so no fluffy blanket, but the heather (Calluna) is in full flower and so the Moss is deep purple. 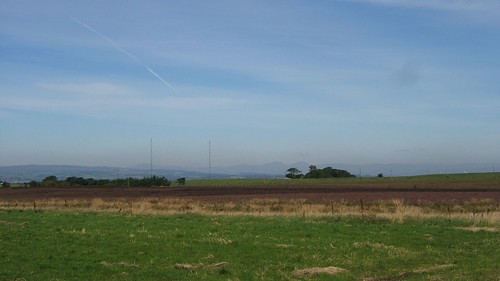 After the first photo stop we carried on to the end of the road to turn left at the T-junction, following signs for Avonbridge. For a while here the road turns satisfyingly downhill, with long sweeping turns. This enabled Ulli to clock 52.7Km/h, a new top speed for her. Sadly I don’t know how far or fast I cycle, as Ulli discovered the hard way that when removing a VDO cycle computer, twist anticlockwise or risk snapping off the locating lugs. In the meantime we swept on into Avonbridge, where we followed the road to a T-junction, turned left and then right after the Avonside Inn. This took us down Blackston Road, which twisted and turned its way out in to the country again.

Coming round a sharp bend, we found two tractors and a combine harvester completely blocking the road. It is a measure of just how bad the summer has been that there was barley still standing in the field waiting to be harvested. We stood and watched for a while as an extra set of wheels was added to the combine, then decided to squeeze our way through and carry on with our ride, unlike the motorists behind who just had to wait. The road shoogled about a bit more, up hill and down again before ending at Candie-end. Here we turn right and then took the next left into Candie itself, a wee collection of houses in a wooded setting, one of which was Candie House, but Hansel and Gretel were nowhere to be seen.

At the end of the Candie road we met the A801 and, following Fergal’s directions, turned right then immediately left onto a landrover track up a steep hill towards Muiravonside Country Park. Fergal had warned us that this track was unsuitable for road bikes, it would be fine on a mountain bike, so we got off and pushed the bikes up the hill. Reaching the top of the hill, we found that the track down the other side was closed due to subsidence caused by badger activity and we were diverted down a narrow path to the left. The path would no doubt be a delight to many mountain bikers, but was awkward when pushing road bikes which had to be carried over the more muddy sections. If I were to do the tour again, I would turn left at the A801, follow it for 250 odd meters, then turn right at the roundabout onto the B825. As it was, we picked up the B825 as we turned right out of the Country Park. A short way down the road we crossed over the Union Canal, and just after the bridge we were able to access the canal towpath. At this point the book suggests following the canal back to Falkirk. There is an option to take a different route out of the Country Park, following the River Avon to the Avon Aqueduct which is the longest and tallest in Scotland, then climbing the 80 steps up to the end of the Aqueduct before following the canal west back to Falkirk. Instead we followed the canal east, crossed the Aqueduct and cycled onward to Linlithgow. 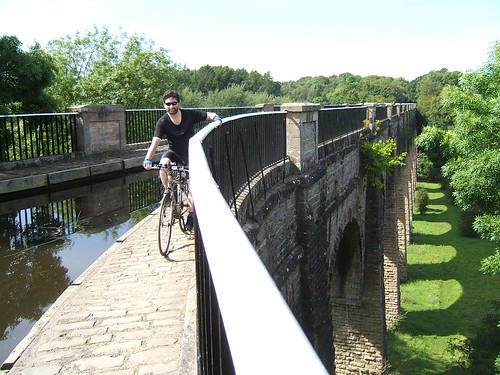 We could have followed the canal all the way back to Edinburgh, but as there was an easterly wind and we had other things to do later on, we turned off at Linlithgow and caught the train back.

This is what happens when you prioritise selfish adults in cars over children... it doesn't bode well for the future...

Why Beirut’s ammonium nitrate blast was so devastating
https://www.nature.com/articles/d41586-020-02361-x The tragedy is one of the largest industrial accidents involving the explosive chemical, and it hit Lebanon amid the coronavirus pandemic and an economic crisis

It’s time for @HistEnvScot to commit to maintaining current vehicle closures for High Rd/Saturday closures and to set a strategy for a car-free Park every day of the week. Let’s not be left behind. https://twitter.com/theroyalparks/status/1293110063138312192

@WillBlackWriter The bitter irony is that some of those Tories who have benefited most personally from immigration as refugees (or are their children) are the most vocal & vicious refugee bashers. Yes, Priti Patel & Daniel Kawczynski, that means the pair of you! Vile hypocrites.