For seven long years, I have had a pair of telemark skis sitting in a cupboard gathering dust, but finally they have tasted snow and found that it is good! I have long thought that Holyrood Park would be a good place for a ski tour, however there just hasn’t been enough snow. Yes, last winter between Christmas and Hogmanay there was plenty of snow in Edinburgh. Or so I have been told, but I was in Austria looking at green fields near Innsbruck, as the Föhn wind was blowing. Just to add insult to injury, our flight out of Innsbruck was delayed by three days as Gatwick was closed by snow! So this amount of snow in Edinburgh is something I have been waiting for, the last time I saw this much snow in town was February 2001, when 1 m of snow arrived over night, but that was before I had my own skis.

On Sunday, Ulli and I took a walk up to the Park, to see what the conditions were like. From a distance, it didn’t look too promising, but when we got there, we found there were lots of people enjoying the snow. I did think of going back for the skis, but ended up taking a load of photos instead. Then on Monday, I did look out longingly at Arthur’s Seat a few times, but was far too busy to go out and play. Today it just had to be done, so skis out of the cupboard and off to the Park at lunchtime.

We started off by practising a few turns on the closed section of road, which is now nicely pisted. I haven’t yet got the hang of telemark turns, but found that I could get away with just doing snowplough turns, not elegant but they work. Next, we headed down alongside Queen’s Drive, which was poorly timed, as we met a northerly squall coming the other way, trying to push us back up the hill. Oh well, no need to turn to control my speed after all. As we got to the bottom, we saw another skier going the opposite way, he was on x-country skis and moving at a fair pace.

Then came the boring part, the flat bit as you go round past the Parliament to St. Margaret’s Loch. I always loose Ulli on the flat bits as she goes shooting off, and today was no different. So I was relieved when we turned off by the Haggis Knowe and up into Hunter’s Bog. We had climbing skins with us, but the path wasn’t too steep and the skis were climbing well without them, so we just carried on, only stopping occasionally for photos: 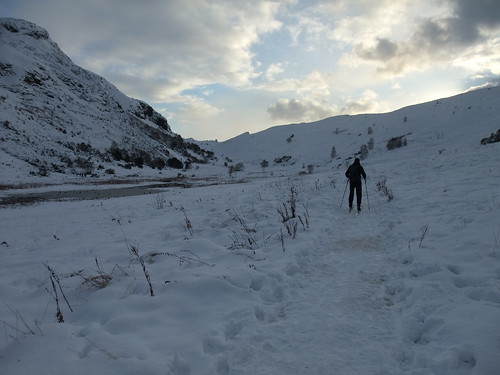 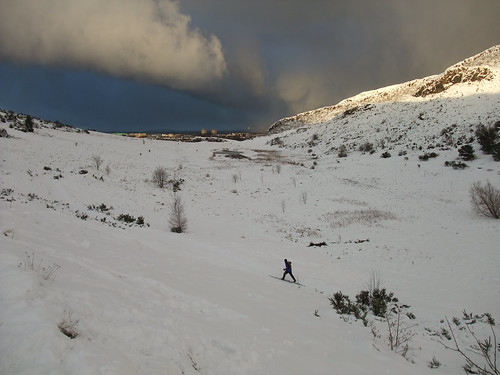 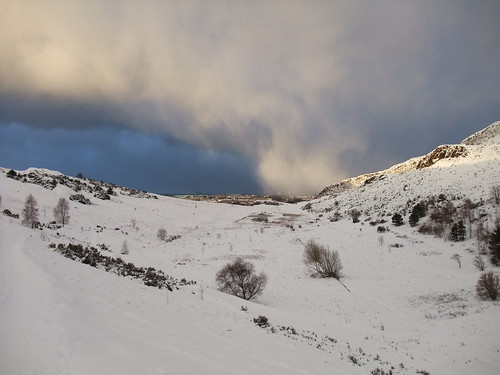 Looking back, we could see that there was another snowy squall coming, in the photo above it had just hit Restalrig. At the top of Hunter’s Bog there were kamikaze sledgers throwing themselves down the steepest part of the slope, by the zigzag path up Arthur’s Seat. So we chose to take the higher path leading to the wee bealach. As we reached the top, the squall overtook us. The sledgers took to holding their hands over their eyes to keep the snow out, I was glad we had opted for the high route. Over the bealach we threaded our way through more sledgers down to the road. Then across the park towards Pollock Halls, by the perimeter road, we took off the skis and walked home. There are people skiing along the pavements and along minor roads (which are untreated), but neither of us wanted to risk scratching the base of our skis.

Having gotten home, Ulli found the Tirol news website had a story on a new research report from the University of Innsbruck, about regular skiing being the best anti-aging activity. The study found that “Skiing reduces the risk of heart disease, lowers cholesterol, blood pressure, also acts as an antidepressant, and may even reduce symptoms of dementia”. Not surprisingly, the study was funded by the Austrian Ski Federation, it really just shows the benefits of regular exercise. But I take it as a reason that when there is snow on thick on the ground, ski touring is something which just has to be done. Now, if I can just get Historic Scotland (who manage Holyrood Park) to lay down x-country ski tracks…

Update 3/12/2010: Since writing this post there has been an increase in skiing in Holyrood Park (as we have had more snow), there is a report on STV (with video) of someone skiing off the Radical Road below Salisbury Crags, pretty but not very technical. This morning I watched three skiers descend from the top of the Lion’s Haunch to the park which is far more technically challenging.

Love to make the world more habitable by filling every inch of it with cars. NO PEOPLE ONLY CARS GO VROOM VROOM https://twitter.com/gringolito/status/1310629758229778434

Brexit: The worst is yet to come https://fedtrust.co.uk/brexit-the-worst-is-yet-to-come/ A cheerful spot of light read... Sad true the worst is still to come

Once the #Brexit dividends start kicking in, such as unemployment, food shortages, medicine shortages & martial law, remember to gaze fondly at your framed poster of Johnson & Cummings and bask in the knowledge that they’re not hungry, cold or skint, thanks to your devotion.

Imagine how nice Broughton Street would be if some thought was given to pedestrians and cyclists.
#Edinburgh

Just had a look at the cover of the new book - ‘How Britain Ends’ - scheduled for publication in February. Thanks to everyone at Head of Zeus and to Boris Johnson for being such an inspiration