After a week of watching the weather forecast, the three of us, David, Ulli and myself, set out for the border to pick up the CC Relay Jersey. We had been hoping for blue skies, sunshine and light winds, what we got was partly clear skies with the threat of showers and strengthening winds. The plan was simple, cycle out from Edinburgh over the Lammermuir Hills and down to Coldstream to meet on the bridge over the Tweed to collect the Jersey. The forecast on Saturday morning was showers moving away to the south and 8mph westerly winds gusting to 21mph. This didn’t sound too bad, so we decided to go with the plan.

We headed out of Edinburgh through Holyrood Park along the NCN 1 cycle route, a mixture of off road cycle paths and quiet roads. On the western edge of Whitecraigs, we departed from NCN 1 and headed off across country towards Gifford, where we planned to make a cake stop. As we approached East Saltoun, a car with an amber flashing light came the other way, being chased down by a crowd of roadies. 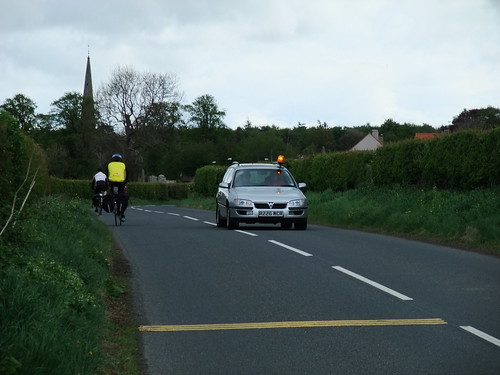 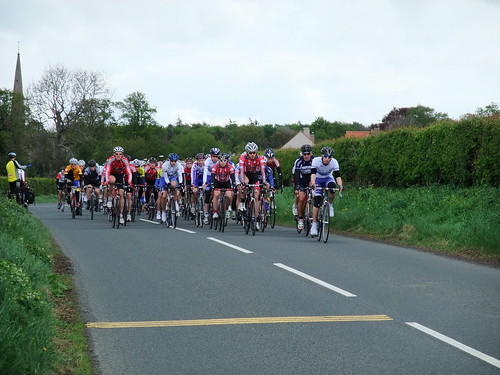 This turned out to be the Musselburgh RCC British Eagle 62 mile road race, which had just started from East Saltoun.

This early part of the ride was easy going and we were making good progress, so we dodged round Gifford and headed for the Lammermuir Hills without the cake stop. As we climbed above Danskine, we started to notice that the wind was somewhat stronger that we had been led to expect, over 20mph gusting over 40 mph. We stopped for a bite of lunch before tackling the first big climb of the day up Wanside Rig, a mere 17% gradient. Unfortunately on the steepest part of the climb the road turns westerly, straight into the wind, and we were all forced to stop. After a short walk, we were back on the bikes and heading on to the top, where we had to decide whether to carry on with the exposed high route or whether to take the lower sheltered route (which were planning to come back by). We decided to stick with the plan and take the high route, so began a titanic battle with the elements. 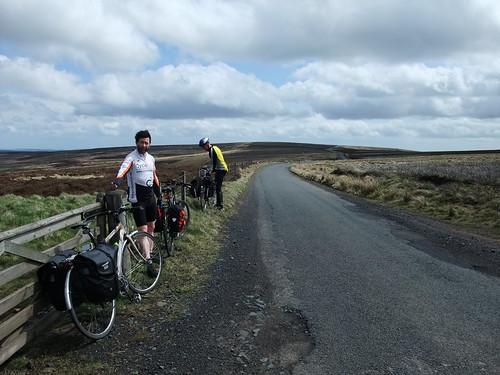 The Lammermuir Hills might only be 500 m high, but there is a good reason why they are popular with developers of wind farms, as we were about to find out. As we cycled across the tops, we had to keep to the middle of the road, so as not to be blown off the side in the gusts. After crossing Herd’s Hil, the road drops on a 15% gradient. I set off at speed, half way down I was travelling at over 50 Km/h (>30 mph), but had the disconcerting experience of being hit by a gust of wind which reduced my forward speed to 10 Km/h!

We then had a couple of Km sheltered by the Killpallet Heights before climbing up Duddy Bank, another 17% gradient. Only this time we had the wind behind us, I do love wind assisted climbing, it is like having a giant hand pushing you up the hill. Once on the tops again we at the mercy of the wind, and there were times when I could hear my bike chain rattling in the gusts. The landscape surrounding us was spectacular, it was just a shame that we were too busy trying to stay upright and moving forward to fully appreciate it. Nor were we the only ones to be up there, we did meet a couple of walkers and some other cyclists, but we were the only cyclists to be lugging fully loaded panniers.

Finally we dropped down into Longformacus, the Southern Upland Way crosses through the village and there is a small shelter with a map and leaflets. We stopped to take a look, and as we did so a few drops of rain began to fall. David and Ulli dug out their waterproof trousers, I only had a pair of bibbed longs with me and decided that, as it was only a passing shower, I would wait it out. However, whilst up on the tops I had been so busy fighting the wind that I had failed to notice the dark clouds to the south of us. The rain seemed to be easing off, so we set off south, only to catch up with the rain again. We rode on through the rain, discovering the other thing I had failed to notice from the tops, Hardens Hill. It’s only 320 m high, but that was high enough in steady rain, coming down the other side at a steady 50 Km/h was interesting.

I had to keep pedalling to keep warm, this meant that I lost Ulli and David, but eventually I reached a junction where I had to stop and wait. Fortunately they weren’t too far behind. We pushed on through Duns, which also meant we pushed on further into the rain front. Fortunately the front managed to get away from us a few Km south of Duns, and we mostly dried out again over the remaining 15 undulating Km to Coldstream, with only our shoes still wet.

Having arrived in Coldstream, we booked into our B&B, the very cycle friendly Haymount House. I tried to phone Jez who we had come to meet, only to find I had missed a digit when storing the number in my mobile phone. Fortunately two minutes later he phoned me to say that he and Graham were ready to meet us at the bridge and hand over the relay jersey. This was good, as the whole point of making the journey was to pick up the CycleChat Relay Jersey, which is making it way, slowly, around Britain (and maybe beyond). After a cup of tea, we set off again for the bridge. There, standing mid way over the River Tweed, on the border between Scotland and England, the Jersey was handed over. We then went to the “Welcome to Scotland” sign (there are no Welcome to England signs) for some more photos, agreed to meet Jez for dinner (Graham having pedalled off back towards Newcastle), and returned to the B&B for a long hot bath to sooth the aching muscles, before dinner. 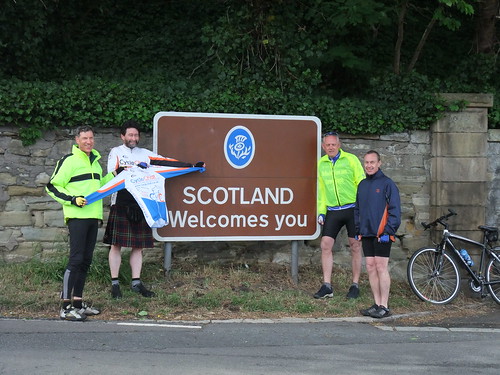 A map of the route can be found here.

@thecockburn The cleaner air, bird song, less frenzy and a pace of life more in tune w/ nature struck a marked and profound chord w/ folk. The community coming-together solutions for Covid showed the power and freedom of a healthy, resilient local and made achievable climate aims visible.

A new poll released today shows three-quarters of people living in Scotland believe the Scottish Government should prioritise measures for a green recovery from the coronavirus pandemic.

You can guarantee that Scottish journalists will be *discouraged* from asking about this when Sunak visits Scotland...

75 years ago, the atomic bomb fell on Hiroshima. But the immeasurable suffering began years earlier in the Congo, where the radioactive ore was dug from the ground by forced labour under Belgian colonial rule. https://www.bbc.com/future/article/20200803-the-forgotten-mine-that-built-the-atomic-bomb

Looks like some parts of Edinburgh, actually most towns and cities in the UK have areas like this. Why do we put up with such poor living conditions? Of course it afflicts the poorer areas worst, one of the reasons that have worst health out comes...