The more observant readers among you will have noticed that there is a now a weather report for Innsbruck in the sidebar of this blog, this is because Ulli and I are on holiday in the Austrian Tirol.

So day one, as always we were keen to get out and about doing things in the mountains, so as a warm up we decided to go out for a quick ride. Fortunately we were able to borrow a couple of mountain bikes and Ulli’s cousin Bernhard was keen to come along as a guide. Digging the bikes out of the basement where they live, I was pleased to see that the Rocky Mountain Elements bike which I was borrowing had been recently upgraded with disk brakes. The benefit increased control when braking far out weighs the cost of extra weight, in my opinion.

Bikes out, adjustments made, and we were off across the Absam fields, down the new path to cross the Weissenbach (good first test for the disk brakes) and up into Mils on the far side. From Mils we took a path around the edge of Milserwald. This forest area sits on a terrace left behind by the last ice age, and is a great recreation resource for the local area (possibly why Absam and Mils are now among the most expensive places to buy a house in Austria). Coming down the track towards Milser Eiche, on the SW corner of Milserwald, Bernhard and I were racing ahead (as usual) when we came across a Nordic walker coming the other way, who was (as is often the way with Nordic walkers) taking up as much of the track as possible, another good test for the disk brakes.

Having stopped by the big oak (known locally as Milser Eiche) to look at the view across the Inn to Volders and Glungezer (and waited for Ulli to catch up), we skirted round the southern edge of Milserwald to the pretty village of Baumkirchen. From here we picked up the cycle route, along a quiet stretch of road, to Fritzens. After Fritzens, Bernhard decided that rather than follow the cycle route along the road to Terfens, we should go cross county using a series of unpaved tracks. This proved to be much more entertaining, in particular the way Bernhard would cycle round in big circle each time we came to a fork in the track. He claimed he was changing down gear in order to be able to tackle the climb (if we were to turn that way), but I suspect that he was just lost and trying to remember the way.

At Terfens we stopped to have drink from the drinking fountain, of the type with a hollowed out log for a trough which are so common in Tirol, the water is always fresh and cold. This also meant that we neatly avoided being run over by a Dutch motorcycle club, which came noisily through the village. Drink stop finished, we turned north and headed up hill out of the village. This hill gets increasingly steep as you travel north. On a previous ride, I had had to get off and walk the last part, but not this time. We then turned off to Maria Larch (Mary of the Larches, a small church), this time instead of turning off the road to go cross county (on a track which is in winter a x-country ski trail) we continued up the road to Eggen. 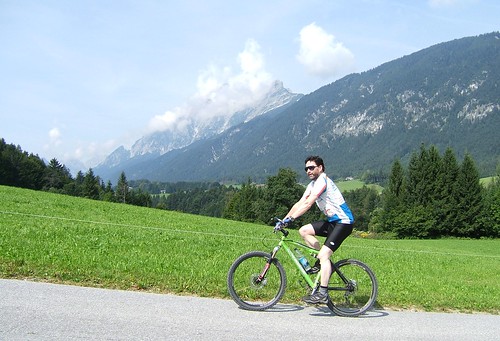 From Eggen we cycled on along quiet roads through fields full of horses to Gnadenwald, joining the main road again at St. Michael. As road riding on mountain bikes isn’t as much fun as trail riding, we turned off the road again, after about 1 km, at St. Martin.

Following the off road trail, Bernhard and I raced off ahead again as usual, after we crossed the dry riverbed of the Fallbach I stopped to wait for Ulli. I heard a loud skidding noise and thought that sounds impressive, then silence. After a minute or so, Ulli still hadn’t appeared so I went back to have a look, and found Ulli standing by her bike with grazes on her arm and knee. Ulli said she was fine and so we cycled on to where Bernhard was waiting. Then Bernhard and I decided that it would be best for Ulli if she were to go to hospital to get her wounds cleaned up, so he went off to get his car and Ulli and I made our way to the nearest car park, a few minutes away.

Taking Ulli in to hospital, I expected them to just clean her up put on a dressing and send her home. So when she came out of the treatment room with a bandage on her arm and knee, I thought that’s it over, lets go home. But she said she had to wait and see someone else as they wanted to put her leg in plaster for ten days, as she had hole in her knee close to the Bursa synovialis (or in German: Schleimbeutel, which translates literally as slime bag) and they felt it would heal faster if the knee was immobilised. Poor Ulli…

Thought I knew a lot about the First World War but didn't know that Somalis were fighting in the trenches of Verdun.

Retweet please if you don’t believe the NHS will be safe in Johnson’s hands. https://www.theguardian.com/society/2020/jul/10/boris-johnson-plans-radical-shake-up-of-nhs-in-bid-to-regain-more-direct-control?CMP=share_btn_tw

“Don’t worry, you”ll understand when you are older

I’m older, it’s 2020 and I understand absolutely nothing.