Sunday, Scharnitz, the crack of dawn.

OK so it was more like the crack of 09:30, but that is early enough for a Sunday morning to be dragging a couple of mountain bikes out of the back of a car. With Ulli laid up for the week following her wee accident (see Tales of the Tirol, part 1), Bernie had driven us round to Scharnitz, the self-styled gateway to the Karwendel Alpine Park. This is one of the largest areas of wild land in the Alps, and a great place to go mountain bike touring. Having parked up at he old skiing car park (the chair lift has now gone and the piste is steadily being invaded by trees), we cycled into the village (950 m a.s.l.) and out the other side, past the big car park where the Germans pay to park. As it was still early, the car park was only half full. The road up the first hill out of the village is tarmac and no great challenge, just use the granny ring and keep pedalling. For those who do decide to stop, there a is a field on the right (980 m a.s.l.) usually occupied by some Tyrolean Haflinger horses which are very photogenic, so you can always make out that it is a photo stop rather than a rest stop.

Not far beyond this the tarmac gives out and the road divides, you can go north along the Karwendeltal or east along the Hinterautal, above a gorge with spectacular views down to the River Isar. At this stage it is hard to believe that this is the same river that flows through Munich. Before long the road forks (1069 m a.s.l.), and you have the choice of continuing east along the Hinterautal and following the Isar to its headwaters, or you can drop down and cross over the Isar (1022 m a.s.l.) and follow the Gleirschbach up Gleirschtal into Samertal. For those yet to make their mind up this is a great place to stop and take a few photos.

Whilst we were stopped to take in the views and a few photos, Bernhard sadly remarked that the bike I was riding no longer turned heads the way it once had. He had built it some years ago for his father, who wanted to be able to cycle into remote areas for spring ski mountaineering trips. His father had been rather generous with the budget and Bernhard took the opportunity to build a very high spec bike. I remember how, when I first rode it about five years ago, it really used to turn heads. For those who are interested, it was based around a Rocky Mountain Elements full suspension frame, there are various pictures of it in the ubiquitous blog photo archive. It is still a great bike to ride, but nowadays people seldom give it a second look, not that that bothers me, I just like riding it…

After crossing the Isar (1022m a.s.l.) the way climbs steadily upward, gently at first but after a while it gets increasingly steep. So at first I was having no problems in keeping up with the riders ahead, which was a good feeling, but progressively I started to loose ground. Then I saw that I was slowly gaining on one rider ahead, good I thought, here is my chance to overtake someone going uphill. However, as I got closer I realised the rider I was trying to overtake was no more than 10 years old, so I was still the slowest adult on the hill. Time for a new strategy. I picked an object in the not too far distance, a tree or a rock at the side of the path, told myself that I just had to get there and I could think of having a rest. Of course having reached said object, I would tell myself “not yet, just a wee bit further, try and get to the next corner”.

Rounding the corner, the road got even steeper and seemed to disappear into the trees. I got half way to where it seemed to disappear and stopped for a drink, much to the bemusement of a six year old who blithely cycle past (aided by the odd push from dad who was cycling alongside). Mounting up again, I cycled on to that point where the road seemed to disappear to find that a) it was only about 100m away from where I had stopped and b) the road levelled off (1137m a.s.l.) and the cycling was really easy again. The road was climbing more gently now along a long straight, the Gleirschbach was gurgling away, the sun was shining and all was right with the world.

After a while (and after another short climb) the glen widened and the forest gave way to open meadows. Here alpine cows grazed contentedly (fenced in by electric fences), their bells clonking melodically, well as melodically as a cow bell can clonk. This signalled that we were nearing Mösl Alm (1262m a.s.l.). For those not familiar with the Alps, an Alm is (or was) a small farm only occupied in summer, where cattle are taken to graze the high pastures. Nowadays these Alms often have small (or not so small) restaurants attached to them and maybe basic rooms to let. Some of them have given up the livestock farming element altogether and just stick to servicing the needs of weary travellers (or fleecing tourists depending on your point of view). Personally I find the prospect of a decent meal and a beer, while surrounded by fantastic mountain scenery, after long walk or a cycle, rather an appealing one (especially as the prices usually put the cost of a pub lunch in the UK to shame). In addition, the working Alms also help to maintain the floristically rich alpine pastures which would otherwise disappear under rank vegetation and eventually trees. This leads to a loss of biodiversity which is currently occurring across the Alps. So it was that we decided to stop for an early lunch. The place was busy, mostly with cyclists, as the walkers were still on the trail making their way there. 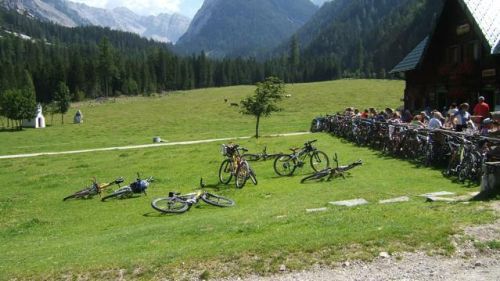 Lunch finished, we set off again, aiming to get to Pfeis Hütte (1922m a.s.l.) at the head of Samertal. About 500m (1320m a.s.l.) after we left Mösl Alm, we came across a sign telling us that there was 300m of bad road ahead, but after that it was a motorway all the way to Pfeis Hütte. 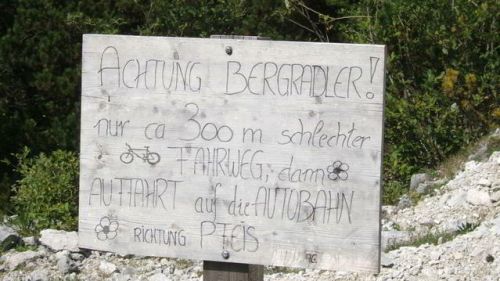 Sure enough, the track became very rough, and it continued to be rough until the turn off to Hafelekar Spitze. For any of you who ken Innsbruck, that’s the big mountain the cable car from the centre of town goes up. Obviously we were on the far side of the mountain from Innsbruck. Shortly after the turnoff, we meet a couple coming the other way with a small child in a bike trailer (something like this), heading in the opposite direction. There is no way they could have come up the rough section of path (and they couldn’t have come over Hafelekar Spitze either), so we guessed there must be another way back to Mösl Alm, but couldn’t find it on the map. 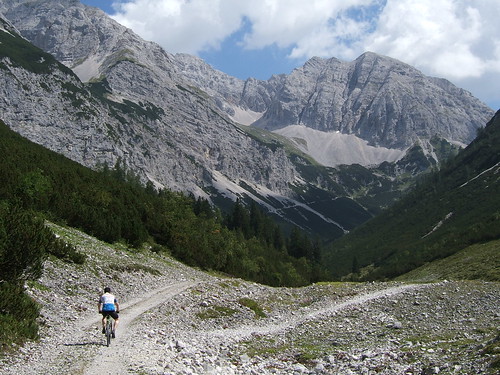 We continued on to where, at about 1600m a.s.l., the track goes up a large hairpin bend. At the bottom, to one side, there was a bike parking area with about a dozen bikes in it. The track going up looked rough and steep, Bernhard didn’t think he could make it up on his non-suspension bike (he had struggled on the rough section earlier). So he borrowed the full suspension bike which I was riding, to go scout it out, while I wandered off to take a few more photos. After about a quarter of an hour he reported back that the track was really rough and that he wouldn’t be able to make the last 1 km or so to Pfeis Hütte on his bike. So we decided to leave a visit to the hut for another day. The ride back to Scharnitz was a real blast…

For a kml file of the route see here, please note my GPS is a wee bit old and doesn’t get a very good signal where there are trees.

One thought on “Tales of the Tirol, part 2: Into the Karwendel”

Christ on a bike BBC. What is wrong with you?
Could you not just celebrate an efficient, convenient clean form.of transport which makes the user healthier for one day and not just put the irrational ranty boot in? https://twitter.com/BBCRadioScot/status/1268090661087129600

So when are we going to see this along the arterial routes Edinburgh? @adamrmcvey @lmacinnessnp we need more than just words, @MathesonMichael has given you the money & the powers to do it (in the short term) now we need to see action

@grahamspiller @CostaCoffee One of the stupidest things you could do as a coffee manufacturer. There's always alternatives and cyclists love their coffee and cakes!

I understand @CostaCoffee might well have some issue with people not being sealed in a motor vehicle but this reply is really poor. Somebody paying VED on emissions doesn't come into it. 🤷‍♀️

I’m always all for data and surveys as they do help in collating a convincing and trustworthy argument. But it is still depressing we have to run such stats to prove the flippin’ obvious, to try and get Councils to act 🤦🏻‍♀️ https://twitter.com/martinkeyBC/status/1268471619284058116