There has been a real sense of hope in the air, cycling was/is on the up following the Olympics. There was talk of a Golden Legacy, which seemed to have some support from the City of Edinburgh Council. It seemed there was a chance that Edinburgh could really become the cycle friendly city that has so long been promised, it is after all the only city in the UK to have signed the Charter of Brussels. It has also committed 5% of its Transport budget to cycling and drawn up an Active Travel Action Plan.

All in all, you might expect that Edinburgh is in a good position to become Scotland’s top cycling city. However, things are not as good as they should be, the money may be there, but what is it being spent on? Well, recently we have seen the opening of the so called Quality Bike Corridor (QBC), built at a cost of £650,000. Now, with a name like that ,you’d expect something really special. You’d expect the local cycling community to be jumping up and down with excitement, but I am not, and I am not alone in my disappointment. I have recently discovered that this route has been 27 years in planning, and that the original 1985 plan was considerably more ambitious that the current miserable effort. Something has obviously gone badly wrong!

As if this wasn’t enough, there is the case of Leith Walk. Following the decision not to take the new Edinburgh tram “network” down Leith Walk, this road now has to be re-developed. This should be an ideal opportunity for the Council to show some commitment and add in some good quality cycling infrastructure. This is something which the local residents named as their top priority in the consultation on the re-development of the area. However, the council planners seem to have decided to totally ignore the local desire for good quality cycle infrastructure alone the entire length of the road, and instead have planned for just a short bike lane between the two roundabouts at the top. This is according to a leaked document, I don’t have any further details at present. 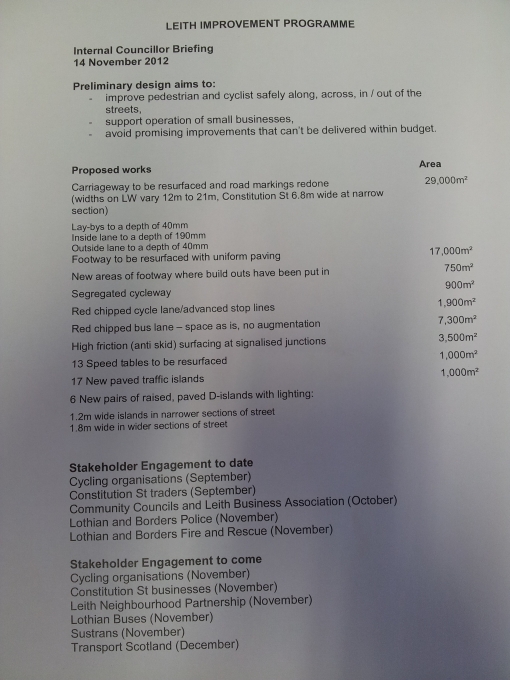 At this point it needs to be made clear that the Council’s Active Travel Action Plan is now aimed at 15% of commuter journeys to be by bike by 2020, rather than 15% of all journeys (in other words, a 15% modal share for cycling). This means the Council is not interested in achieving a modal shift by making the roads safe for family cycling, as has been done in every place where cycling levels are high. The question is: who are facilities like the QBC for? “Experienced, confident cyclists”, according to the plan – who are they? The road warriors, the club cyclists, the MAMILs who are cycling already? But these groups (tribes?) will cycle without £650,000 being spent on some coloured tarmac, and a poorly designed junction at KB. Also, it is very unlikely that this group will expand to 15% of commuter journeys in a few years’ time, let alone 15% of all journeys. It is currently not safe for family cycling. We have seen increased interest in cycling in the past, similar to the current post-Olympic boom, which failed to result in large increases in modal share (whereas commuting modal share has increased slightly over the last decades). The modal share in Edinburgh remains stubbornly around 2%, as the majority of the population don’t feel it is safe to cycle on the roads. If we want to change this, we have to make riding a bicycle as a means of transport safe, convenient and easy for everyone, not just “experienced, confident cyclists”.

According to Prof John Whitelegg, speaking at a recent conference, politicians think that 60% of citizens prefer motorised travel, whereas only 15% of citizens actually do. He is also on record for saying there is no reason why we can’t have 20% of trips by bike by 2020, we just need the political will to do so. Of course, things are not helped by the Dutch saying that it takes 20 years to get to where they are in terms of infrastructure. This maybe so when you look at changing transport infrastructure over the entire country. But at a local level, changes can happen much faster by using temporary measures, such as white paint and plastic bollards to create safe space, as has been done to great effect in New York. The effect of these simple measures had a dramatic effect on the local economy, with retail sales increasing by up to 49%. So you would think this is something that the City of Edinburgh Council would be grabbing with both hands. Instead, Edinburgh is spending £55,000 a week on “free parking” as a part of the “Alive after 5” campaign. Newcastle has experimented with the same campaign, but couldn’t split how many people came by bus, bike, on foot, etc. Basically this is money just thrown down the drain.

Edinburgh is recognised as being the best place in the UK to live, so why is the Council looking to places which are not as good? To make Edinburgh a better place to live, we should be looking outward and copying ideas from cities which are recognised as being among the best places in the world. Places like Copenhagen, a city that owes its success to the ideas of Jan Gehl. A man who told the Sir Patrick Geddes Commemorative Lecture 2012: “Edinburgh looks fantastic from the air, but if you go to eye level it looks neglected and treats people as sheep”. He has “been coming to Edinburgh for 47 years, this is a city that needs to take power from traffic engineers”. He says that “lists of most liveable cities in the world don’t include Edinburgh or other Scottish or UK cities.” In order to change this, “there is a need for political commitment to working towards becoming the most liveable city in the world”. So there we have it, until the Council starts looking for ideas from places that have a proven track record of being the best places in the world to live and stop treating people like sheep, they will continue throw council tax payers’ money down the drain!

5 thoughts on “The QBC to Leith Walk, where did it all go wrong?”

More bundles of bike themed face masks away in the post 😍😍 between pedaling my push bike in this glorious weather and pedaling my sewing machine at my kitchen table, lockdown is busy 😊 just how I like it. #isewlation #HustlingHard #BikesBikesBikes #lovetopedal

@DeborahMeaden @BorisJohnson This is for you, I’m not letting him get away with it.

So, is your MP letting Cummings get away with it? Relying on boredom and short attention spans? We shouldn't let them. To be clear, the damage to trust is laid squarely @BorisJohnson door and his failure to place Country above one Individual. if we let this go its what we deserve

What do you do when your village becomes a site for disaster tourists?

After the 2006 mudflow disaster in Indonesia, Harwati had no choice but to work as a local tour guide, showing people around the vast mud field that destroyed her village. Full film: http://aje.io/vdfg4